Andi, 49, is best known for presenting the competition segments on Good Morning Britain and has managed to keep the nation entertained during the lockdown period. As routine, today he crossed over with hosts Piers Morgan, 55, and Susanna Reid, 49, on several occasion to inform ITV viewers of the prizes they could get their hands on. For most of the programme, his stints had gone to plan, with no technical blunders whatsoever. However, he was caught completely unawares moments before one of his last appearances as he suffered a rather “wet” incident.

For the past few months, Andi has been presenting the competition segments from his garage at home, which has left both viewers and his co-stars rather amused.

With the weather still holding out, for now, the presenter decided to venture outside to speak with viewers.

Today, he as in his garden, surrounded all a whole array of flowers and bushes, but he didn’t know about one particular feature lurking in the grass.

This led him to be blasted with a water sprinkler just moments before speaking with Piers and Susanna, leaving his soaking wet. 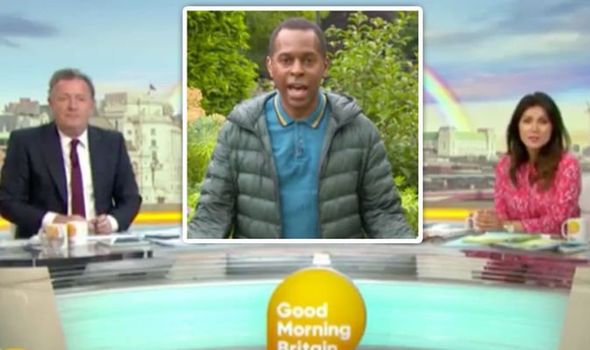 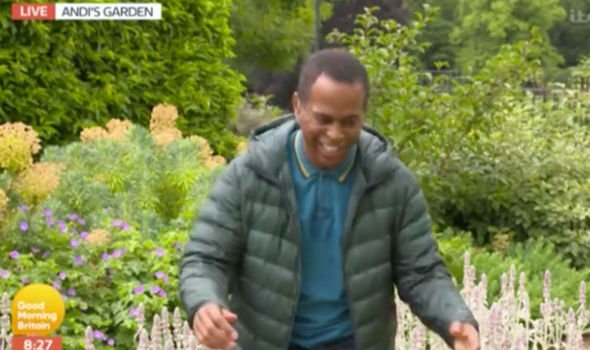 Introducing the competition, Susanna handed the reins over to her colleague who looked rather bewildered.

“Good morning,” he replied, before adding: “We’ve just had a rather unfortunate incident with the automatic sprinklers.

“I am literally drenched,” he remarked, with his coat sagging from his arms and his co-stars in hysterics in the studio.

Putting his hands to his head, the presenter chimed: “This is unreal,” before going on to give the details of the prizes on offer. 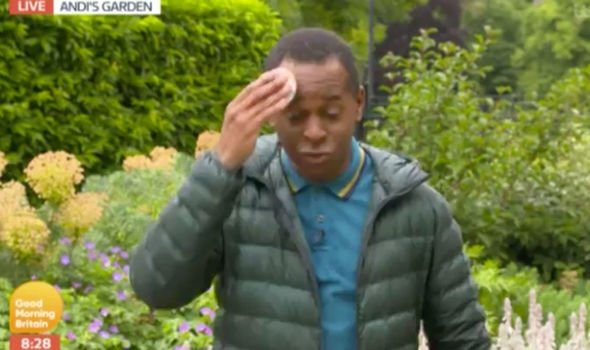 I’m just drying myself off

Following the prerecorded video of the competition details, the shot returned to Andi pressing his face with a towel.

“That’s right, I’m just drying myself off,” he told the hosts in the studio, adding: “It was literally like a Carry On sketch.

“There was water everywhere,” he said, before composing himself and wrapping up his stint on the show today.

During his time away from the studios, the presenter has suffered all manner of technical blunders and difficulties.

Last month, he was caught unaware when RadioX star Chris Moyles, 46, decided he’d made an impromptu call to his colleague.

What the latter didn’t realise was Andi was just about to speak on Good Morning Britain and on answering the FaceTime, the presenter said he would keep the call going during his appearance on live television.

The radio personality said he wouldn’t shout or disrupt him, but he still managed to cause some mischief.

Although viewers of the ITV show couldn’t hear what was going on, the presenter was well aware of what the caller was doing.

Messing around with technology, Chris blasted out several inappropriate sounds bites to try and throw the presenter off.

Andi remained professional, however, and seemed resilient to all the humorous noises going off in the background.

With the competition segment just one of the reasons viewers tune in, Piers and Susanna explained earlier on in the show they had their best viewing figures ever for Tuesday’s instalment.

The former thanked those watching at home for tuning in, stating he and his colleagues would keep informing them on the latest developments from across the globe.