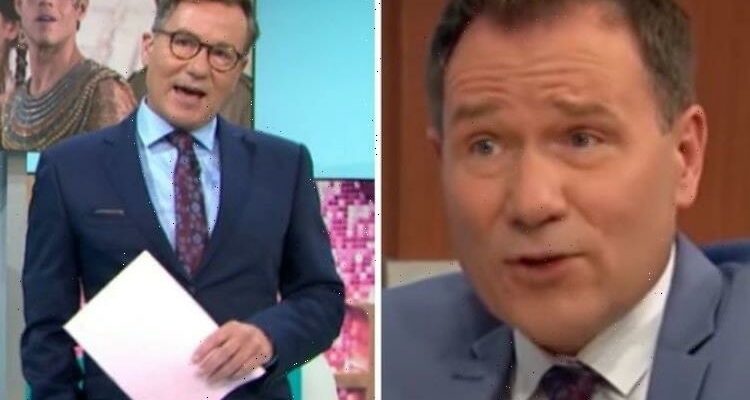 Richard Arnold has been a staple on Good Morning Britain since 2014. Before that, the showbiz editor presented the entertainment news on the ITV breakfast programme, Daybreak before it was axed in 2014. During Richard’s time on GMB, he has interviewed a host of famous faces including Jennifer Aniston, Cate Blanchett and James Bond star Rami Malek.

Over the years, GMB has seen a few changes including a shake-up of presenters.

However, in an exclusive interview with Express.co.uk, Richard recalled how the breakfast show has changed over the years.

He began: “When Kate [Garraway], Ben [Shephard] and I first started doing that show. I’ve been on it since 1997.

“The format has changed a lot over the years.”

He continued: “Kate is brilliant she always says to me because obviously, we’re all mates we’ve known each other for so long, ‘Do you think we’ll see the end of linear television?’ and I said ‘We might do.’

“But it has changed a lot. I mean when you think about the old days when it was all scattered cushions, chatting about Steve McDonald and who puts their wheelie bins out.

“The world has become a different place and I know the show heartily reflects that.

“That is the point of Good Morning Britain, it does absolutely reflect the conversation that has been having on it is being had over breakfast in people’s homes at that very moment.”

“It’s not presenting television as we think you should see it,” the showbiz editor added.

Richard had worked alongside, Susanna Reid, Kate and Ben for years. He also worked closely alongside Piers Morgan before his sudden exit in March.

Piers decided to quit his role on GMB after clashing with his co-star Alex Beresford.

The 40-year-old sparked backlash from ITV viewers after he questioned some of Meghan’s claims in her Oprah interview as false.

Piers’ remarks led him to storm off the ITV set and as a result, he decided to leave his role on the breakfast show.

ITV hasn’t replaced Piers with a permanent presenter, although ever since his exit, the show has welcomed a number of guest presenters.

Adil Ray, Richard Bacon and Alastair Campbell are a few of the names who have co-hosted the show so far.

The host continued: “I think it’s a roster of very impressive names that have taken up his seat in recent months.”

Richard went on to add he wouldn’t want to replace Piers, as he joked: “I love the tinsel too much.

“I love being just at the edge of the frame and surfing the frost.

“I love the tinsel. That’s always been my job and I’m very happy doing that for as long as they’ll have me.”