“Yo it’s your girl Goldie I’m about to kill shit today.” Goldie (played by fashion model Slick Woods in her first movie role) is a lot like the film that bears her name: full of attitude, bursting with scrappy New York style, and stuck under the thumb of a merciless system that won’t let her shine like she knows she can. At least this movie believes in her, because no one else will. No one else except maybe pint-sized fans Sherrie and Supreme, both of whom worship their 18-year-old half-sister like Goldie is already the world famous hip-hop dance star she fantasizes about becoming. But when their mom gets arrested and Goldie tries to keep her little siblings away from the long arm of child welfare services, it isn’t long before the urgency of her real life begins to chip away at the possibility of her dreams.

Written and directed by Dutch filmmaker Sam de Jong (“Prince”), who shoots the upper tip of Manhattan with a vaguely foreign sense of dislocation, “Goldie” explodes with energy and hope. Some of that urban verve is manufactured in post-production; as Goldie and her sisters run around the city, de Jong outlines their bodies with bright, wiggly blasts of drawn-in color. A body-moving beat pumps away on the soundtrack (the ambient music here is courtesy of “The Rider” composer Nathan Halpern). Every time a new character is introduced, the movie captures them in a freeze frame while either Sherrie or Supreme shouts out their name in a singsongy voice like they’re making a new friend at school. De Jong isn’t out to make his own “Run Lola Run” (as preferable as that might have been), but he flakes “Goldie” with a pop style that speaks to its heroine’s natural buoyancy even when she’s adrift in some very choppy water. 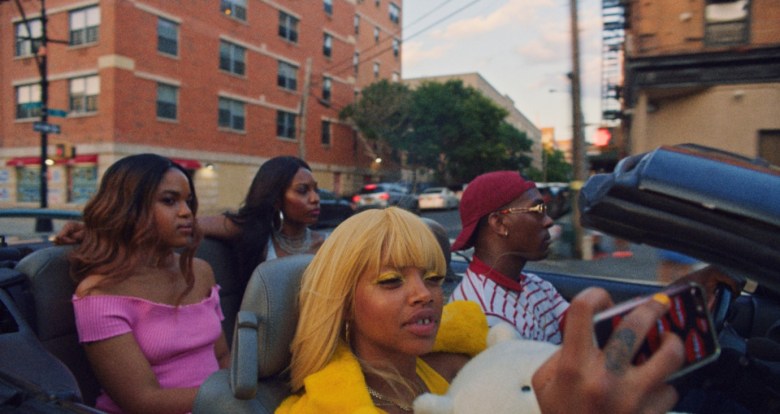 Ultimately, however, most of the film’s vitality and ride-or-die sparkle comes from Goldie herself. It’s hard to know what came first — the name, or the close-shaved yellow hairdo and eyebrow combo that pops like champagne against her brown skin — but it doesn’t matter: Either way, Goldie is a star. She’s a local icon. She’s a brand in the making. And she feels like selling her persona is the only thing that might be able to afford her a better life, and make it so that her mom and sisters don’t have to share a single room with a low-rent drug dealer named Frank (Danny Hoch).

The fact that Woods has already made it (and with an incarcerated mother of her own) only adds to the perfection of her casting; even without the meta elements, which underline the extent to which America’s disenfranchised look to pop culture as a pipeline to salvation, her performance is beautifully expressive and open to the world. She wears all of Goldie’s desires and frustrations, and radiates the same conviction when she’s talking about her dance skills as she does when she’s begging a pharmacist for access to an inhaler so that her asthmatic sister can breathe again. The movie rises with her hopes, sags when they deflate, and holds its head up with the same take-no-shit approach that she throws to anyone who gets in her way (“You’re fucking lucky I’m still on probation!” she yells at a girl who tries to start with her). 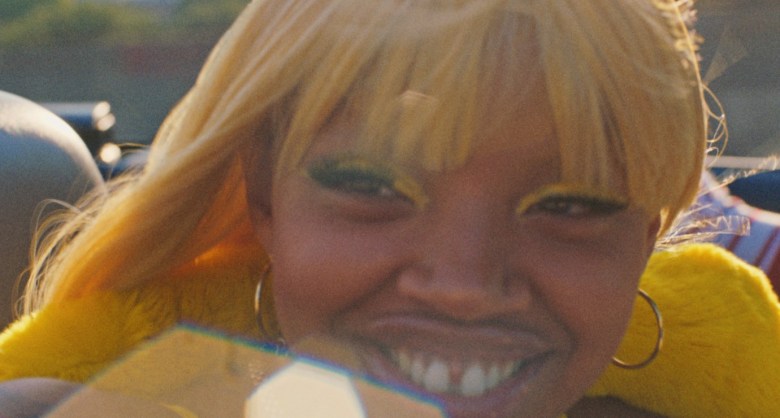 The plot is both exceedingly simple and dependent on a major contrivance. There’s never a good time for someone’s mom to get arrested, but it feels like a stretch that it happens to Goldie on the same day that she’s scrambling to get ready for her breakthrough music video. The gig isn’t guaranteed quite yet, but some guy keeps telling Goldie that he can get her a featured dance spot in an upcoming shoot for a rapper named Tiny (A$AP Ferg). Goldie, who swears by the power of her image, is convinced that she can’t show up to set without this bright yellow mink jacket that she’s been eying for most of her adult life. And it isn’t long after she takes her sisters on the lam that Goldie— desperate to keep her remaining family together — starts wondering how best to spend what little money she’s got (or is going to get from selling her mom’s leftover painkillers). Is that coat more valuable than a safe night’s sleep somewhere? Than a hot meal for her sisters?

“Goldie” The film, like its heroine, is too stubbornly upbeat to get trapped in the doldrums or dip into poverty porn, and the residual fun of the playful first act (which is highlighted by a great bit where Goldie plays a game of whack-a-mole with a group of a rent-a-cops at a department store) sustains a measure of positive energy deep into the second. But despair is never far, and the sun is still high when Goldie snaps at her sisters that “Nobody loves us, because that’s how it is.” She drags Sherrie and Supreme to an old teacher’s house, and later to an errant member of their family, looking for any solution that isn’t overseen by the government. But nothing sticks, and the clock is ticking.

The more urgent things get for Goldie, the more conventional the film becomes; as her situation grows messier, the plot narrows her toward the inevitable. As much as de Jong makes the case that this story only has one feasible outcome — that what’s best for Goldie might not be what she’s wanted for herself all this time — the transparency of the story’s three-act structure and the way it whittles down to a kind of surrender makes it hard to appreciate if Goldie has actually gotten anything out of this, if she’s learned to better navigate a system that’s built to push her down at every turn, or if she’s going to be any different tomorrow than she was yesterday. There’s a bittersweet and lingering aftertaste to her story, something between resolve and resignation, but flavor only gets you so far in this world.