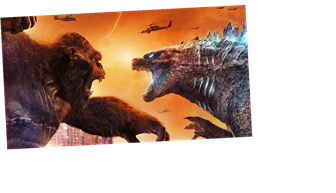 Legendary Entertainment’s MonsterVerse isn’t messing around: Seven years and four films in, the franchise is already delivering the sort of massive battle royale that might take other series decades to create. Adam Wingard’s “Godzilla vs. Kong” takes two of cinema’s most beloved overgrown villains (with hearts of gold, kinda) and pits them against each other in a bombastic franchise entry unafraid to crib liberally from the best bits of each film that came before, while also establishing its own distinct vibe.

There’s already a mishmash appeal to the MonsterVerse, which has hopped and skipped through directors, characters, and time periods to deliver a series that makes sense, sorta, at least if you don’t look at it too hard. Wingard approaches such messy material with a hearty sense of respect and an eye for what really makes this thing work. From Gareth Edwards’ “Godzilla” (the elegant one) to Jordan Vogt-Roberts’ “Kong: Skull Island” (the fun one) and even Michael Dougherty’s “Godzilla: King of the Monsters” (the bad one), “Godzilla vs. Kong” fuses and tweaks the series into an entertaining fourth (and final?) feature.

Picking up after “Godzilla: King of the Monsters,” Wingard’s film finds the remaining “Alpha Titans” — that’s Godzilla and Kong, obviously (also, remember when these things were called MUTOs?) — at loose ends. Godzilla, once considered the savior of humanity, roams the ocean alone; Kong is trapped on Skull Island, stuck under a futuristic bubble meant to keep the raging sea (and potential foes) from destroying what seems to be a fragile existence for the massive ape. Both have their human defenders — Millie Bobby Brown is back as Godzilla superfan Madison Russell, while Kyle Chandler returns briefly as her father; Kong is watched over by “Kong Whisperer” Dr. Ilene Andrews (Rebecca Hall) and her charming deaf daughter Jia (Kaylee Hottle) — and, man, are Godzilla and Kong going to need them.

When Godzilla attacks the Pensacola, Florida outpost of the (nefarious) Apex Corporation, it sets off a chain reaction that ensnares a number of humans and even Kong himself. Despite kicking off with Godzilla and the mystery of why the former good-guy Titan is tearing up corporate strongholds, “Godzilla vs. Kong” is far more invested in Kong’s role in this world-spanning adventure. Skull Island can’t contain him and, based on his disdain for the fancy bubble around him, he’s weeks away from breaking free. When Apex brass (including Demián Bichir and Shun Oguri) comes up with an idea to a) sorta free Kong and b) use him to find an energy source that could battle back Godzilla, even Ilene goes for it. 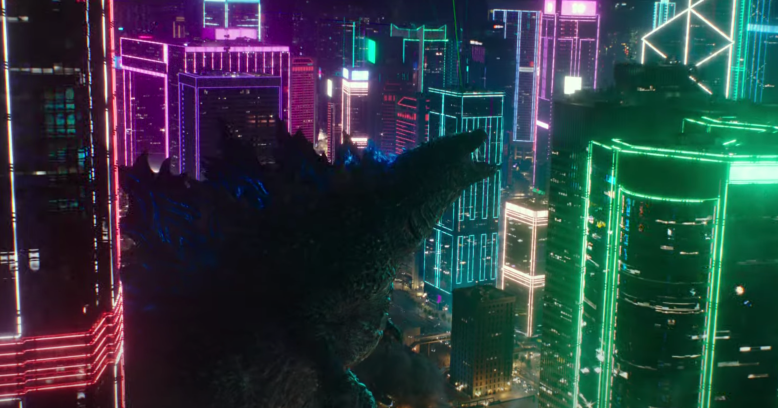 She’s joined by Dr. Nathan Lind (a low-key Alexander Skarsgård), who believes in the “Hollow Earth theory” (i.e., all Titans were originally the inhabitants of the literal center of the Earth), young Jia (the sole surviving member of Skull Island’s Iwi tribe, who has a deep bond with Kong), and an oddly pissed-off Maia Simmons (Eiza González, as Bichir’s daughter). A few convoluted twists and turns aside, the venture at the heart of the film is relatively simple: Apex will use Kong as their guide into Hollow Earth. There, they will find an energy source that will allow Apex and Kong to take out Godzilla and return Earth to the humans.

While “Godzilla: King of the Monsters” delivered plenty of inter-Titan battles, most of them were almost impossible to see (and sopping wet to boot). Wingard literally stages his first Titan face-off in the middle of the sea, but he also assembles a far more coherent assortment of battles for his baddies to partake in. He also doesn’t tease them out too long either: Within the first 40 minutes of “Godzilla vs. Kong,” the duo are battling it out. The film’s final act is almost entirely devoted to fighting, which includes a super-powered foe for both of them. (Godzilla fans can likely guess where this is going and they won’t be disappointed.)

Deep knowledge of the previous films is not necessary to enjoy “Godzilla vs. Kong,” since some confusion is inevitable; even film fans who know the wild history of secret government agency Monarch might find themselves at a loss. Still, the build-up to this showdown is certainly more pleasurable if you’ve watched three films’ worth of character evolution. We’re talking about Titan character evolution, the one element nailed by each film in the franchise. All MonsterVerse movies have been forced to thread a strange needle: How much do audiences want to see classic monsters bonding with regular humans? Moreover, how much does the audience want to see of said humans?

Wingard’s film does well with that ask, particularly when it comes to building Kong’s coterie, including adorable Jia (whose sign-language skills come in handy), staid Ilene, and even the cagey Nathan. Godzilla’s team isn’t as fleshed out, but franchise fans already know Madison and they’ll likely enjoy her comedic-leaning compatriots, including Brian Tyree Henry as a podcaster who infiltrated Apex and Julian Dennison as her dorky best pal.

In the end, though, it’s all about the battles, and Wingard’s film offers some of the franchise’s best. That ocean-set face-off is a master class in coherent CGI extravaganzas that a) take place at dusk and b) often underwater. The action-packed final act is crammed with plenty of fan catnip — what is a Godzilla film without a nighttime battle set in a neon-colored city? — that maintains momentum and furthers the story with every big-pawed swipe. The tantalizing final frames hint at more to come, but “Godzilla vs. Kong” does something rare: It offers a satisfying story that can stand alone, even when its monstrous heroes demand more exploration.

A Warner Bros. release, “Godzilla vs. Kong” will be available in select theaters and streaming on HBO Max on Wednesday, March 31, 2021.

As new movies open in theaters during the COVID-19 pandemic, IndieWire will continue to review them whenever possible. We encourage readers to follow the safety precautions provided by CDC and health authorities. Additionally, our coverage will provide alternative viewing options whenever they are available.