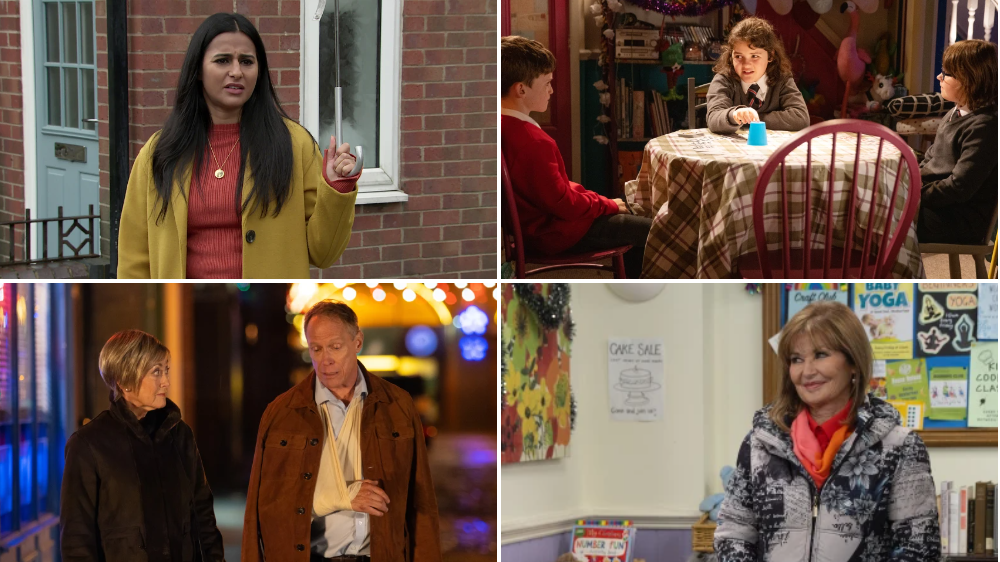 Things are sinister in next week’s Coronation Street as Maria Connor’s (Samia Longchambon) determination to stand up to the racist extremism group leads to a dark threat she can’t ignore.

Meanwhile, Hope Stape (Isabella Flanagan) remains obsessed with serial killer dad John, and things get very unsettling when she holds a séance to try and reach him.

Things are also looking scary for Elaine Jones (Paula Wilcox) when she grows closer to one of Weatherfield’s other serial killers Stephen Reid (Todd Boyce).

Is she heading into serious danger?

Here, we reveal what happens when in next week’s Corrie episode guide.

Tim’s intrigued to watch Stephen and Elaine enter the café. As Elaine reassures Tim that Stephen is nothing like Geoff and is as honest as the day is long, Stephen retrieves his phone. Lying to Audrey and Gail, he makes out he had one too many, fell on his arm and crashed at a friend’s for the night.

Having googled Six Fellas, Gail confronts Stephen about the call from his boss. Can he lie his way out of this one? Tim quizzes Stephen about his intentions towards Elaine, explaining what a terrible time she had with Geoff and how he used to control her.

Meanwhile Sarah’s gutted after her meeting with a potential investor, explaining she messed things up. Having told them how great her proposal is, Gail and Audrey put pressure on Stephen to invest the £10k Sarah needs.

On the spot once more what will Stephen say?

After discovering that nearly all the signatures on the petition were from fake accounts, Maria addresses the Christmas market committee, sharing her plan to rename it a Winter Market and support the refugee centre.

With Steve and Tim still at each other’s throats, Eileen’s at her wits end.

Steering them into the solicitors’ office she instructs Adam to mediate and sort this out once and for all.

Hope returns to school following her suspension, but it’s awkward when the school counsellor quizzes Fiz and Tyrone about their family background.

Deciding it’s time he put a ring on it, Tyrone gets down on one knee and proposes.

As Fiz and Tyrone celebrate their engagement, they’re interrupted by the arrival of the journalist who wrote the John Stape book. Apologising, he hands Fiz a bag and explains it contains all his research into John Stape.

He wants her to have it so that it never falls into the wrong hands. At Dylan’s suggestion, Sean invites Laurence to join them for Christmas at No.11.

Todd paints on a smile, but George clocks his discomfort. Will George realise there’s more going on here?

Alya confronts Griff over his racist comments and threatens to call his employer. Griff warns her that she’ll regret it if she does. Fiz asks Chesney to hide the bag of John Stape things at their house, Gemma stuffs the bag in a cupboard.

Hope suggests to Joseph and Sam they hold a séance to contact her Dad. As the séance takes place Joseph reaches into a cupboard for some biscuits and the jiffy bag falls out.

As the contents of the bag spill out, Hope, Joseph and Sam stare at the photos of John Stape, completely freaked out.

Stephen plays a cruel trick on Elaine, sending an abusive text to his own phone but making it look like it came from Gabrielle. When Elaine suggests that Gabrielle is gaslighting him, Stephen makes out it’s only what he deserves. Elaine tells Stephen that she too was in an abusive relationship and she wants to help him.

Sally calls a truce, promising Tim she’ll never mention his friendship with Aggie again if he promises to forget about his jacket.

Griff makes out he was attacked by four muslim lads. On Griff’s instruction, Max uploads a video of Griff’s injuries together with a racist commentary.

Fiz and Tyrone present Hope with a new laptop for her birthday but Hope has other things on her mind and asks about an old cassette player.

Discovering one in her pass the parcel at her party, Hope rushes home where she listens to the tape of John Stape.

Meanwhile when Fiz admits she dreads all the planning for their wedding and wishes they could just skip straight to the day, Tyrone secretly forms a plan.He confides in Chesney that he’s moved their wedding to Christmas Day as a surprise for Fiz.

When Amy finds morning sickness pills in the bin, Summer’s forced to admit that she lost her baby over a week ago.

When Adam offers to sue Six Fellas for the injuries he sustained, a despairing Stephen is forced to go along with it.

Meanwhile Sarah reveals that she and Michael have everything in place and as soon as they receive his £10k, the business will be up and running.

Mary suffers a panic attack at rehearsal but after some coaching from Martha she gives a great performance.

When Martha invites them all to join her at a play that evening, Ken makes out Wendy’s too busy but he’d be happy to go. Brian’s unsettled by their obvious chemistry.