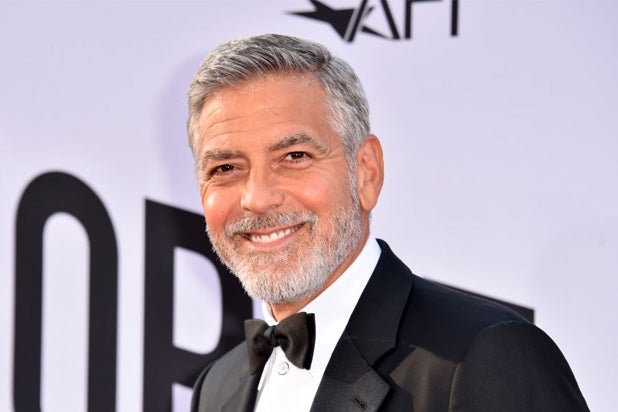 Could George Clooney be more awesome? While some celebrities spend thousands of bucks every year on hairstyling, the silver fox instead shells out $1 million gifts to his pals but cuts his own hair with the use of the ’80s infomercial gadget, The Flowbee.

As political commentator Max Kennerly put it, “For looking that good with nothing more than a friggin’ ancient Flowbee, God–and I cannot stress this enough–damn him.”

Clooney made the confession during an interview with Tracy Smith on CBS’ “Sunday Morning,” when the conversation turned to the actor’s impeccable hair despite not being able to get a haircut for months due to the pandemic. He revealed that he’s been cutting his hair himself for about 25 years, and that he’s done so with the help of a Flowbee, a vacuum attachment created in the ’80s designed for DIY haircuts.

“My hair’s really like straw and so it’s easy to cut. You can’t really make too many mistakes,” Clooney said. “So years ago…I bought a Flowbee.”

Smith couldn’t believe it. “Stop it!” she exclaimed. “You don’t use it!”

Clooney nodded with a grin. “My haircuts literally take two minutes,” he quipped, even indicating that he used a Flowbee for the haircut he was sporting during the interview.

Not everyone believes Clooney. “He’s a huge jokester. I think he’s pulling her leg,” tweeted CBS Philadelphia anchor Trang Do. “An early Christmas gift for the makers of Flowbee.”

But whether it’s a confession or a joke, Clooney’s interview brought out loads of Twitter stories from Flowbee users. Sanjay Shah, producer of the animated series “Central Park” and former writer/producer for “King of the Hill” and “Fresh Off The Boat,” said he’s used a Flowbee for years and even showed off a picture of his own.

“I remember seeing the Flowbee informercial as a kid and thinking ‘why is everyone so calm? The future has arrived!’” he tweeted. “I’ve been cutting my hair with one for a decade. I love it. I’m not surprised Clooney’s a Flowbro.”

Others seethed with jealousy at Clooney for making looking good look so easy.

And others congratulated Flowbee for getting the best free advertising ever. “Flowbee is going to have enough money to buy Amazon within 24 hours,” joked Daily Beast writer Thor Benson.

In a GQ interview, the Oscar-winner said that in 2013 he found a good way to thank his 14 closest friends for their support through the years: by giving them $1 million each.

“I’ve slept on their couches when I was broke. They loaned me money when I was broke. They helped me when I needed help over the years. And I’ve helped them over the years,” Clooney said. “We’re all good friends. And I thought, you know, without them I don’t have any of this. And we’re all really close, and I just thought basically if I get hit by a bus, they’re all in the will.”

Clooney appeared on CBS’s “Sunday Morning” to promote his upcoming movie “The Midnight Sky,” which he directed, co-produced and stars in as an Arctic scientist trying to stop a team of astronauts, led by Felicity Jones and David Oyelowo, from returning to Earth and facing an unknown apocalyptic event. The film will hit theaters Dec. 23.