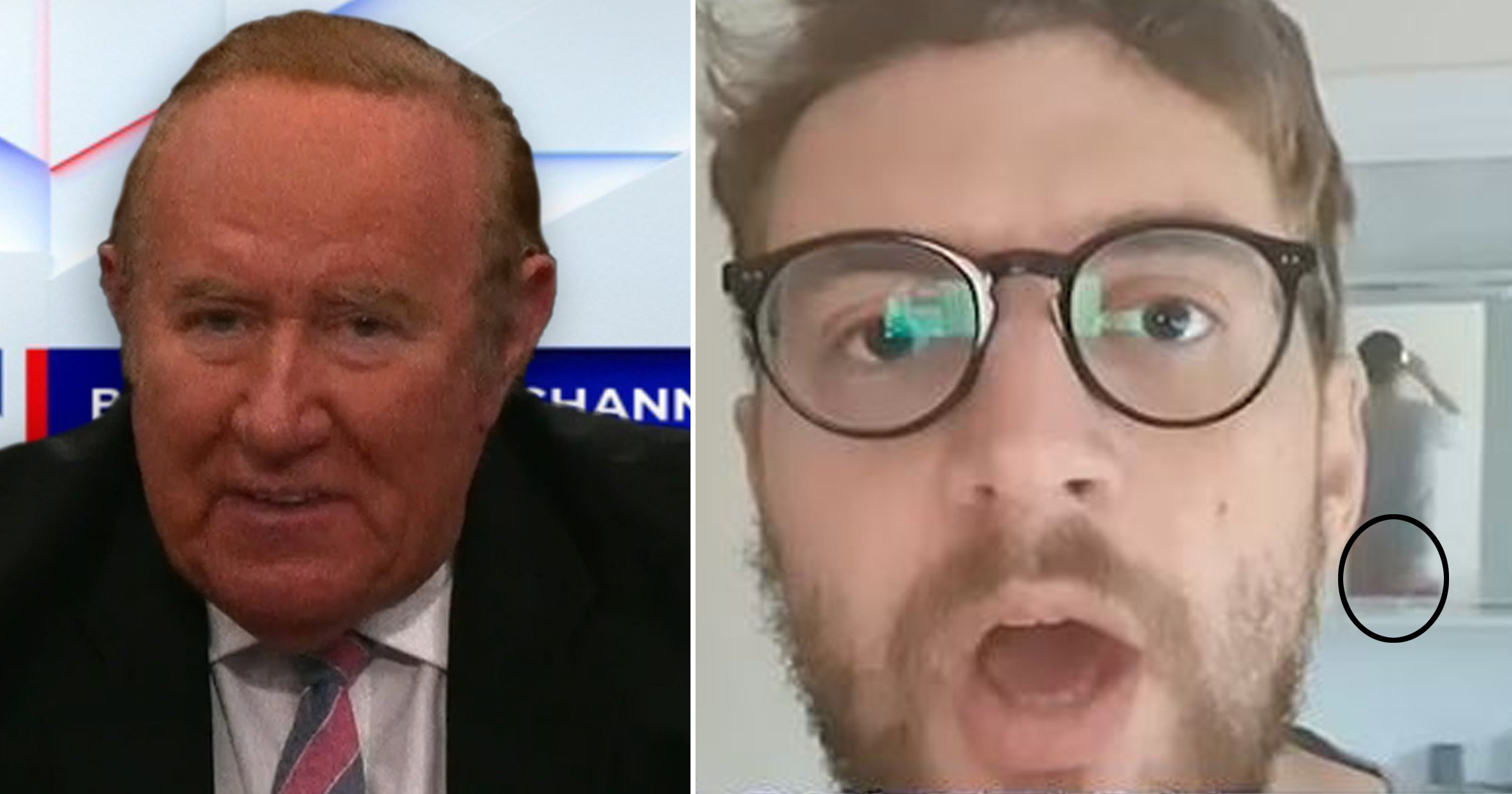 GB News officially launched on Sunday, June 13 – the first new news channel to premiere in the UK in 30 years – but their first few days have already been fraught with issues during their live broadcasts.

The channel, who Andrew Neil, 72, is chairman and a presenter of, promised to ‘give a voice to those who feel sidelined or silenced’ and to ‘expose cancel culture for the threat to free speech and democracy that it is’.

However, it was already hit with technical difficulties right from Andrew’s opening interview – and there were further production issues to come.

From prank callers using explicit fake names, to actual names being misspelled on screen as well as a man with his bum out on screen, it’s safe to say GB News’s first week on air has been a memorable one.

Here are all the unforgettable fails as they happened.

Andrew’s first interview on the channel was with archaeologist Neil Oliver, but despite making an impassioned point during their conversation, viewers at home could not hear what Neil was saying.

As well as issues with the sound on the guest’s mic, viewers also commented that they could hear whispers from off-stage, with Twitter being flooded with comments about the technical issues.

Viewers began noticing misspellings on screen from the second day after GB News launched, with an image of Boris Johnson delivering a speech being broadcast with the words ‘Fereedom Day’.

The problems were set to continue as viewers continually spotted names of guests and places being spelled wrong, including Laurence Fox being dubbed ‘Lawrence’.

The fails are coming in so thick and fast that viewers create a dedicated Twitter feed to chart them all – @GBNewsFails – which has already racked up over 26,000 followers in just three days.

Some of the brands spoke out on Twitter to claim the adverts were being used on the channel without their consent and suspending them immediately.

‘You’re still doing it, and I’m watching them and it doesn’t help anybody.’ 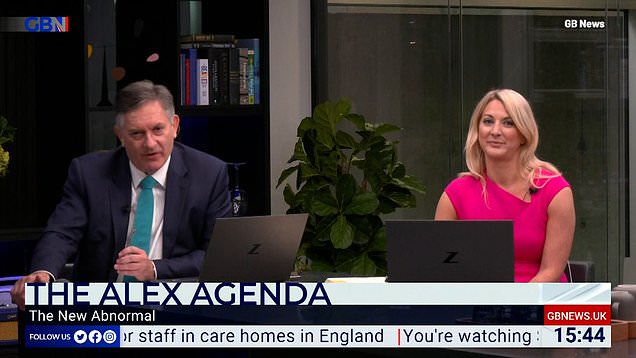 ‘To the person who has just messaged, grow up,’ Simon suggested. ‘We’re a new company, we’re a new broadcaster. There are systems that we’re putting in place that would stop idiots like you getting through.

‘They’re getting through at the moment but please? We’ve got other things to worry about.’

Despite their pleas, more ended up slipping through the net, including ‘Cleo Torez’ who got a shoutout for her wedding. 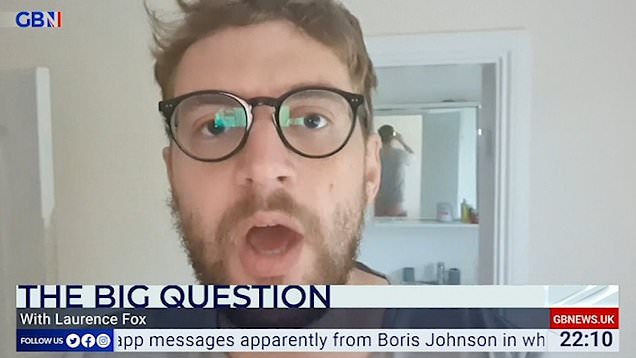 An exasperated cleaner is seen in the back of a shot

While GB News – like many news broadcasters – wanted to show the bustling newsroom behind a presenter, they managed to catch a cleaner looking frustrated instead.

The woman and another colleague are seen scrubbing a table with Dettol wipes (there is a pandemic going on after all) but it is the pair’s conversation that distracted viewers.

The cleaner is seen gesticulating wildly with her arms, apparently having an impassioned chat with her friend and gesturing across the studio in the background.

From labelling Baroness Claire Fox as ‘Darren Grimes’ to calling a young man Dame Rachel De Souza, the ticker appeared to continually be out of sync with the guest that appeared on screen.

From using audio captured on an iPhone to conducting an interview with a miniscule handheld mic, viewers were quick to comment on the lack of appropriate equipment field reporters seemed to be using during the broadcast.

Paired with the ongoing sound issues the channel has suffered from day one, many suggested an upgrade of the equipment may be overdue.

Thank you to Katie who sent in this wonderful capture of either a tiny microphone, or some terribly swollen hands. Stay safe! #GBNews pic.twitter.com/LOfkdHw6tB

Have you lost a phone? LOLLE! just being silly, itâs my OB microphone. #GBNews pic.twitter.com/3fr3Ep5awH

Drilling noises were caught on a live broadcast

Every office or studio needs the occasional bit of maintenance every now and again, but most schedule their works for out of hours.

Not GB News, however, which let contractors get to work drilling in the same area their live broadcast was coming from – meaning the construction noises were of course picked up by the microphones.