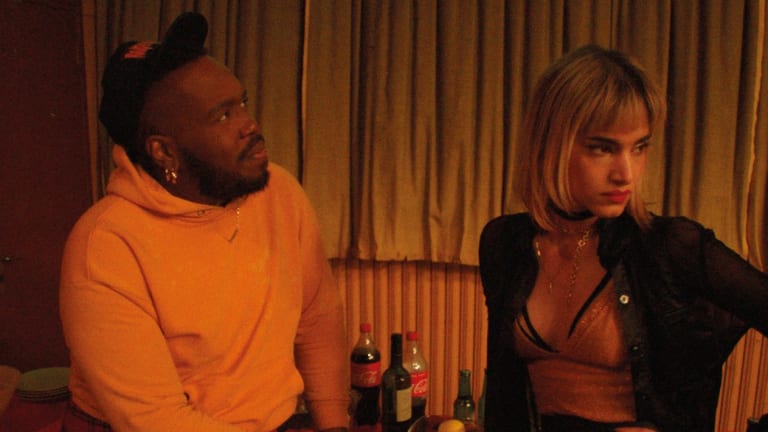 Climax is certainly being touted as "the most accessible" of his films – although that's no great claim. Irreversible (2002), the best known of them, has long been tagged unwatchable by those appalled by Noe's taste for violence. Especially notorious is a relentlessly protracted scene showing Monica Bellucci being raped and beaten senseless. And the others don't exactly exhibit a positive metaphysical view. He is prompted to put both his dreams and nightmares on screen, he says, because joy and ecstasy – whether constructive or destructive – "act as an antidote to the void". In other words, distraction is all.

Climax does have quite a few bitterly comic moments and it's being called a musical. Well, a musical horror film. Noe found most of his cast – selected for their agility on the dance floor – on YouTube dance videos and vogueing balls in Paris. The one familiar name is Sofia Boutella, who appeared with Charlize Theron in Atomic Blonde. She plays a choreographer in a scenario set in a disused school on the outskirts of Paris, where a group of dancers have been brought together for concentrated rehearsals of a show that is to tour the United States.

We're introduced to them in a series of video audition interviews in which they explain what dance means to them and how far they would go to further their careers. Sharp-eyed viewers will find no comfort in the sight of a copy of Pasolini's Salo nestled among the titles on the shelf next to the television set.

Noe's sketchy scenario was inspired by a 1996 news story that provoked his fascination with the chaos and anarchy that can result when a group gives in to mob rule, especially when it's enhanced by drugs or alcohol. In this case, things start to go awry when the dancers learn the hard way that the sangria they've been served has been spiked with a hallucinogen.

The scenes were shot over two weeks in chronological order with Noe encouraging improvisation in both the dances and the dialogue and judging from the result, his actors responded with gusto, especially when splitting into groups to discuss the sexual flaws and attributes of the rest. No concessions to the #MeToo movement here.

And the tension does build. Noe is an assured technician in full command of all the tricks in cinema's armoury and he's no fan of restraint. The opening scene, a drone shot hovering above a snowy landscape, is a knockout and his hand-held camera is almost as acrobatic as the dancers themselves, going so far as to turn the image upside down in a couple of scenes.

He knows how to use the claustrophobic confines of the school's corridors and backrooms, too, and as well as being exhilarating, the dance scenes achieve all that they're meant to in revealing character and personality. With each revelation comes an increasing sense of foreboding once the spiked sangria goes to work. Some of the dancers are so far gone that they have ceased to care about anything. Others are so furious that they're compelled to blame somebody and a witch hunt begins.

We're told little about the dancers' backgrounds apart from the incidental bits or information we pick up from the audition scenes. You learn the rest from watching their reactions. Presiding over them is the large, avuncular figure of the French-African performer Kiddy Smile as Daddy, the DJ, along with Boutella, the only one to maintain some contact with sanity.

But Noe isn't interested in sanity. Consumed by the urge to shock, he lays on so much gratuitous nonsense in his lead-up to the hyperkinetic climax that the actors themselves seem unconvinced by what they're called upon to do and the whole thing collapses into absurdity and tedium. Technique isn't everything.