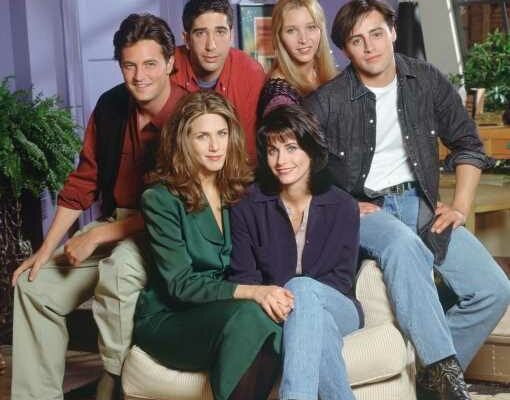 Friends: The Reunion aired on HBO Max on May 27 to audiences who waited 17 years for new Friends content. Viewers were overjoyed to see the cast reunited and learn behind-the-scenes tidbits about the beloved NBC sitcom. But the director Ben Winston revealed what didn’t make it into the special — that the Friends theme song was almost something entirely different.

The NBC sitcom’s opening credits were to “I’ll Be There For You” by The Rembrandts. The title sequence showed the Friends‘ Central Perk orange couch illuminated by city lights and a fountain similar to the one at Washington Square Park in New York City.

The actors sat on the couch in black-and-white outfits, held colored umbrellas, and danced around the fountain.

Winston, who is an executive producer on The Late Late Show with James Corden, spoke with The Hollywood Reporter about how Friends: The Reunion got made. He also spilled on what didn’t make the cut, which was a big reveal about the Friends theme song. “I’ll Be There For You” was almost not the opening credits’ title track.

“An NBC executive saw the show and said the first 10 minutes was boring,” Winston explained. “It was just six people sitting around in a café talking. ‘This isn’t good enough. Unless you change it, you’re not going to make air.’”

Winston continued: “So, they decided to do like a fast, funky, opening titles to R.E.M.’s ‘Shiny Happy People.’ And they cut the highlights of them doing silly faces and dancing around and gave it back to that network executive. The only thing that they changed was a title sequence.”

“They wouldn’t have ever gone to air with R.E.M.,” Winston claimed. “It was just for the purposes of showing the network executives. I have little things like that I found out but I couldn’t put in. Maybe I’ll speak to HBO Max and see if we can release some of those little stories.”

Ben Winston explained why The Rembrandts and Marcel weren’t part of ‘Friends: The Reunion’ episode

Many people on social media were outspoken about some missing cameos from Friends: The Reunion that they wanted. Fans wanted to see Paul Rudd and Cole Sprouse, who were both a huge part of the original series. But Winston also weighed in on why two others were missing from the episode: The Rembrandts and Marcel (the monkey).

As for The Rembrandts, Winston said: “They’re amazing but I never wanted that. That wouldn’t have been the tone of the show that we were trying to make.”

For Marcel, the director joked that they could “either book Marcel or David Schwimmer.”

“I don’t think I could have had both, it was one or the other,” he replied.