There are no aliens, giant space lasers, or dogfighting starships on “For All Mankind” but in some ways that makes the show’s job harder. The alternate universe Earth in which the Soviets won the space race for the Moon but the ERA passed and Jodi Balfour is now President prides itself on a restrained visual style in which the smallest of touches – the reflection on an astronaut’s helmet visor or the hiss of an airlock opening – can convey mountains of meaning. The series’ visual effects dance backwards, sometimes in heels, to create a sense of verisimilitude as in Season 3 the USA, the USSR, and a private space company (Team Capitalism?) raced to see who would land first on Mars. Now that boots are on the ground, all three entities have to live there, which means the show had to create a version of Mars with both enough realism and dramatic danger to sustain the series for the rest of the season.

The quest to build Mars started, though, with Google Earth. “We’re really living in such an amazing time with the information coming from Mars with the recent rovers in the last decade and a half, two decades,” VFX supervisor Jay Redd told IndieWire. “We identified [possible locations] through some real data that we got from maps and even using Google Earth, crazy enough, being able to kind of go in and fly around.” Redd’s flights over the digitized maps of the actual planet Mars led him and the show’s creative team to identify the key locations in the Valles Marinaris that would act as the US/Soviet and Helios bases and the geographical features the astronauts would explore.

But from there, Redd and his team added artistry and the kind of subtle visual characterization. “We really talked a lot about our shape language,” Redd said, adding that the show deliberately chose sharp shapes and canyon walls for where the privately-funded Helios lands as opposed to rolling hills and a more Wild West, plains-and-tumbleweeds feeling for where NASA touches down. “Creating that feel of a neighborhood or a place of settling was really important. So while Mars shares a lot of the same color scheme, the shapes themselves are very different,” Redd said. The team found locations in Southern Utah around Moab and The Arches national parks which could act as the related-but-distinct templates for each section of the show’s Martian neighborhood and used drones to LIDAR scan each area.

The differentiation between NASA and Helios, the private space company, goes further in the design of their respective bases and ships. The result was something director Andrew Stanton was excited to explore in his episodes “Seven Minutes of Terror” and “New Eden”. “There’s something familiar with NASA and what we’ve established with its progression on the moon in [the NASA-funded space station] Jamestown and just that sort of NASA feel where it’s just essential. It’s very utilitarian,” Stanton said. “And so just by having things with angles and different tones of color and the vector graphics that were on the screens [in the Helios base], it really leaned a little bit into [the popular sci-fi look] in the seventies, into the eighties. It’s almost like somebody my age, ie. Elon Musk, got the same influences but had the money [to build it].”

In terms of building out Martian environments, Redd worked to make sure that the Martian sequences would be able to be shot with an awareness of what the effects would ultimately look like. “[The drone scans] came back with incredible data, incredible textures. And then [we worked] with a company called The Third Floor, which does Previs, and we talked to them kind of early on. We wanted to be able to build some low resolution versions of these environments so that I can take them onto set, or I can sit in a production meeting, I can work with the directors and show them where I think we should put the camera or they can say, ‘Ooh, can we be on top of the mountain?’” Redd said. “So we were actually able to kind of in real time navigate and find different shots while we were plotting.”

Plotting was important to Stanton as well, who created animation-esque storyboards in order to map out the more complex sequences, like NASA’s final descent onto Mars. “They’re not as pretty as what normally storyboard people do, but they’re not as ugly as somebody who can’t draw,” Stanton said. “Working from the world of computer graphics, where everything is made up and there’s nothing real, I know the sooner you can think of [a visual effect sequence] as the finished movie or the finished scene, the sooner everybody gets smarter because they don’t get caught up in all the little rabbit holes… everybody understands that maybe we’re only giving two seconds of love here and all the extra love to this one moment here, because they understand it holistically, like a good joke.” 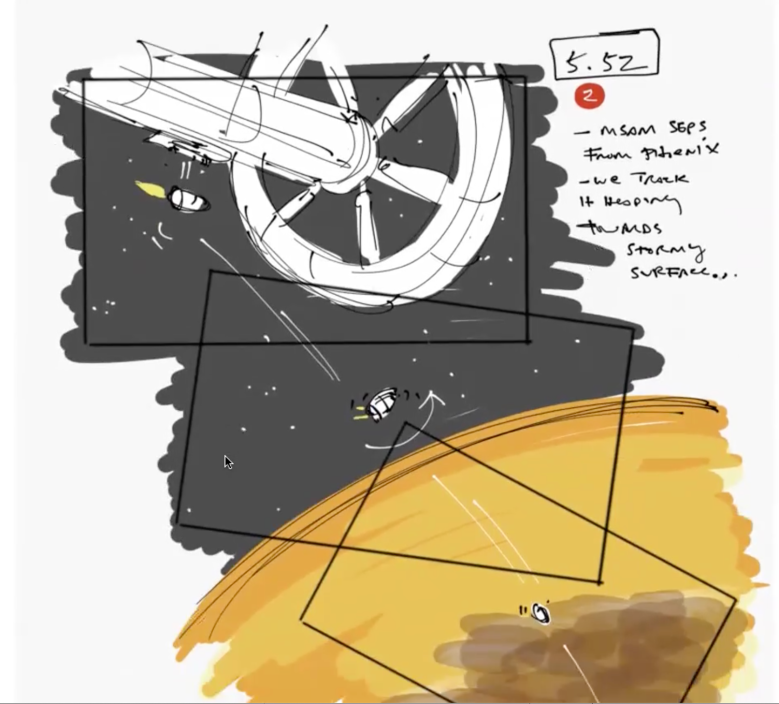 Storboard from Season 3, Episode 5 of “For All Mankind”

There’s moments of humor built into the landing sequences even amid the incredible tension the show mines from the descent into the turbulent Martian atmosphere. For Stanton, stressing what can’t be seen, the moments of lost contact or visibility, are just as important as getting the visuals right. “This kind of show, it’s like: this is what it would be really like to probably experience [space] and deal with it and all the practical limitations. And some of that is I don’t get to see what’s going on outside. It’s always about… the claustrophobic limited view of what it’s like to have to be dealing with it like an astronaut?” Stanton said.

Redd said of Stanton, best known directing “WALL-E” and “Finding Dory” for Pixar, “He’s coming from animation where you’re making every decision. It’s a different way to think, but you can take a lot of that into the live action world. You think about how you’re gonna edit something. You think kind of editorially as you go, and this is what every director should hopefully be able to do, which is like, ‘how am I gonna use this shot?’”

The restrained intentionality “For All Mankind” employs as the cornerstone of its visual style helped guide the show’s creative team to balance strict scientific verisimilitude with a heightened sense of urgency and danger. “A maneuver landing on Mars [takes] 30 minutes. It’s not exciting for TV, so we have to constantly break rules,” Redd said. “But we didn’t want Mars to feel like a sci-fi [setting], because it’s easy to just go, ‘Oh, Mars is orange.’ But it’s not actually. It’s brown and green and gray and yellow and black and blue… I can go to YouTube right now and see that [the real Mars] doesn’t look like that. So we have to balance [realism and drama].”

While the balance sometimes tips towards drama, an obligation to try and visually honor at least of sense realism helped guide Stanton in creating dynamic sequences on the surface of Mars as well. For the Thanksgiving Dinner sequence in Episode 6, Stanton only had a day to shoot a big party sequence in the narrow confines of the NASA base’s bunk quarters. “So what I basically said is, ‘Guys, we’re gonna do the impossible. We’re gonna actually have this dinner. You’re gonna actually just do what you would normally do. And all I ask you to do is that if you can’t see the camera, the camera can’t see you,’” Stanton said of his decision to shoot the sequence all the way through each take, like a play.

Shooting the scene all the way through about five different ways, Stanton said, was the only way to be able to get all the different lines of action and maintain that key claustrophobic, limited view of the astronauts experiencing the treat of raised lays chips, packaged sandwiches, and strong vodka in space. “It has a real wonderful mess to it,” Stanton said. “And I just kind of knew that like, we’re gonna be so inside all [the scene] that just to do something as simple as dollying back [in the end shot] from that tube is just gonna feel special because we’ve been here with them for the whole time.”

Redd also appreciates the special moments when the balance shifts, and “For All Mankind” can briefly open up from its normally restrained view, even if creating that view is the bulk of the visual effects team’s challenge. “To reach [the right] level of fidelity, just for people not to notice, takes an enormous [effort]. The best compliment we can get is like, ‘What visual effects?’” Redd said. “It’s an enormous amount of work and money to just get that working so people don’t think about it.”