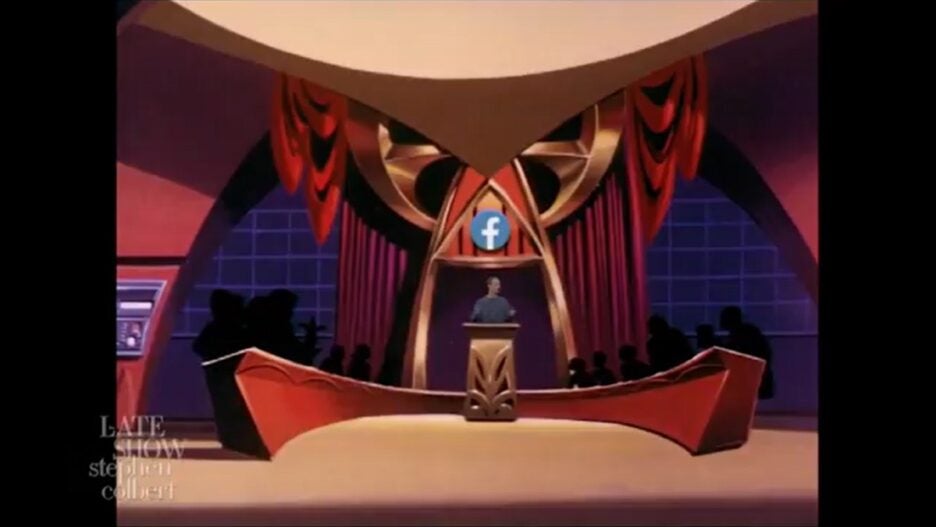 Once again, Stephen Colbert had some fun at Facebook’s expense in his “The Late Show” cold open gag Monday night. And this time, he portrayed Facebook boss Mark Zuckerberg as the new leader of the Legion of Doom.

The gag was inspired by the latest Facebook news that dropped last Friday — the publication of new internal documents showing that Facebook was well aware its algorithm tended to foment and foster right wing extremism at least as far back as 2019. The documents also show that Facebook employees were raising internal alarms about the spread of antidemocratic propaganda and efforts to overturn the results of the 2020 election very early on, but faced difficult getting company leaders to act.

So after the usual few seconds of news clips summarizing the situation, the gag began. Using repurposed footage of the 1970s-80s cartoon series “Super Friends,” it showed Mark Zuckerberg taking over as the new leader of the Legion of Doom.

“So, let’s hear some ideas,” cartoon Zuckerberg says after introducing his new team of DC supervillains.

“How about an app that makes teenage girls feel horrible about themselves,” suggest Scarecrow.

“Have it,” Zuckerberg said. And he was right.

“What if we undermine democracy,” Gorilla Grodd asked.

“Did it,” Zuckerberg replied.

“Wow, I miss Lex Luthor. Where is he anyway?” Cheetah asked.

Then the scene switches to Amazon HQ where Luthor has taken over the company and reveals he’s the reason Amazon uses such wasteful packaging for tiny shipments.

Watch the whole thing below: