Sci-fi drama The Expanse has had a somewhat rocky voyage over its four seasons. After giving us three wonderful seasons on Syfy, fans were shocked to learn the network canceled it.

However, shock turned to a pleasant surprise when the guys at Amazon Prime rode in on a white horse to give the show a fourth season. And it didn’t disappoint.

Warning: Spoilers for The Expanse are ahead.

Season four saw the team of the Rocinante continuing in their efforts to stop the dangerous spread of the dreadful Protomolecule. The season was a bit of a slow-burner, but it blew our minds towards the end. The series ended with a belter of a cliffhanger as Marco Inaros initiated his attack on Earth.

But will there be more?

The good news is that there is a fifth season heading our way at some point in the foreseeable future. Amazon Prime Video announced they’d commissioned a fifth season way in July 2019.

The fourth season arrived in December 2019, so the Amazon executives expected the show to continue being a hit with fans. They were correct too.

Now for the bad news. Amazon has not yet announced a release date for the next season; however, we are in an excellent position to make an educated guess, and it might be sooner than you think.

When is The Expanse season 5 likely to come out?

The filming of most TV shows was put on hiatus due to the social distancing restrictions in place since COVID-19 started its spread around the world. But, thankfully, The Expanse was unaffected as they wrapped filming in February 2020.

Show director Breck Eisner tweeted a video on February 22 and stated they finished filming. He wrote: “That’s a wrap! I’m proud of the work we’ve all done this year.”

There is also great news, as Amazon Prime Video has also renewed The Expanse for Season 6, which will be its final season.

You should expect all of the main cast members to return, and we should see a few additions for the next season. For example, we can expect to see a lot more of Keon Alexander (Marco Inaros), Jasai Chase Owens (Filip Inaros), and Nadine Nicole (Claire Mao), all promoted to regulars for the next season.

Filip is the estranged son of Naomi (Dominique Tripper), and Marco is his father, so expect to see lots of drama afoot with that plotline.

Lily Gao will also return as Nancy Gao; the new UN Secretay-General should be on our screens quite a lot in the new season. But don’t expect her predecessor, Chrisjen Avasarala, played by Shohreh Aghdashloo, to disappear, as it’s thought she’ll maintain a presence.

We can also look forward to seeing more of Thomas Jane as Belter Detective Joe Miller, he was a central character in the first two seasons, but has played more of a guest appearance role in the subsequent seasons. Jane also got to direct an episode this season; look out for his work on Episode 3. 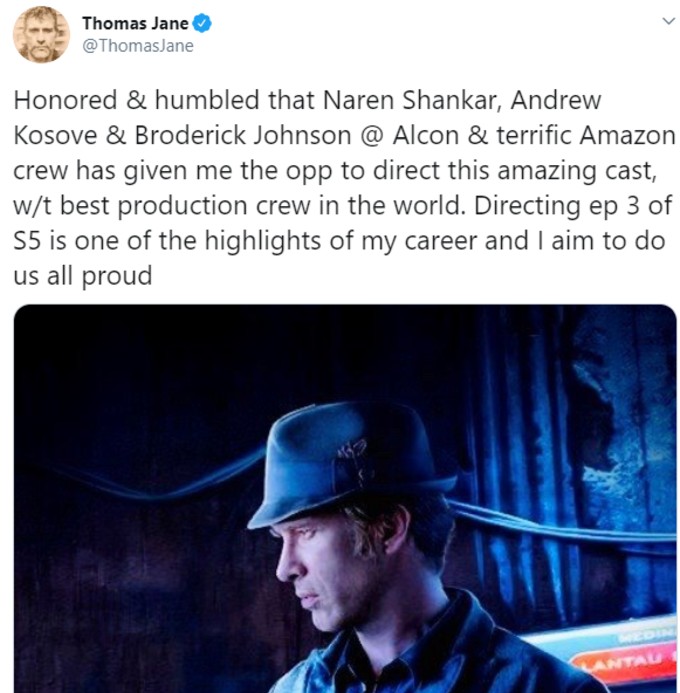 What will The Expanse Season 5 be all about?

The Expanse is based on a series of novels of the same name written by James S. A. Corey, and we can assume that the new series will be, at least, loosely based on his fifth book, Nemesis Games.

We saw a bit of Nemesis Games at the end of season 4 with the rise of Marco Inaros and his attack on Earth.

There will be a kind of interplanetary land grab, and there will also be a collapse of the old power structures. We should see a significant shift in the balance of power, which may mean the poor Belters might get to call the shots for a while.

As usual, the Rocinante crew will be in the midst of it all, no doubt battling inter-planetary subterfuge and conspiracy. Best of luck to them all.

There are some great shows appearing on Amazon Prime Video in the coming months. The second season of the brilliant The Boys is set to drop this September. Expect it to be just as dark, comic, and action-packed as the first series.

In a recent interview, The Expanse showrunner Naren Shankar explained what people can expect from Season 5.

“I’ll give you the theme because that’s probably the easiest way to look at it,” Shankar said. “The theme really is about the sins of the past. To one extent or another, that’s every single storyline.”

Here is the first-look trailer for The Expanse Season 5:

The Expanse Season 5 returned to Amazon Prime Video on Dec. 16. The first two seasons of the series are available to stream right now.