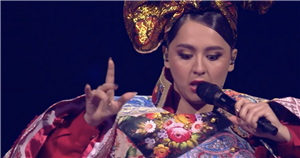 Fans of the Eurovision Song Contest 2021 were left speechless as Russia's act Manizha stripped out of her costume live on stage.

Manizha burst into the contest to sing her track Russian Woman, wearing a huge traditional Russian dress – on wheels.

The huge costume certainly drew plenty of attention from viewers, who flocked to social media to share their thoughts on the bizarre outfit.

"Subtle #Eurovision outfit from Russia!" one commented with a heart-eyed emoji.

Another said: "Now that takes skills – singing in a dress like that!"

While a third posted: "OMG THAT DRESS MOVES WITH WHEELS!"

But jaws dropped even further to the ground as Manizha stripped right out of the huge dress – to reveal a bright orange boiler suit underneath.

The rapper continued to bop around on stage as she finished off her song.

"I've heard of a walk-in wardrobe but that's ridiculous!" one fan joked on social media.

Someone else said: "I think a dozen back-up dancers were trapped inside Russia's big dress."

Meanwhile, BBC's Eurovision host Scott Mills added his own wry commentary, quipping: "I thought it'd be like an actual Russian doll underneath, like the boiler suit would come off and there'd be another one underneath!"

But others pointed out that the dress wasn't actually attempting to replicate a Russian doll – it was actually modelled off a tea warmer dubbed 'baba na chainik'.

"For everyone wondering, Manizha's dress is not referring to matryoshka (Russian doll). It's actually a tea warmer and in Russia it's called baba na chainik. It usually looks like a woman that sits on top of a teapot," one fan explained.

And someone spotted the resemblance already, writing on Twitter: "#Russia brought her favourite tea cosy along. Very stylish!"

But others spotted another uncanny resemblance – to a Dalek, as featured in Doctor Who.

"There was a Dalek from Russia!" someone scribbled on Twitter.

The reception to Manizha's track was overwhelmingly positive, with many members of the audience ranking it in their top three tracks of the night so far.

"Russia's #Manizha delivered the best performance so far tonight and most probably also for the rest of the evening!" someone posted.

Tuesday's was the first of the Eurovision semi-finals for the 2021 event, with 16 acts competing for a place in Saturday's Grand Final.

A further 17 will compete in Thursday's second semi-final – with 10 acts from each proceeding to the big event this weekend.

The United Kingdom is exempt from competing for a place as it is a member of the Big Five along with France, Spain, Italy and Germany.

They are the biggest financial contributors to the European Broadcasting Union (EBU), and thus are all permitted to head straight to the Grand Final each year.