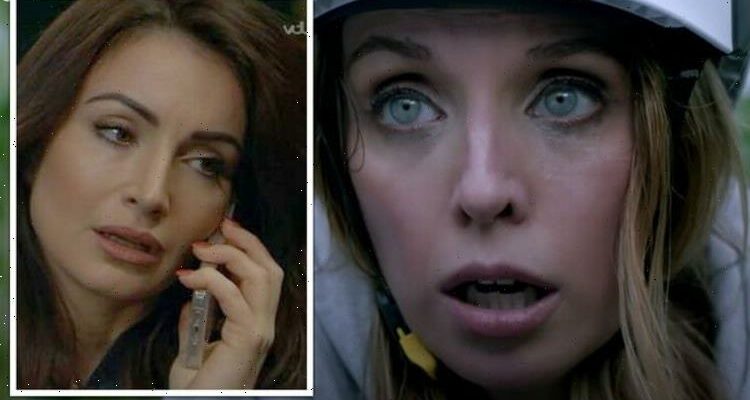 Meena Jutla (played by Paige Sandhu) is currently on trial for murder and while some ITV fans are concerned she will get away with her crimes, others are certain Leyla (Roxy Shahidi) and Andrea Tate (Anna Nightingale) are working together to bring the killed to justice. The Emmerdale criminal has been in court with her sister Manpreet (Rebecca Sarker) and Liam Cavanagh (Jonny McPherson) giving evidence against her. Both were confused as Leyla took off to take a call claiming it was work but viewers think it was Andrea.

Andrea is believed to be dead by the residents of the village after she was attacked in the maize maze in October 2021.

It was claimed she burned in the blaze after being struck over the head by Meena.

But as her dead body was never seen on screen, some viewers of the long-running soap are convinced she is still alive.

Not wanting to put herself or her family in more danger, she could have laid low until it’s time to prove how evil Meena is.

It’s therefore not surprising viewers think the former wedding planner has been working with boss Leyla to assist with proving Meena is guilty.

In Friday’s episode, Leyla was with Manpreet and Liam when she received a mysterious call and told the pair: “I’m so sorry, I’ve got to take this it’s work again.”

As she walked away, she questioned the caller: “Hi, I thought I was supposed to be ringing you?

Leyla abruptly ended the call and didn’t mention it again but the mysterious nature of the call caught the attention of viewers.

Could “work” be code for her former colleague Andrea as the pair both worked at Take a Vow.

Many took to Twitter to share their theory it was Andrea on the other end of the phone.

Ryan Glendenning posted: “Next week looks so good it’s finally Meena’s trial hopefully it’ll be the end of the line for her and she’ll finally go down for her crimes.

“Meena has got away it for long enough. I think Andrea is really Alive and will come back as a shock twist to take the stand #Emmerdale.”

Riley Collins added: “#emmerdale Yes, I know Meena’s trial will be very serious and difficult. BUT I AM LIVING FOR THOSE OUTFITS.

“Also, this whole Meena/prison guard thing won’t go far – somebody is gonna catch them. Also pretty sure Leyla is working for Meena/Andrea.”

Yvonne posted: “Layla would not be having affair I think it is her best mate Andrea under police protection #Emmerdale.”

Sabina theorised: “Anyone have any theories about who Leyla was on the phone to in @emmerdale there’s something telling me Andrea is alive.

Melanie also added: “I wonder… is Leyla taking phone calls from Andrea? We never saw her body and Charles even conveniently remembered she existed today…. #Emmerdale.”

Fans will have to wait and see if Andrea and Leyla are working together but even if they aren’t, Meena’s trial is likely to come to a dramatic end whatever the outcome.