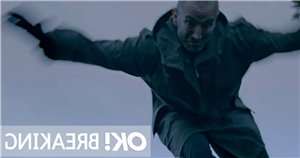 Emmerdale fans were left horrified on Monday as the episode ended with Sam Dingle's lifeless body on a tractor spike after attempting to escape a cow stampede.

During the latest instalment, the village continued to struggle with the terrifying storm and winds, especially over at Moira Dingle's farm.

As the storm started to destroy the farm, Sam and Nate Robinson were left worried about the animals, especially the cows as the pen was rattling loose.

And true to their worries, it wasn't long until the cows were able to escape as they caused a terrifying stampede with Sam and Nate having to sprint for their lives.

Sam was able to jump over the hay bales to escape the cows while Nate was brutally trampled by the cattle.

However, viewers were left horrified as the ITV soap revealed a chilling twist at the end of the episode as it showed Sam's body lifeless on a tractor spike after his jump to escape went wrong.

Viewers were quick to react to the scenes as they questioned whether Sam, who has been on the ITV soap since 1995, was dead or alive.

One person tweeted: "I'm shouting at the TV….. Noooooo not Sam.. #emmerdale."

A different account put: "How have I just watched the last 5 mins of #emmerdale and seen Sam Dingle might be dead nah this has ruined my night."

Another follower wrote: "Oh no! Not Sam Dingle #emmerdale."

While a different viewer added: "OMG, I don’t think anyone saw that coming. I hope to god that Sam survives #emmerdale."

For all the latest cast updates and juicy Emmerdale spoilers, sign up to our daily OK! Newsletter . Emmerdale continues weekdays at 7:30pm on ITV.