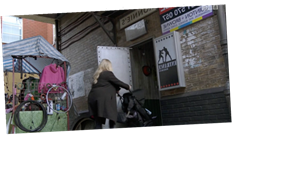 EastEnders fans enjoyed a blast from the past as Albert Square’s boxing club and gym made a reappearance on Monday night’s episode of the soap.

The gym, later dubbed Ronnie’s after it was purchased by Ronnie Mitchell, had been largely forgotten by viewers.

Ronnie continued to run the business as a boxing club but later added a gym to appeal to a wider customer base.

It began its life as the Basher Branning gym when it was owned by Jack Branning and Michael Moon.

Janine Butcher later bought Jack’s share, but was forced to sell the gym when she was locked up.

On Monday night, Sharon Mitchell entered the gym and turned on the lights for the first time in a long time, as she was waiting on a treadmill delivery.

And later, she took Mo Harris and Jean Slater to clean the place out.

"I need it all clean and tidy so I know what I'm dealing with," Sharon said.

Jean asked: "Whatcha gonna do about the smell? It reeks of hairy men and sweaty underpants."

Mo didn't agree, as she laughed: "The smell's the only thing I do like!"

Jean was worried about the effort Sharon was going to have to put into the place, and said: "It's an awfully big job you’ve taken on."

But Sharon is determined to make it work.

Fans took to Twitter to share their surprise, with one commenting: "Ain't that gym a wreck. Weren't Jack Branning runnin' it a while back?"

Another wasn't impressed by Sharon's order, saying: "Sharon ordering in treadmills before she's done a single thing to the place lol."

Someone else wrote: "Ahh I've missed the gym."

And a fourth viewer penned: "They finally remembered they had a gym set hidden somewhere #EastEnders."

Another view was enjoying the blast from the past, commenting: "Omg it's mad seeing the gym again, it's like a bit of nostalgia."

But others weren't convinced it was a good idea to buy the old place and patch it up, with one writing: "Sharon's got buyer's remorse."

Mo encouraged Jean to vent her frustrations using the old boxing equipment, and she soon donned a pair of boxing gloves and began to pound a punching bag.

But that wasn't enough to calm her when she heard the news her daughter Stacey had been sentenced to a year behind bars.

Later in the episode, Jean stole the van that had arrived to drop off the new treadmills and crashed it after it was blocking her path.

Viewers are worried she'll end up jailed and join her daughter Stacey in prison.