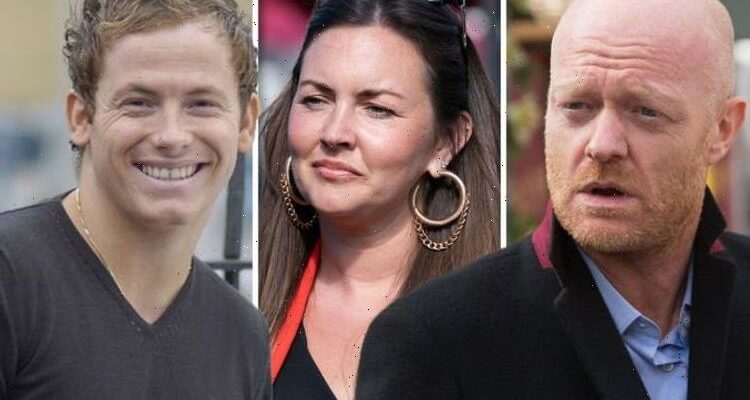 Stacey Slater (played by Lacey Turner) is currently in prison after pleading guilty to assaulting Ruby Allen (Louisa Lytton). EastEnders fans know the stalwart is innocent and the actress recently confirmed she will return to the soap following her maternity leave. Meanwhile, Joe Swash, who starred as Mickey Miller, has spoken out on reprising his role. Could the pair arrive in Walford as a new couple?

Mickey first turned up in Walford in 2003 before leaving in 2008 to join his family in the Cotswolds.

The unlucky-in-love struggled to cement any romantic relationships on the square and decided he needed a fresh start.

During an appearance on GB News, the actor and TV presenter addressed the possibility of returning to the BBC soap.

Great British Breakfast presenter Simon McCoy asked: “I’ve got a question for you because you gave a hint the other day, are you going back to EastEnders?”

“Listen, they’ve not asked me to go back on EastEnders,” Joe replied. “So I’ll have to ask for permission first.”

“As far as I know, no return to EastEnders,” he added.

“Okay, just checking,” Simon quipped and Kirsty added: “Everybody wants you to.”

Despite Joe’s coy response, he recently hinted at a return in an interview with snack company Peperami.

He said: “I would go back to EastEnders as it was unfinished business.

“During my last stint, I caught meningitis, so I had to take a year off work.

“It meant I couldn’t get my character involved as much as I wanted to. If I did go back, I’d want to do it properly.”

Joe took a break in 2005 from the soap and made a brief return in 2011 for Darren Miller (Charlie G. Hawkins) and Jodie Gold’s (Kylie Babbington) wedding.

During his time on the square, Stacey attempted to seduce Mickey and the pair could reignite their passion in upcoming episodes.

When Stacey is released from prison she may want to spend a little time away from the square to recover after being attacked by her inmates.

EastEnders fans know very little about Mickey’s current situation but he and Stacey could bump into each other and decide to return to Walford together.

Elsewhere, Ruby has been struggling to cope with her selfish actions after growing closer to Jean Slater (Gillian Wright).

Jean supported Ruby when she discovered the club owner was undergoing an operation after being diagnosed with endometriosis.

The pair began to develop a blossoming friendship and enjoyed spending time with one another.

However, when Jean received a call from the prison informing her that Stacey had been in a fight, everything changed.

Jean learned she could no longer visit her daughter in prison and hit out at Ruby.

The Slater matriarch warned the club owner she believed her recent kind actions were a result of her feeling guilty for sending Stacey to prison.

Ruby tried to reason with her but was left heartbroken when the mum told her to keep her distance.

Will the club owner finally come clean to Martin Fowler (James Bye) and admit she lied about Stacey assaulting her?

EastEnders continues on BBC One tonight at 9pm.