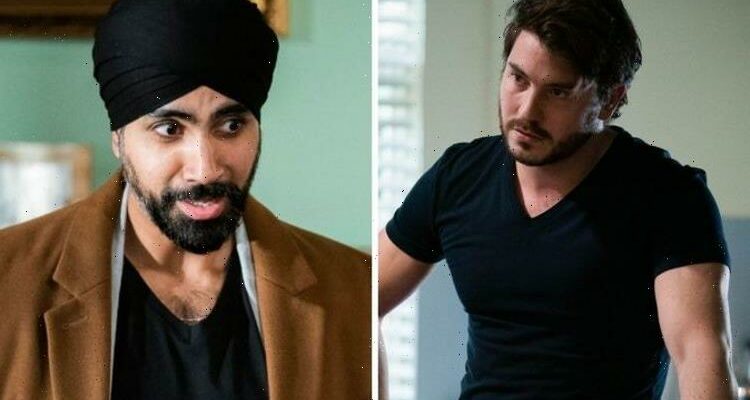 Gray (played by Toby-Alexander Smith) has reverted back to his controlling ways EastEnders viewers were used to see when he was married to Chantelle Atkins (Jessica Plummer) before he killed her over a year ago. Now he’s married to Chelsea (Zaraah Abrahams) he has already begun to alienate her from her family and friends. Kheerat (Jaz Deol) and Whitney (Shona McGarty) are terrified for Chelsea, and on Monday’s episode of the BBC soap, Kheerat popped in to visit her, bringing over some food as an excuse. As Chelsea exclaimed how scared she was, Kheerat hinted to Gray he’d be back with more meals. He might decide to put something in the next dinner and order Chelsea not to eat it. Could this be how Gray meets his end?

Since he murdered Chantelle after abusing her for a long time, Gray has gone on to kill Tina Carter (Luisa Bradshaw-White) and Kush Kazemi (Davood Ghadami).

He killed Tina after she worked out what he did to Chantelle, and pushed Kush in front of a train to stop him from fleeing the Square with Whitney.

After a long period of staying under the radar, viewers are hoping for Gray’s downfall to come soon.

After weeks of discussions, Monday’s instalment of the soap saw Kheerat and Whitney becoming serious about putting a plan into action.

“It’s not up to you whether Chelsea stays in that house or not, it’s up to her,” Whitney fumed at Kheerat after he advised the new mother to stay put for now.

“I just meant that we’ve come this far,” he replied.

Whitney continued: “I’m so sick of men, do you know that? Why is it always ‘we’ and ‘us’ with you lot? You’re not the ones putting yourself in danger.

“Sleeping with one eye open because you know that you’re living with an abuser.”

She added: “Kheerat, look, I know that you want justice for Chantelle, and I do too.

“But, if the only way we can get that is by putting another woman in harm’s way, how are we any better than him?”

“Chelsea’s really, really trying hard to hold things together in that house,” Whitney went on. “Kheerat, she isn’t doing well, she needs out.”

As Kheerat said it wasn’t as easy as that, Whitney claimed she had a plan.

Later, Kheerat showed up with a cooked dinner for the pair.

Out of earshot of Gray, Kheerat explained Chelsea had to leave Gray off Jordan’s birth certificate in order to cut all ties to him.

“I can’t, I need a new photo ID – he’s got my passport,” Chelsea explained.

She added she wouldn’t be able to replace it as Whitney planned as she couldn’t get away from Gray long enough.

Gray appeared to comment: “The food smells amazing, make sure you thank your mum for us.”

“How do you know it wasn’t me?” Kheerate replied, before adding: “You’re right, it was my mum.”

He then said: “I’ll let her know you’ll take anything that goes, yeah?”

Could Kheerat have decided to kill Gray rather than help Chelsea escape?

It’s possible he may bring over more food but subtly tell Chelsea not to eat it.

When Gray eventually does, he could die from being poisoned by the dinner.

Will Chelsea be able to escape from him as he starts to feel the effects of the tainted food?

Fearing there is no other way out for Chelsea and wanting justice for Chantelle’s murder, Kheerat could decide to take the drastic measures.

EastEnders continues on Tuesday at 7.30pm on BBC One.