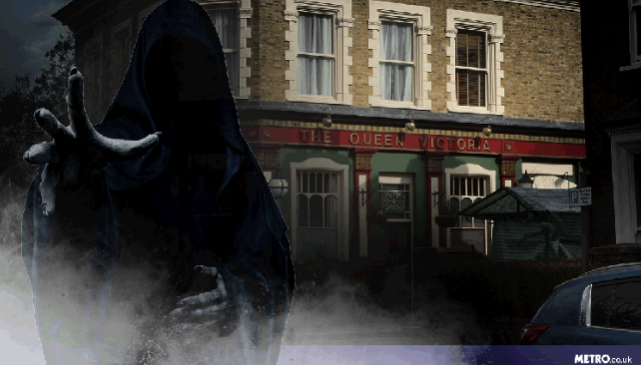 The following article contains spoilers for this week’s EastEnders episodes, which have NOT yet aired on TV, but can now be viewed on BBC iPlayer in the form of a boxset.

Phil Mitchell (Steve McFadden) is declared dead in upcoming scenes, after a showdown in his cell with villainous Craig Erskine (Johnny Mills).

Erskine, as viewers know, promised to end Phil earlier this week. Phil, however, was determined to stay alive, as he set out to secure protection from Ravi Gulati (Aaron Thiara).

But his plan fell through, as Ravi was sent to solitary, meaning that – on the eve of the attack – he was alone in his cell.

DI Keeble (Alison Newman) promised protection if he took the deal that she’d previously offered, but Phil refused, claiming he would never become a ‘grass’.

Sharon Watts (Letitia Dean), meanwhile, was horrified to learn of Phil’s predicament, and instructed him to fight for his life, as she was dragged away by security guards, after professing her undying love for him.

Phil returned to his cell and prepared for his demise, looking at a picture of mum Peggy (Barbara Windsor), asking her to ‘be waiting for him’ when the time comes.

Erskine and his fellow gang members then entered Phil’s cell, and set upon him in harrowing scenes.

Thursday’s (July 7) edition of the BBC One soap, which can now be viewed on iPlayer, sees Sharon receive word from the prison, and is told that someone in Phil’s cell has been murdered.

A body bag is then seen being removed from said cell.

Determined that Phil gets his ‘final’ wish, Sharon ensures Peggy’s launch is a success, but Sam (Kim Medcalf) finds the letters in her colleague’s bag, and she’s utterly devastated – both at the fact that her brother is ‘dead’, as well as at the fact that he failed to write her a letter.

Phil, however, is very much alive, and he leaves everyone stunned as he turns up at the opening of Peggy’s with a big smile on his face!

With Wimbledon disrupting EastEnders’ typical broadcast schedule, the decision was made to allow audiences the opportunity to watch episodes of the BBC One soap online ahead of broadcast.

The soap will continue to drop episodes on iPlayer each and every Monday until mid-August.

These episodes will still air on BBC One later this week. And, whether you’re bingeing or watching on the telly, it’s a week in Walford that’s not to be missed.

This week’s EastEnders is now streaming on BBC iPlayer.