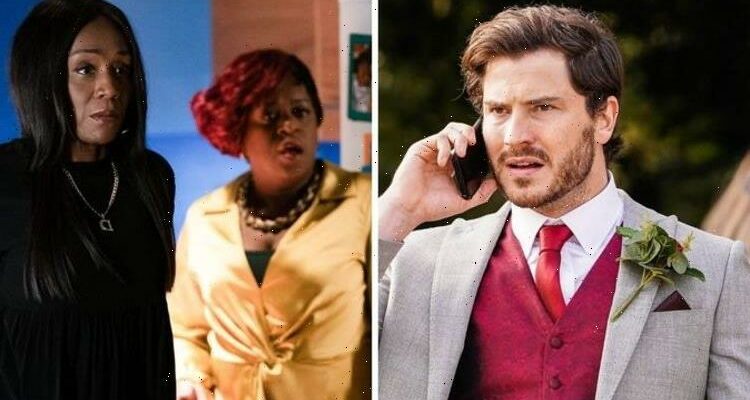 EastEnders: Maisie Smith on her exit and possible return

EastEnders’ Denise Fox (played by Diane Parish), Kim Fox (Tameka Empson) and Chelsea Fox (Zaraah Abrahams) could all be in danger this Christmas by Gray Atkins (Toby-Alexander Smith) as the pressure of his lies builds up. With Chelsea pregnant with his child and Whitney Dean (Shona McGarty) on his case about the murder of his ex-wife Chantelle Atkins (Jessica Plummer), will Christmas end in tears for the Fox’s on the BBC soap?

And it’s safe to say it doesn’t sound good for the Fox family, as she began: “I think it does get to a stage where she [Chelsea] feels a little bit in the middle, and she’s pulled between auntie Kim and mum.

“She does try and think of ways to get them to sort it out because it is getting in the way, but whether or not they figure it out is yet to be seen yet indeed.

“They are quite close when it’s the three of them, and so she does feel in the middle.

“I mean, they’ve had a few rows, and he’s had a few outbursts that she has picked up on and has mentioned it to Whitney.

“She has seen his temper, but I don’t necessarily think she relates that to his everyday personality.

“She just thinks that was in the moment, heated discussions were a bit nasty, but he has apologised, and they’ve moved on,” she explained.

In the past, Denise’s ex-husband Lucas Johnson (Don Gilet) caused terror in her life when he went on a killing spree in 2009 and again in 2016.

After Denise found out about his crimes, he framed her for the murders before faking her suicide and keeping her locked in a basement for months.

She eventually managed to escape and exposed his crimes sending him to prison for what fans expected to be forever.

In explosive scenes coming this Christmas, Whitney is set to intervene at Gray’s wedding to Chelsea and expose the truth about his murders.

Discovering the truth about her fiancé, Chelsea is stunned but will she believe Whitney or go through with the wedding?

Will the wedding become a way for her and her family to escape Gray’s clutches, or will this just push them into danger even more?

Aware that he is scraping by and rushed by Whitney to come clean about his financial status to Chelsea, the ex-lawyer recently suggested that the couple delay this wedding as it could be too expensive.

Furious at his suggestion, she refused to comply and was determined to walk down the aisle during the Christmas season.

However, she soon saw the full wrath of her fiancé when she interfered in his business.

With Gray’s anger likely to come to the forefront and with Abraham’s quotes hinting at an almighty showdown, could the EastEnders villain turn violent against her family?

Desperate for money too, there are plenty of clues to suggest he could take them hostage in return for ransom money.

EastEnders boss Jon Sen has previously teased at the “fascinating” climax to Gray’s killing spree and told The Sun Online: “We’ve obviously got the culmination or we’re building to the kind of culmination of the Gray storyline.

“And that takes its kind of next chapter, I think, obviously, has been a very long story arc, and it’s taken many twists and turns.

“But we are kind of like you know, going back to the grassroots of the story really pivoting it back to, to its origins, and it’s gonna be fascinating turn of events for the Atkins family.”

Will Gray finally meet his downfall this Christmas?

EastEnders airs Monday, Tuesday, Thursday and Friday on BBC One.