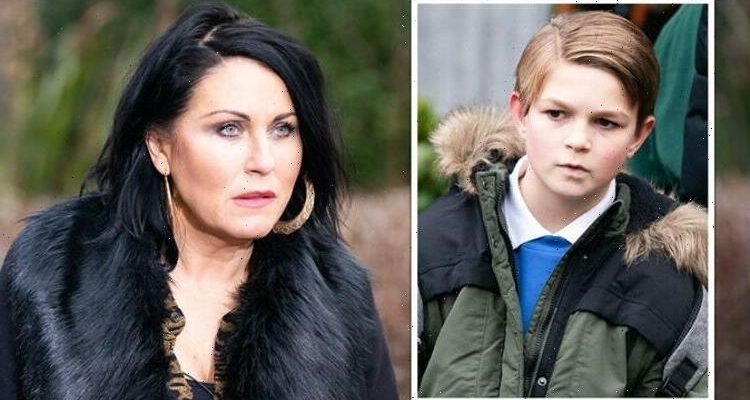 Tommy (played by Sonny Kendall) made the risky decision to bring a knife to school earlier this week to protect himself after being tormented by a group of bullies. Meanwhile, his mother Kat (Jessie Wallace) has been hiding a gun in her house as she anxiously waits for it to be collected. However, if she discovers just how badly her son is being picked on, will she take matters into her own hands by using the deadly weapon?

Kat recently accepted the dangerous package from Phil Mitchell (Steve McFadden) into her house which turned out to be a gun.

She has managed to hide the gun away from her son, and it is set to be collected in due course.

Official BBC soap spoilers have hinted Kat might actually keep the gun when she learns about her son’s bullying ordeal.

In scenes yet to air, Tommy returns home after bunking off school again following another difficult day in the playground.

Expecting to get an earful from his mother when he walks into the house, he is left stunned to find her crying in the kitchen.

Has Kat discovered her son is being tormented by a group of boys at school or has something else left her in tears?

Later on, an anxious Kat learns the lethal weapon will soon be picked up from her house.

She stays inside and is kept on the edge of her seat as the waits for the doorbell to ring.

Upcoming scenes will see Tommy’s week take a dark turn when he watches a video of bully Sid making fun of him.

In the playground, the bullies continue to taunt Tommy, but Isaac Baptiste (Stevie Basaula) notices the commotion and breaks it up.

Isaac later interrupts Kat at her home to tell her about the extent of her son’s bullying issues.

He breaks the heartbreaking news to her while she still has the gun in her house.

Could a protective Kat be able to take action by pointing the gun at the bullies after school?

The mother will have to be careful as scaring the youngsters with a gun could have serious repercussions.

While terrifying the bullies with a gun may haunt them momentarily, they could just continue targeting Tommy the following day.

However, if the bullies goad Kat about her son and try and get a reaction out of her, will she go as far as pulling the trigger on them?

Kat could face life behind bars for murder if she shoots one of the boys, which would leave Tommy devastated.

Alternatively, Tommy might find the gun in his home while Kat is waiting for it to be picked up.

Could he be the one who turns it on his bullies in upcoming dramatic scenes?

EastEnders airs on Mondays, Tuesdays, Wednesdays and Thursdays on BBC One at 7.30pm.