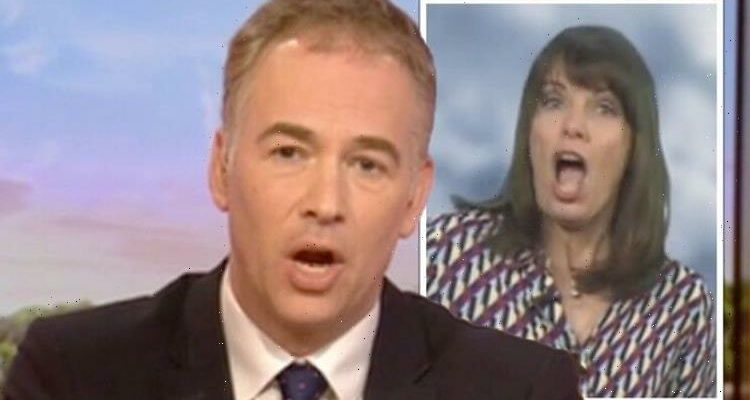 BBC Breakfast hosts Roger Johnson and Rachel Burden marvelled at the weather forecast on Saturday morning as their colleague Susan Powell warned there’s a cold snap on the horizon. The meteorologist revealed the UK is in for a shock weather change in the coming week as snow could be on the way.

During Susan’s weather report, she suggested the UK could be in for a shock weather change.

She explained: “Temperatures come plummeting down. Compare the figures for the coming Thursday to last Thursday and you can knock a good 10 degrees off those temperatures.

“So, warm sunshine to get us through the weekend, but next week as my mum always says ‘Don’t cast a clout till May’s out’.

“We are still in March and it’s very easy for winter to take a good bite back at us, and it looks like that’s what it will do later on in the week,” she revealed.

Roger asked: “You said something more wintery – would you care to be more specific?”

Susan replied: “Well honestly, Roger, next Thursday it looks cold enough, certainly for Scotland, we could see some wintry showers even down to quite low levels.

“For a time we could even see something a little bit wintery across England and Wales.

“That’s a big change and if you’re a bit of an amateur gardener like me that’s something that can often catch you out as well.

“You get out there, you spend all your money on the bedding plants and then you go out and they’re all looking just a little bit charred by the frost.

“I know we’ve got quite chilly nights at the moment, but definitely looking later on into next week it’s looking particularly kind of wintery almost,” she added.

“Yes, yes, but don’t get too excited,” Susan swiftly responded.

She laughed: “I don’t think you need to start building a snowman, but certainly I think it’s definitely just the contrast isn’t it?

“After everyone gets very excited about the fact that we’ve hit 20 degrees and spring is here.

“But, March is a very easy month to get caught out,” Susan commented.

Roger said: “Thank you Susan. Lots of people had their shorts out, I noticed as I was walking the dog yesterday.”

“Yes, it has been hot enough hasn’t it?” Rachel remarked.