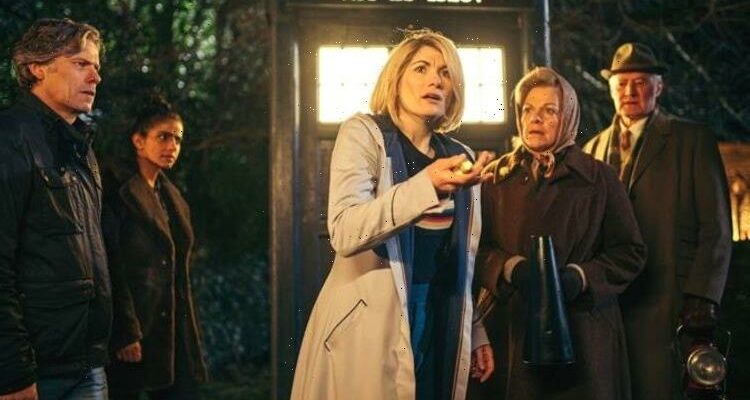 Jodie Whittaker reveals she took something from Doctor Who set

Doctor Who on BBC One has already taken fans across time and space, however on this occasion there is a universe-ending threat to contend with. The Doctor (played by Jodie Whittaker) is once again joined by Yaz (Mandip Gill) and new companion Dan Lewis (John Bishop), but they’ll be meeting some new characters in Village of Angels. Heading to Devon in 1967, a little girl has gone mission and a professor is conducting psychic experiments in a graveyard.

Who guest stars in episode four of Flux?

When the Doctor arrives in the small Devon village, she will quickly realises Professor Jericho is linked to the strange happenings of the town.

Conducting ungodly experiments in the surrounding fields, soon the weeping angels and supernatural scarecrows will be involved.

Kevin McNally is best known for his role as Gibbs in the Pirates of the Caribbean franchise.

More recently, McNally played Bernard Ingham in The Crown and appeared in Das Boot and Catherine the Great.

One of the residents of the community which has become known as the Cursed Village is Claire Brown.

Claire will come to the aid of The Doctor during her frantic visit, but she’ll soon get caught in the middle of the weeping angel’s rising threat.

Speaking to the BBC, Scholey said: “I am absolutely thrilled to be a part of the 13th series of Doctor Who.

“It was a lot of fun to film and I enjoyed every minute I spent with the amazing cast and crew… Halloween will be that little bit more spooky this year!”

Scholey is best known for her roles in Britannia, The Salisbury Poisonings, and Medici.

Reverend Shaw is faced with a daunting realisation in the episode; the supernatural is more real than he ever could have imagined.

The residents will turn to him for help, and he will do what he can to navigate the village’s strange events.

Alex Frost is a relative newcomer to acting, only having starred in a number of roles.

He is best known for Hanna, Silent Witness, and Doctors.

Bel is another resident of the village and is linked to Namaca.

How she exactly fits into the story remains to be seen, but early promos have teased her in the middle of some major action scenes.

Graham recently starred in The Irregulars, Us, and The Letter for the King.

Since Namaca was first teased in early promos, he has been one of the most mysterious characters of the season.

Dressed in what looks like a hippie dystopian style, he clearly isn’t from around town.

Blake Harrison is best known for starring as Neil Sutherland in The Inbetweeners.

Gerald is another resident of the village and is unwittingly caught in the middle of The Doctor’s plans.

It seems he, and his wife Jean, will be meeting The Doctor early on, as promos show the pair outside the Tardis.

Rounding out the guest stars is Jemma Churchill as Jean.

As Gerald’s wife, the pair will be caught in the middle of the escalating horror of the weeping angel’s threat.

Churchill could recently be seen in Alma’s Not Normal, Curfew, and Nativity Rocks!

Doctor Who Flux continues Sunday, November 21 on BBC One.