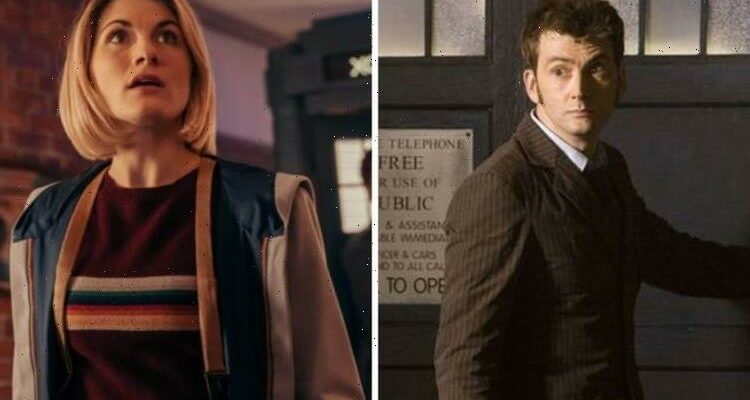 Doctor Who fans have been desperate to find out who the fourteenth Doctor will be ever since it was confirmed Jodie Whittaker would be leaving the hit BBC sci-fi series. It has now emerged Hollywood actor Michael Sheen, 52, is joint-favourite to be the next to step into the Tardis. Having worked with former Doctor David Tennant on Good Omens, could the actor be following in his co-star’s footsteps?

The Welsh actor is now 6-4 joint-favourite to be the next Doctor, according to William Hill.

He is currently settling into his new role on the Gogglebox sofa, and was 12-1 only weeks ago.

In a dictionary definition of small worlds, Michael is set to begin filming the second season of Good Omens, where he appears alongside former Time Lord David Tennant in the Amazon Prime fantasy.

Jodie has already filmed her regeneration scene and, with the six-part, thirteenth series of the hit BBC sci-fi about to drop, she admitted to being as much in the dark as the millions of Who fans worldwide, who have been speculating who her replacement could be.

Jodie, 39, became the show’s first female lead in the summer of 2017 and is due to hand over her keys to the Tardis after this Autumn’s series, titled Flux, which begins on October 31, and three specials scheduled throughout 2022.

Speaking on BBC One’s Graham Norton Show, the actress said: “They are never going to tell me who it is.”

She added: “We filmed some scenes, but the new Doctor wasn’t there.

“I wasn’t there for Peter (Capaldi), and I only met him months later when I passed him in the street!”

Returning showrunner Russell T. Davies, who casted Christopher Eccleston as well as Tennant as the ninth and tenth doctors, could be hoping to cast someone with a connection to a previous Doctor.

As well as BBC’s Good Omens, Sheen’s recent works include 2019 drama Prodigal Son and his role as former Who Wants To Be A Millionaire host Chris Tarrant in 2020’s Quiz.

The film depicts the story of the coughing scandal on the hit quiz show, which happened in 2001.

It’s possible he could be the new face of the long-running series.

However, Russell is reportedly keen on Years and Years frontman and It’s A Sin star Olly Alexander.

The pair worked together on the show earlier this year. Like Sheen, Alexander’s odds are currently at 6-4.

The 31-year-old would be the first openly LGBTQ+ actor in the role if he were cast.

Also in the running is T’Nia Miller, backed in to 7-1 and her star continues to rise.

Miller is another to have worked with Davies before on the six-part 2019 series Years and Years, and even appeared in Doctor Who as The General in 2015’s Hell Bent, starring Peter Capaldi.

Another recurring name is Michaela Coel, star of I May Destroy You.

Doctor Who is available to watch on BBC iPlayer.