In 1965 singer Rubén Guevara got his big break on national TV, performing on the ABC musical variety series Shindig! There was just one catch. He had to drop his real name in favor of an acceptably anglo one: Jay P. Mobey.

There he was on black and white TV, primetime, shaking his groove thing with Tina Turner and Bo Diddley, commanding the stage, under a name that erased his Mexican-American identity.

“I didn’t want to change my name,” Guevara remembers in the new documentary Con Safos. “I was torn about it, but I was young and I wanted to make a name for myself. I just never imagined I’d have to do it with a made up one.”

The documentary, directed by Michael Vargas and Moni Vargas, premieres Wednesday night on  KCET, as the first episode of the PBS station’s new season of Artbound. The film recounts how Guevara left that phony stage name behind in 1966, and went on to build an authentic artistic identity as Rubén Funkahuatl Guevara—singer, actor, performance artist, writer, activist and pioneering voice of Chicano culture. 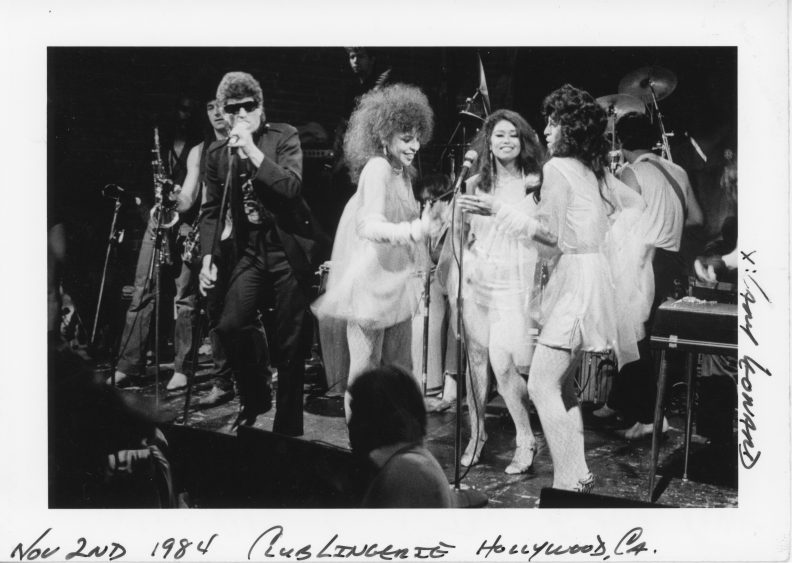 “Rubén should be in the history of not only L.A. but in the history of the United States arts and culture as a whole,” Juan Devis, chief creative officer of KCET and PBS SoCal, said at a press event for the documentary. “It is so important to be able to give credit where credit is due.”

The film rewinds to Guevara’s youth in a multicultural area of the westside of Los Angeles known as La Veinte. His father, a native of Mexico, was a noted musician and Rubén inherited his musical talent. He learned to sing boleros from his father, but later gravitated to a more American sound: doo-wop and rock n’ roll.

“I still appreciated the traditional music my dad played,” Guevara says in Con Safos. “But I wanted to swing. I wanted to rock, man. Let’s face it, I was Mexican and American.”

He formed a doo-wop group called The Apollo Brothers, then later landed the Shindig! gig. After that show was canceled, he returned to school at Los Angeles City College and began pursuing Chicano Studies, a development that would raise his consciousness. Guevara, like many kids of his background, had always been caught between cultures.

Guevara would come to embrace the term Chicano as saying something distinct about his roots and his political engagement. 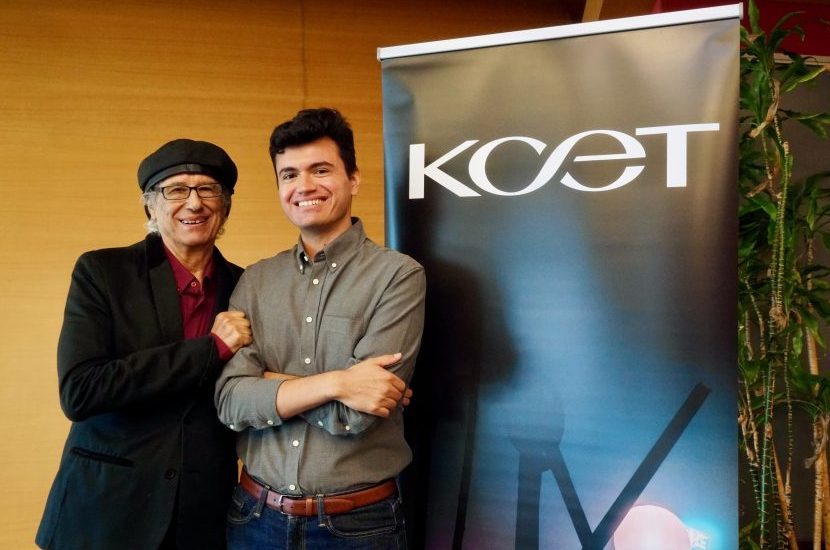 “The term Chicano originally was in some circles pejorative, especially with the upper classes in Mexico,” Guevara explained at the press event at KCET headquarters. “The Mexican-Americans up here knew they were Chicano—that’s just part of how we grew up. But it didn’t become politicized until the ‘60s with the Chicano civil rights movement. The students flipped that into a positive statement of empowerment.”

He continued, “Essentially a Chicano is a Mexican-American activist. I take that activism into art. So when I call myself a ‘Chicano Culture Sculptor’ I’m doing that—I’m an activist and an artist at the same time, documenting my culture.”

In the early 1970s Guevara connected with musician Frank Zappa, who coincidentally had made an earlier concept album called Cruising With Ruben and the Jets. Zappa proposed that Guevara form a real Ruben and the Jets band and perform as an opening act for Zappa’s group, The Mothers of Invention. Zappa produced their first record; a follow up album, called Con Safos (“With Respect”) was released in 1974.

“Ruben and the Jets was Mexican-American rock theater,” Guevara explained. Since the group’s breakup in the mid-70s, Rubén has expressed his creative vision through theater pieces, albums, poetry and a memoir, Confessions of a Radical Chicano Doo-Wop Singer. He has also appeared in films, including Cheech and Chong’s Nice Dreams, starring his friend and fellow self-identified Chicano, Cheech Marin.

His artistic output and focus on Chicano identity has earned him a couple of sobriquets (or perhaps I should say apodos): Chicano Godfather and the God of Funk. 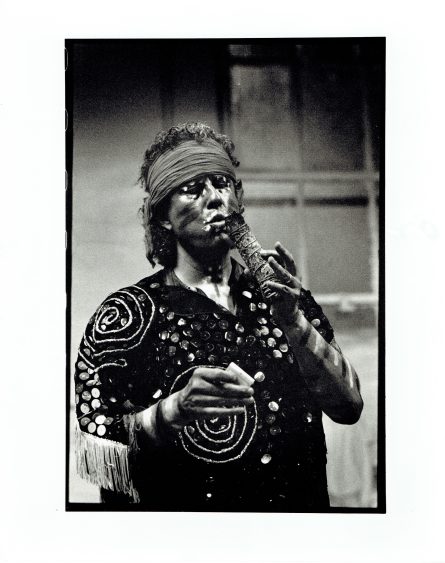 “It sounds cool,” Guevara allows in regards to “Chicano Godfather.” But it’s the latter nickname—“God of Funk”—that has more meaning for him because it gestures toward what he calls his alter ego, “Funkahuatl.” He came up with Funkahuatl originally for a theater work, and has since adopted it as his middle name.

“The ‘Funk’ is my American side,” he said, “and ‘Huatl’ was my indigenous ancestry side, although I’m not of Aztec ancestry. So I wanted to combine those two into one word. And also for me it was like naming myself, non-colonialized name… I wanted to have my own identity. My own funky identity.”

“There’s so many universal elements in this story, about how peoples get divided from each other. The Pocho wall—the divide between Mexican-Americans and Mexican nationals, it’s identical to the Asian-American and the Asian national divide,” Kwon noted. “It’s identical to the African-American and the African national divide… That’s a real kind of universal phenomena of the American experience of assimilation.” 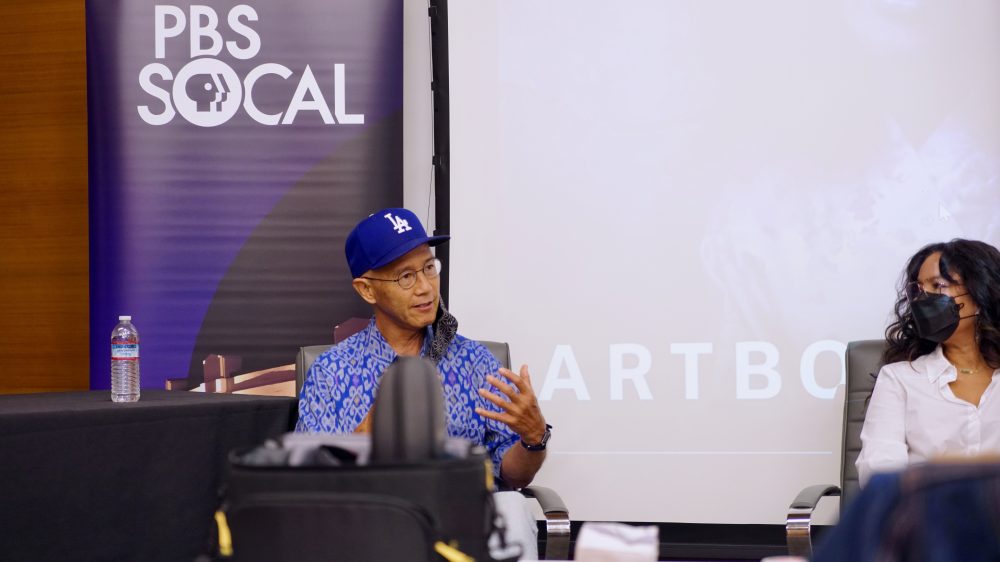 He added, “The personal is very political. This story is really a classic example of how these personal, individual experiences are related to larger societal phenomena.”

Co-director Moni Vargas sees Con Safos as “a way to combat the erasure of this culture, of Chicano culture, of Latin culture, of all of the contributions that we as Latin-Americans or LatinX… that we have made to this culture as a whole… We’ve been here. The border crossed us, in a way… As much as people try to erase and invisbilize us, we’re here. And we’re not going anywhere.”

After its premiere on KCET on Wednesday, Con Safos airs Friday night on PBS SoCal. It premieres on the online platform LinkTV next Tuesday.