When Debra Jo Rupp was cast on WandaVision, it became one of those art-imitates-life-imitates-art situations. On the show — Marvel Studio’s first foray into television — she plays Mrs. Hart, the inquiring wife of Vision’s new boss. On set, Rupp found herself equally curious about the puzzle box she’d found herself in.

“You get your part and there’s only so much you know,” she tells ET’s Ash Crossan. “Then if you need to know more, I am like a gnat. When I have a question, I will ask 200 people until I get the answer. So, I did find out probably some disallowed things.”

Not that she necessarily could explain it all now. The premise of the series — Marvel superheroes by way of classic sitcoms — proved even stranger to Rupp since she wasn’t familiar with the MCU to begin with. “They said, ‘We want you to be a part of this. It’s kind of weird. It’s very hard to explain, but we’ll do the best we can.'” It was her iconic portrayal of Kitty Forman on That ’70s Show, in part, that drew director Matt Shakman to cast her opposite Elizabeth Olsen and Paul Bettany.

“They needed someone who knew sitcom, because it was the beginning of their filming and the others didn’t have as much experience,” Rupp explains, “and then they needed someone who could do drama, which he knew from my theater [work]. They sort of tried to explain it to me, none of which I understood. Like, none. Like, zip. And I did it because my great nephew said, ‘Aunt Debby, if you don’t do this, I will never speak to you again.'” 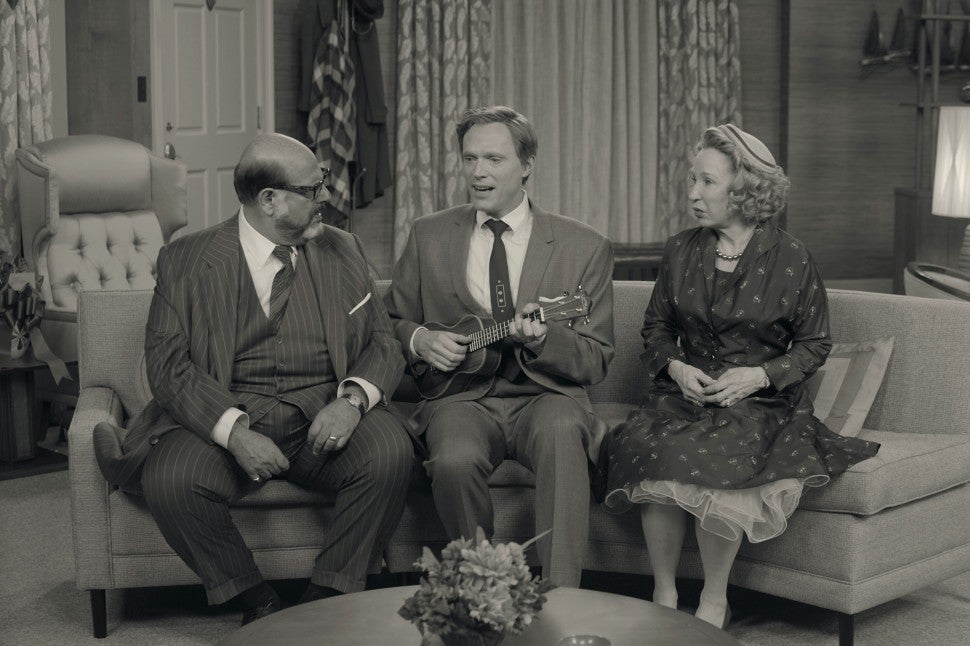 WandaVision‘s ’50s-set first episode was filmed in front of a live studio audience, a new experience for Olsen and Bettany, but which Rupp was no stranger to after filming eight seasons of That ’70s Show in front of an audience — with one Thanos-sized exception.

“The live audience was coming to see Marvel. They weren’t coming to see a sitcom,” she recalls. “So, when we started this as a sitcom, you could just feel, like, heavy confusion. Like ‘What…?!‘ They recognized Lizzie and Paul, but they were confused. And I loved it. I just loved it!”

Episode 1 sees Wanda and Vision hosting a dinner party for his boss, Arthur (Fred Melamed), and Mrs. Hart. (For comic book readers, their characters might call to mind poor George and Nora from Tom King’s The Vision.) Hijinks and hilarity lead to an “Old MacDonald” singalong, but when Arthur begins choking during the meal, Mrs. Hart has a rather strange reaction and the super-couple’s sitcom life warps into The Twilight Zone. “I get to do, like, the first crack,” Rupp grins.

Since the episode dropped, Rupp has been inundated online with theories and some “very bizarre questions,” and since she knows a bit more than she’s perhaps supposed to, she also knows which viewers are closer to figuring it out than others. “There was one person that was kind of very close.” Many suspect there’s more to the Westview neighbors than meets the eye, so we asked Rupp: Are we right to be intrigued by Mrs. Hart and what she could possibly be a part of in the future?

She pauses for five full seconds, then smiles and simply says, “Yes.”