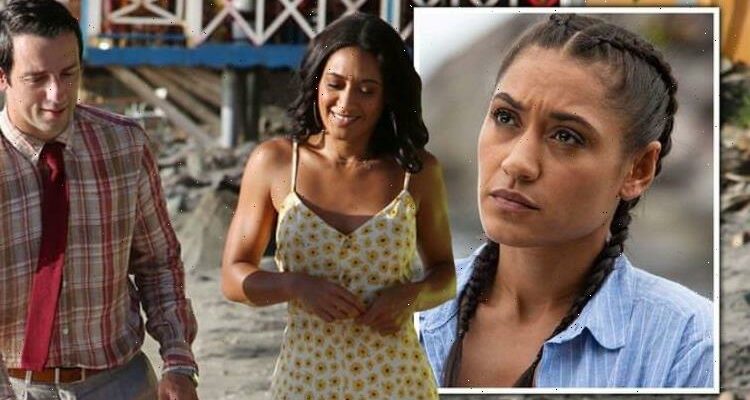 Florence Cassell (played by Josephine Jobert) arrived in Saint Marie in season four of Death in Paradise and took over from Camille Bordey (Sara Martins). The detective left the BBC drama in 2019 but returned last year to work alongside Neville Parker (Ralf Little). Speaking out in a recent interview, the actress revealed her first impressions of the latest lead detective.

He then began working with Florence before his departure and subsequent replacement in season six.

Josephine starred alongside Ardal O’Hanlon who played lead detective Jack Mooney before leaving the show herself in season eight.

When Florence returned to the Saint Marie police force, new detective Neville was in charge.

Speaking about their on-screen partnership, Josephine revealed how happy she was to be working with him.

She said: “Ralf is something else, he’s another energy, he’s a bit younger, a bit crazier!

“And I remember, I think it was when we were in quarantine and I was watching TV and I saw series nine of Death in Paradise, and I saw his character and I thought, ‘Oh my god, it’s totally different from anything we’ve had before!’ And I really, really liked it.

“I liked the way he was playing it and everything about his character.”

“I was so happy to work with him,” the actress told Hello! magazine.

Josephine explained Kris will always be “special” to her because he was the first actor she worked alongside on the show.

The actress shared how Kris helped her a lot with settling into life on the Death in Paradise set.

Josephine revealed she felt like a “mum” to Ardal and wanted to make him feel at home on the show.

Meanwhile, an interview with Kris and Lorraine Kelly has recently resurfaced with detailed the reason for the actor deciding to quit the BBC show.

The Humphrey Goodman star starred in the drama from 2014 until 2017.

He said: “The thing is, after doing four great years on Guadeloupe, the island where we filmed Death in Paradise, I realised that I really had to get my son to school.

“He was becoming a bit too Caribbean, he refused to wear shoes and would only drink coconut water and eat pineapple.

“He was very good on the beach, but not very good with Maths and English so I decided it was time to get him back into school,” Kris added.

“Six months later, I’m standing on a film set in a car park in Dagenham at four o’clock in the morning thinking ‘Have I made the right decision?’”

The interview recently resurfaced on Twitter and fans of Death in Paradise weren’t impressed with Kris’ explanation.

Death in Paradise is available on BBC iPlayer.