EXCLUSIVE: David Harewood, star of stage and screen, was intrigued when an unsolicited short-film screenplay entitled Man to Man arrived in his inbox. “I literally read it in 20 minutes. I was moved by it,” he enthused of the script by youthful writers Selorm Adonu and Ignatius Kalule.

Harewood read Man to Man a second time and soon was off to a meeting with its director Shehroze Khan and members of Million Youth Media, one of the fastest-growing platforms for young filmmakers in the UK. It’s run under the auspices of Fully Focused Productions, a community network of young creatives who hail from across the UK, and further. Watch a clip from the film below.

”I was moved by their stories, of where they came from, how they approach the business, and I agreed to meet with them,” Harewood told Deadline.

“They’re all kids!” he marveled. “I was blown away by their passion for filmmaking. They all come from various backgrounds, and I just loved the way they were inspired by storytelling and filmmaking,” said the actor who’s known for his work in TV shows Homeland, The Night Manager and Supergirl and films including Blood Diamond, during a conversation with Deadline in London.

Harewood’s a creature of the stage, too. A recent appearance saw him daringly cast to portray William F. Buckley Jr. opposite Charles Edwards (Downton Abbey) as Gore Vidal in a scorching clash-of-the-political-titans drama called Best of Enemies, by James Graham (Sherwood) at London’s Young Vic Theatre. The play transfers to the West End in November. The play won the best theater prize at the Sky Arts South Bank Show Awards this month. (Full disclosure: This reporter is a member of the South Bank Show Awards panel.)

He’s a busy man, but Harewood told the group from MYM, “All right, I’m in!” 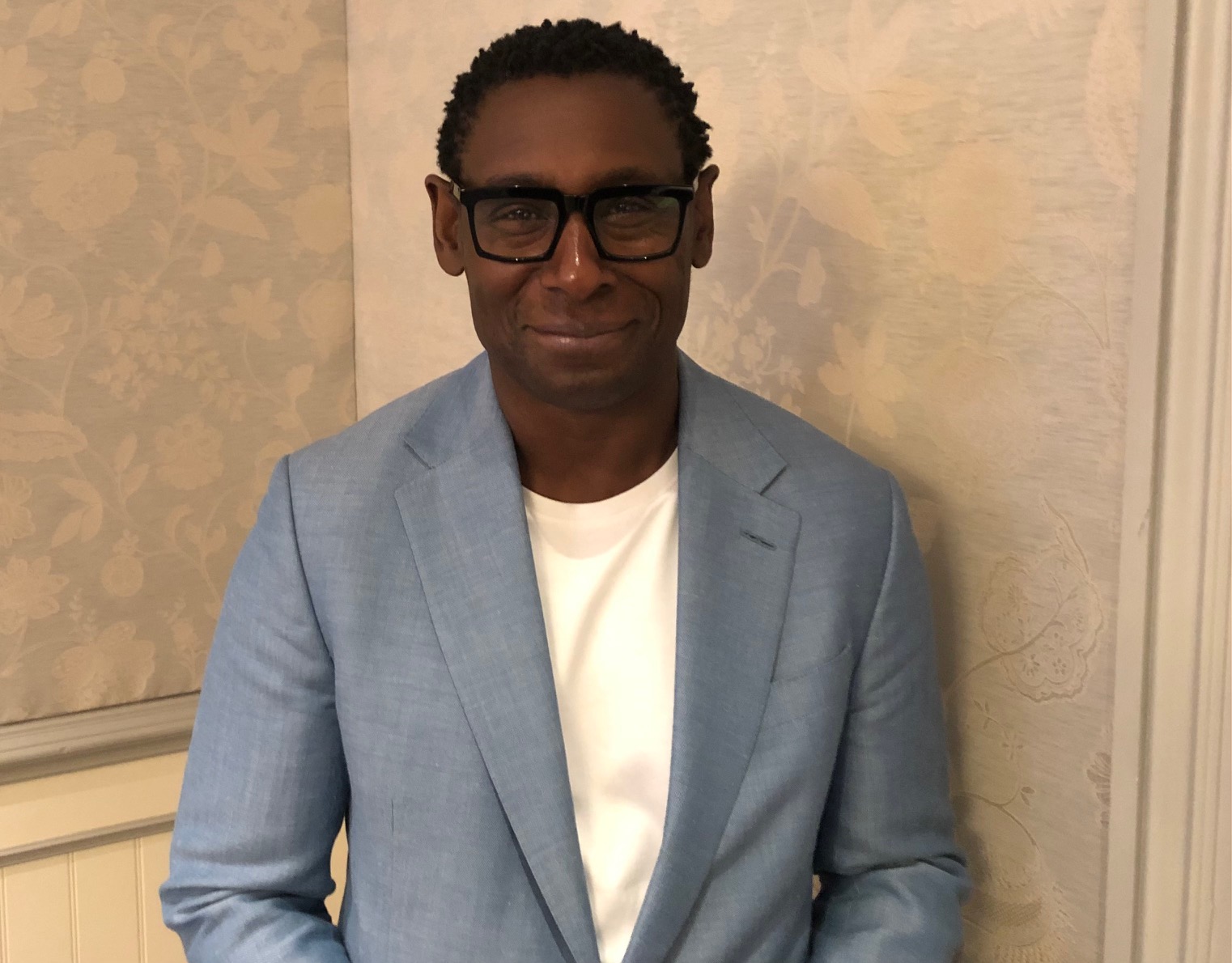 The MYM filmmakers range in age from 18 to early 20s. That was one of the key attractions for Harewood. “I’m so pleased to be working with this new generation of filmmakers — black British who feel they’ve got stories to tell.”

More importantly, “we are now getting into rooms that we have never been invited into before. We’ve just got to hope that progresses into all things so that we can start steering things in a more diverse fashion,” Harewood said.

”There are some really talented black creatives in the industry now, not just in front of the camera but also behind the camera,” he said. “That’s really exciting.”

Harewood said that he was moved by his association with the Man to Man cast and crew. “They helped me,” he said.

”It was one of the best things I’ve done in a long time,” he said of the film about a son, played by co-writer Adonu, and his father (Harewood). “I enjoyed the character and I enjoyed the idea. That’s the power of storytelling. This man, he’s trying to speak to these young kids. There’s a whole new generation of young black British people out there now and maybe they’re not in touch with the generation that we are.”

Man to Man is partly based on Adonu’s relationship with his own father. In co-writing the screenplay with Kalule, he said, “I was more focused on trying to do something in this time zone, but he, my dad, wants to do something in his time zone, and the zones clash a lot. The older generation always thinks they are right, and in Man to Man they see the new generation as spoilt, lazy and always on our screens,” Adonu told Deadline. “It’s like, ‘Dad, can you hear me?!”

Adonu continued,” I wanted to create this idea of stop blaming each other and let’s meet in a time zone in the middle.”

Man to Man was one of five short films that Rosa Powloski, head of Strategy, Programmes & Operations at Fully Focused and MYM, and Nick Bedu (PRU), the organization’s co-founder, invited Deadline to view at a community screening in north London. 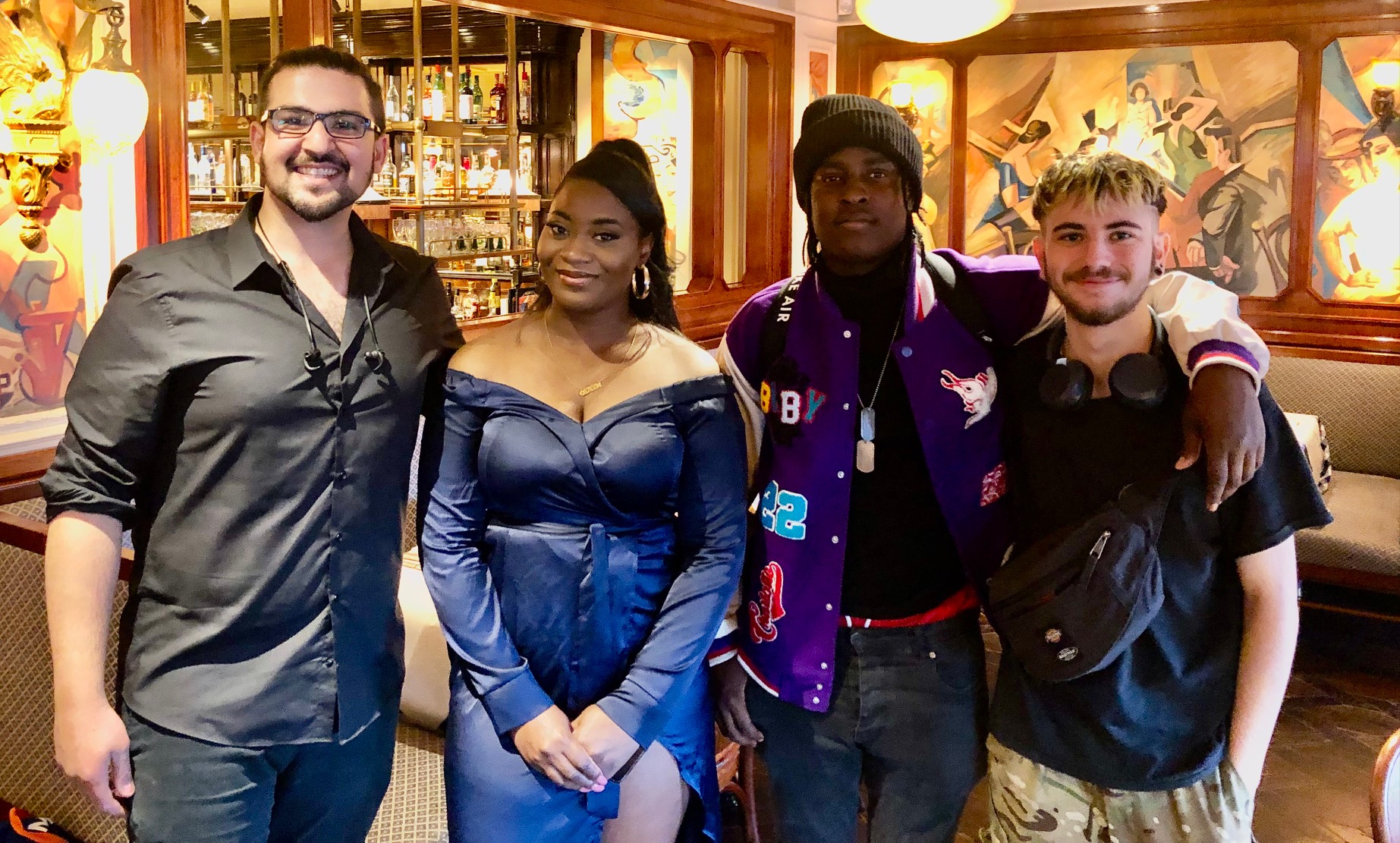 The films are Queen of Diamonds, by writer Omar Khan and directed by Shehroze Khan; Wounded, written and directed by Zaheer Raja; Mask, by Aaliyah Mckay; 27, written by Anthony Ray Caballero and directed by Judah Meade; and aforementioned Man to Man. They were funded by a £40,000 one-off grant from Netflix, and Powloski hopes the streamer will “hopefully, fund us again in the future.”

The money was the first output of non-restrictive funding that MYM had received in its 12-year history. Powloski said they receive many streams of funding, but often it’s through being commissioned to make charity films about identity, cyber-bullying, knife crime and other topics that help bring about an awareness of a subject. The downside, as Powloski, puts it, is that the films are “all problem-based” and she feels that “we are doing them a disservice if that’s the only films we make. Our founders charity or foundation founders are funding films about a problem, so we’re already setting our young people up to say, ‘This is a problem, let’s make a film around a problem.’ Instead we should be saying: ‘You’re young, you’re brilliant, what do you want to make a film about?’”

The funding from Netflix allowed MYM filmmakers to write, direct and shoot films of their choosing. Nick Bedu noted that the films were chosen through a pitch process. The MYM membership “got to pitch in front of a panel of producers and filmmakers” to decide which films would be made used the £40,000 Netflix fund.

The panel structure is used for other MYM films as well. “The youth team that’s in training at any one time make the decisions on which films will be made,” Bedu explained. 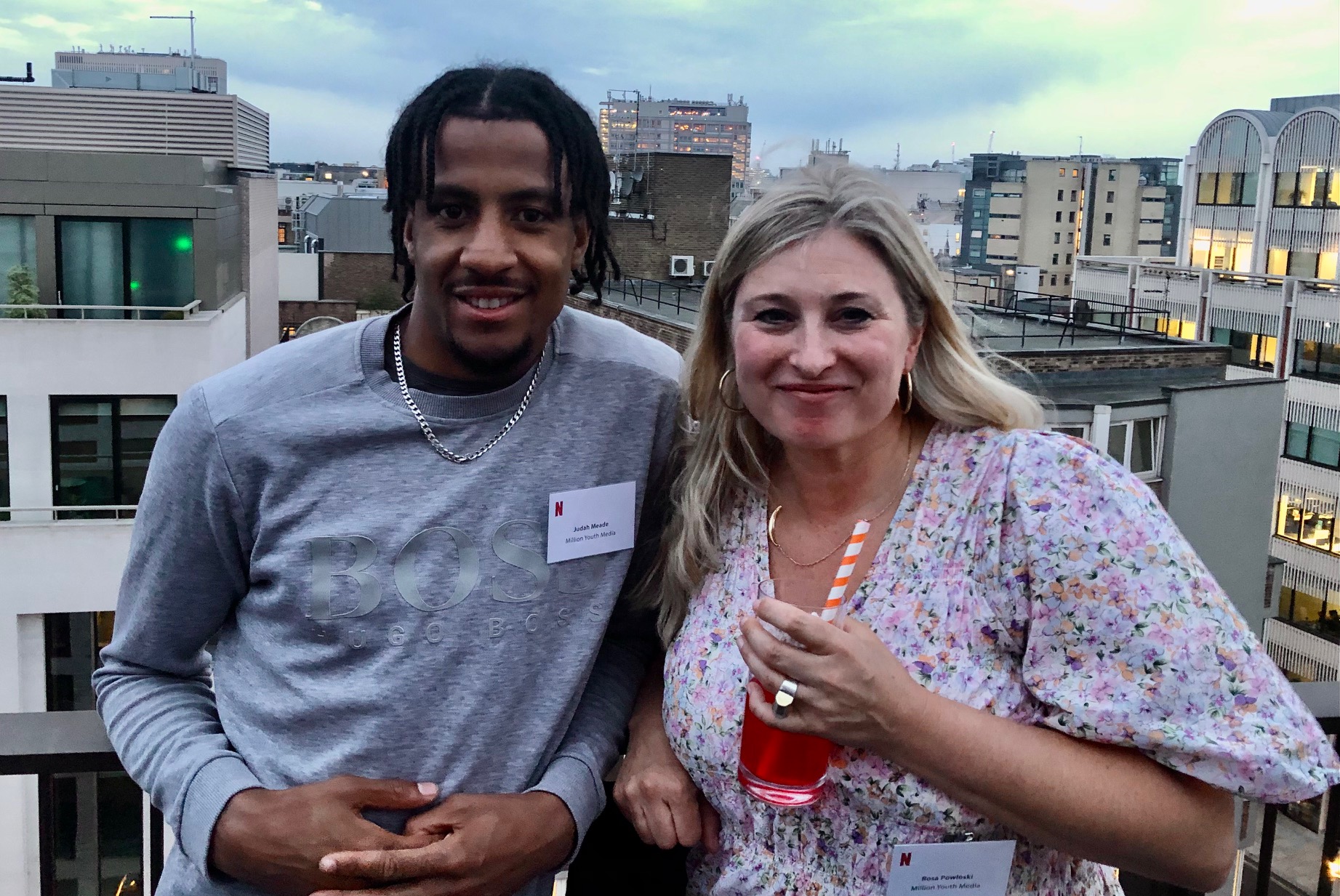 Powloski laughed. “There might be a film that we like the sound of, but unless the youth panel want to make it, then it doesn’t get made,” she said. “The films are picked — quite rightly, I think you can say — on an ethical basis.”

All five films are impressive. For instance, Mckay’s film Mask, starring Adesayo Talabi, a satirist and spoken-word artist, is “I would say a comedy, but at the same time quite drama-based,” said Mckay, about “a girl who goes to her workplace in her natural hair for the first time and freaks them out, or maybe opens them up to their truth. I have no idea!” 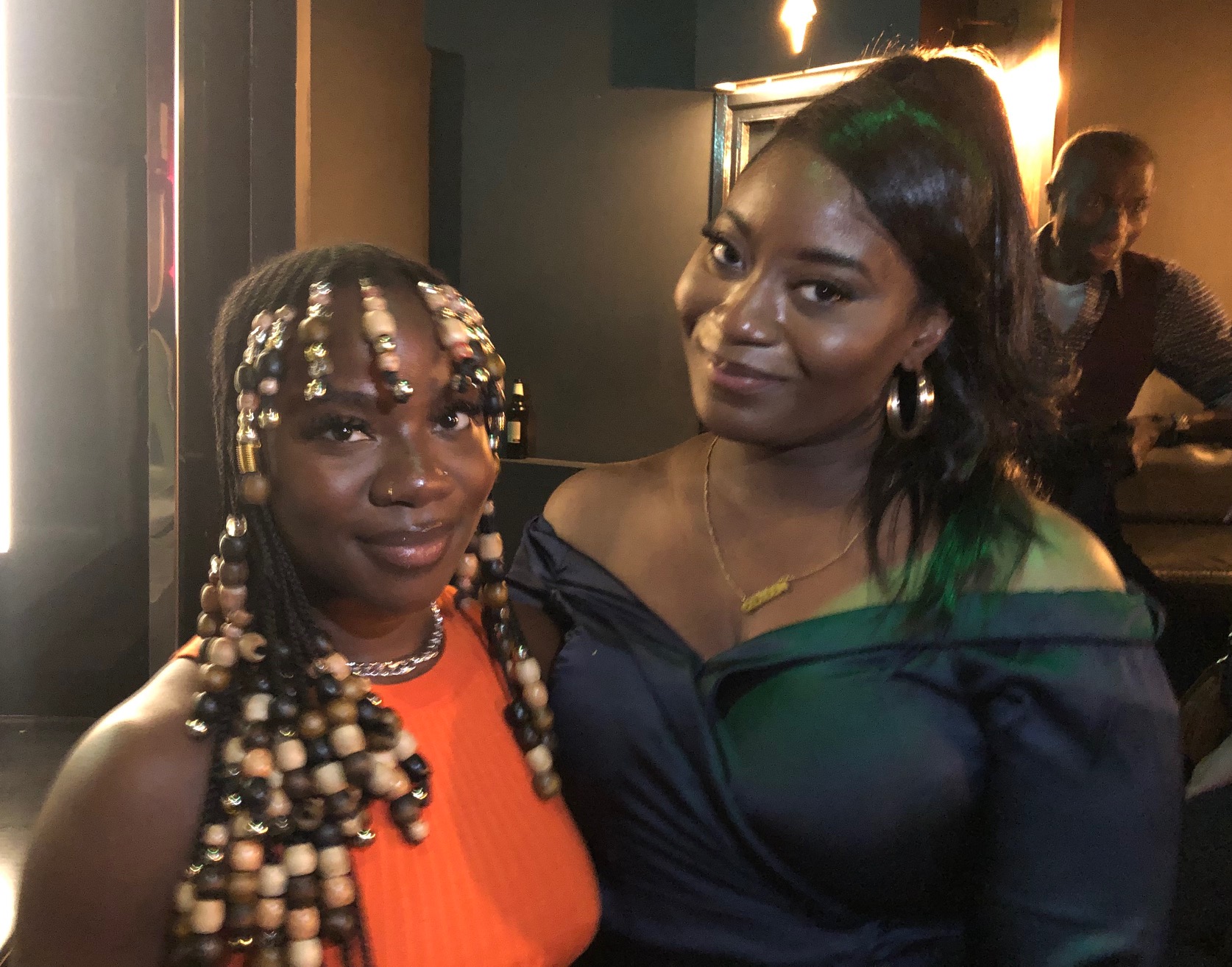 Mckay, who has worked as an assistant director on plays at the Chichester Festival Theatre in West Sussex, Theatre Royal Stratford East in London’s East End and the Crucible Theatre in Sheffield, wrote a monologue called Mask during lockdown. After the piece was published in an anthology, Mckay adapted it for the screen and sent it to Powloski to read and offer guidance. “This is my first film that I’ve written and directed,” said Mckay. “It won’t be my last.”

The films will be released on the MYM channel over the next six months. Follow @ukfullyfocused for launch dates.

Here is a clip from Man to Man featuring Harewood and Adonu:

Hollywood Unions Sign Off On Extension Of Covid Protocols Through September