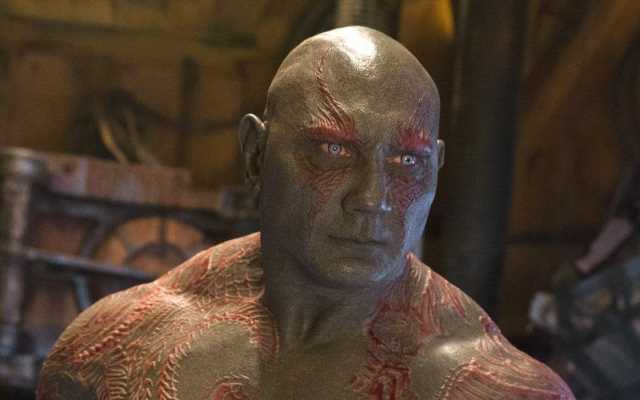 While he’s ‘grateful’ for being part of MCU, the ‘Glass Onion: A Knives Out Mystery’ actor calls it a ‘relief’ that his time playing Drax the Destroyer is over.

AceShowbiz -Since he made his transition from wrestling to acting, Dave Bautista is perhaps best known for his role as Drax the Destroyer. After making his debut appearance as the character in “Guardians of the Galaxy” (2014), he continues to land bigger roles and now is more than eager to leave behind his image as the green-skinned warrior as “Guardians of the Galaxy Vol. 3” marks his swan song as Drax.

Speaking to GQ Hype, the 53-year-old calls it “a relief” that his time playing “silly” Drax is over, because “it wasn’t all pleasant.” He shares, “I’m so grateful for Drax. I love him. But there’s a relief [that it’s over].”

The “Glass Onion: A Knives Out Mystery” star explains, “It wasn’t all pleasant. It was hard playing that role. The makeup process was beating me down.” Revealing his hope to play more serious roles, he adds, “And I just don’t know if I want Drax to be my legacy – it’s a silly performance, and I want to do more dramatic stuff.”

Despite his ambition to grow better in the industry, Bautista claims his goal is neither fame nor awards, but improving his acting chops and making interesting projects instead. “I never wanted to be the next Rock,” he says, referring to Dwayne “The Rock” Johnson, who also made the leap from the WWE to Hollywood. “I just want to be a good f**king actor. A respected actor.”

“Honestly, I could give a f**k [about being a movie star],” he insists. “I don’t live a great big glamorous life. I live here in Tampa. I don’t care about the spotlight. I don’t care about fame. I just want to be a better actor. I want respect from my peers. I don’t need accolades – I really don’t, man. It’s about the experience, about knowing that I accomplished something.”

Bautista wrapped the filming of “GOTG 3” last May. Marking his last day as Drax, he shared on Instagram a photo of him with his co-stars and director James Gunn. “Haven’t found the words yet. It ended so suddenly and I was on to my next film before I could process it all. End of a journey that changed my life,” he penned in the caption.