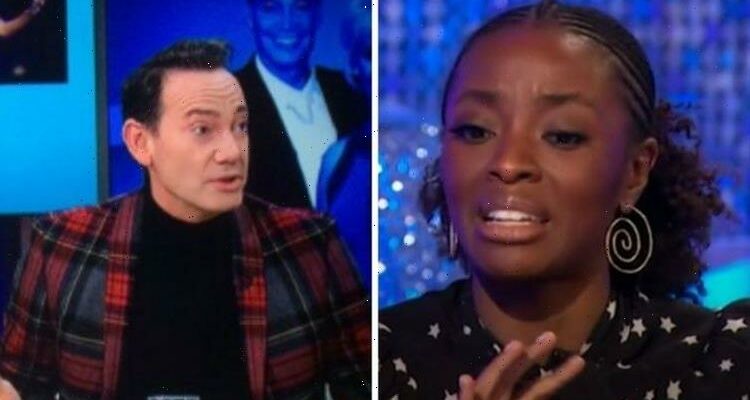 TV presenter AJ Odudu suffered an injury to her ankle earlier this week, just days before the all-important final of the BBC series. In a Strictly Come Dancing first, the 33-year-old may be forced to pull out at the very last minute after admitting she “couldn’t stand up”. Appearing on Thursday’s Good Morning Britain, judge Craig Revel Horwood gave an update on the situation, confirming AJ has now had treatment.

He explained the presenter has now had treatment, which is a promising step.

“Was it a twisted ankle?” Host Ben asked, trying to work out the cause of AJ’s unfortunate injury.

“No, I think she just went over on it,” Craig replied. “And then she hurt the ligament.”

The long-term dance judge added: “I have been through this myself, with my shoulder.

“I had an injection to get through it, and then it was fine

“I’m hoping and praying – because she is so good, and I will really miss her if she’s not there.”

“You got through to the final,” Charlotte commented while turning to Debbie. “It’s so much work!”

The presenter continued: “She must be absolutely devastated that she’s got to this stage and then had something like this happen.”

“Oh, absolutely,” Debbie replied. “And I think it must be the worst week, isn’t it? It really is.

“She has got a new dance to learn this week, as well.

“It’s horrible for her and for Kai – it’s his first series, he’s done so well.”

Asked if the injury could be taken into account by judges, Craig answered: “The point about judging on the final is we don’t actually have any power at all.

“And it’s the audience alone who decide. Yes, our scores are representative but they’re not taken into account.

“So, I mean AJ could win the hearts and minds of the nation and sail through to the Glitterball Trophy.

Good Morning Britain airs weekdays at 6am on ITV, while the Strictly Come Dancing final airs on Saturday at 7pm on BBC One.