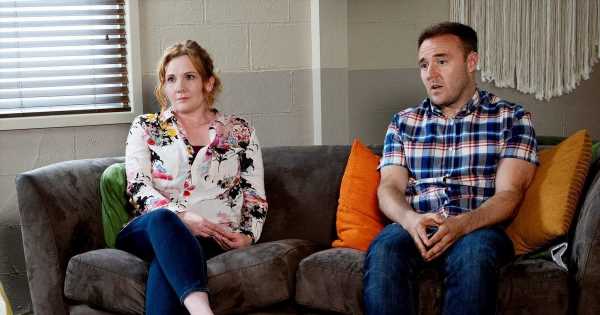 Tyrone returns from his break with Phill and admits to Fiz that they’re no further forward as every time he tried to broach the subject of marriage, Phill became upset.

When Fiz lets slip over coffee at Roy's Rolls that she likes a man in uniform, Phill calls at the factory dressed as Richard Gear from An Officer and a Gentleman.

To Fiz’s horror, attempts to lift her up, but his back goes and he drops her, leaving his new wife mortified.

She helps Phill into A&E and explains to the receptionist that he’s hurt his back.

Fiz confirms that she’s meeting Phill in the café as he’s promised to sign the annulment form but he's shocked when he asks her to go to a couple’s therapy session with him, and even more shocked when it turns out to be the same therapist she and Tyrone are seeing.

Evelyn Plummer (Maureen Lipman) decides to have a chat with Phill but he is distracted when he realises he left his phone at the therapist – the very one who is currently sat chatting to Tyrone and Fiz.

The therapist makes it clear that she’s not impressed with their lies and deceit.

Suddenly there’s a knock on the surgery door and Phill appears, looking for his phone.

After some wise words from Evelyn it looks like he will sign the forms but a farewell chat with Hope puts a different light on things.

Elsewhere in Weatherfield, Audrey Roberts (Sue Nicholls) is underwhelmed by her birthday meal and as the family take her to show her their surprise she discovers that they’ve signed a rental agreement with Debbie Webster (Sue Devenay) and her old salon is now hers again.

Audrey assures her that it’s nothing a good night’s sleep won’t put right and fails to mention that she’s lying in a hospital bed.

Abi and Alfie visit Kevin and Jack at No.13 and she reveals that if all goes to plan they can move back in next week.

For the latest breaking news and stories from across the globe from the Daily Star, sign up for our newsletter by clicking here