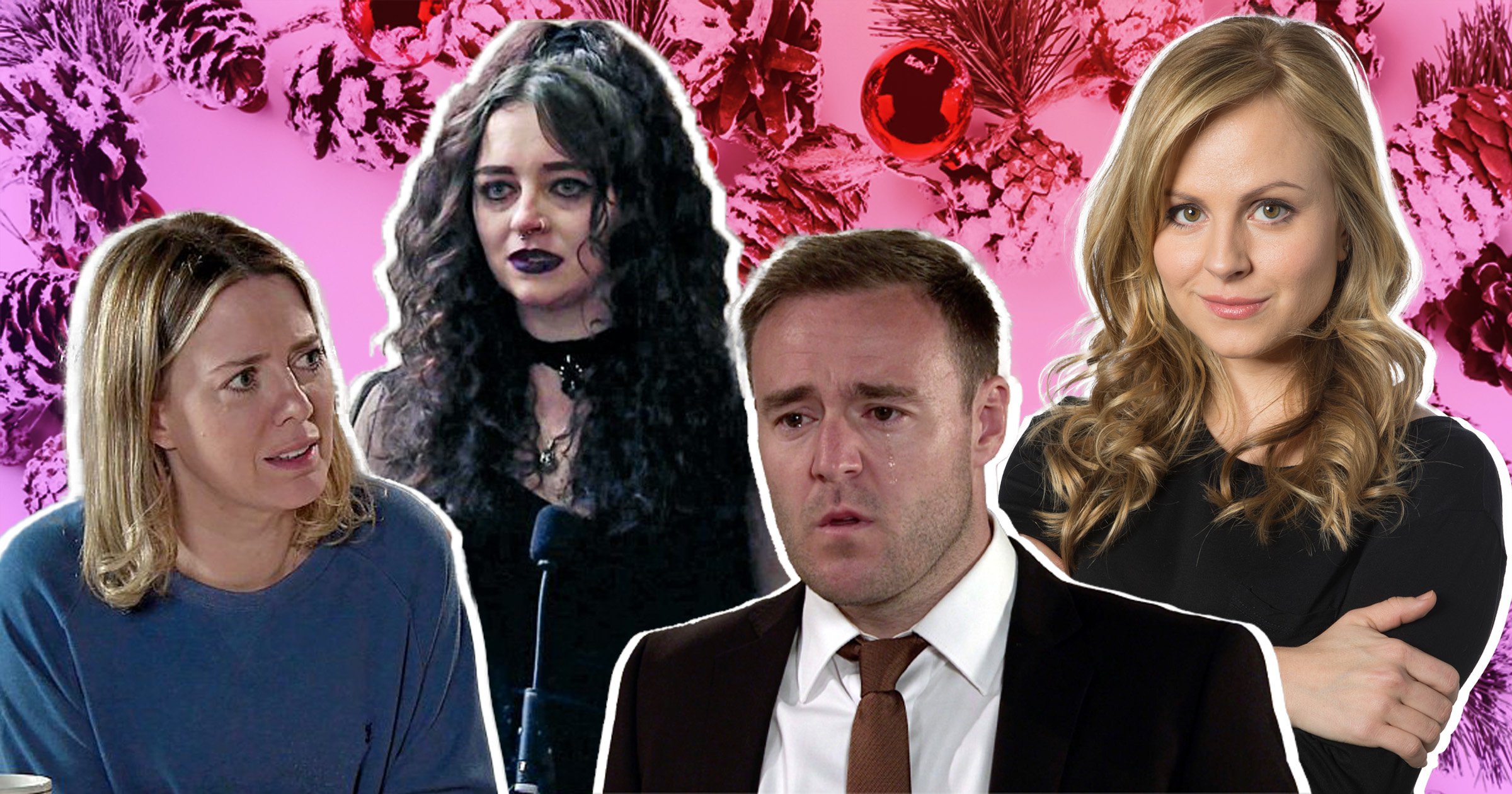 Get ready for an eventful Christmas period on Coronation Street, as the folks of Weatherfield brace themselves for yet another festive season. After all, Christmas never runs smoothly in the Street.

This year we have wedding bells ringing for Curtis (Sam Retford) and Emma (Alexandra Mardell) – but will the wedding go ahead?

Fresh back from her own honeymoon, Abi (Sally Carman) realises that she can’t move on from the death of Seb and targets Kelly (Millie Gibson). Meanwhile Tyrone (Alan Halsall) targets Fiz (Jennie McAlpine) in a different way as the Christmas spirit leads him to make a reckless move.

There are anxious times in store for Nina (Mollie Gallagher) as she struggles with her mental health in the wake of Seb’s death. And there’s heartbreak for some and new romance for others, as well as squabbles around the turkey, some questionable Christmas gifts, a sing-song and Audrey (Sue Nicholls) enjoying a boozy breakfast.

Here’s everything you’ve got to look forward to at Christmas in Coronation Street.

With Emma all set to marry Curtis, Steve (Simon Gregson) realises that the money he asked Curtis to transfer to the charity account hasn’t gone through. Amy (Elle Mulvaney) tells Steve that Curtis isn’t dying – in fact he’s a pathological liar. Steve is stunned and he and Amy rush to find Curtis.

Meanwhile, Emma is waiting at the wedding venue for Curtis to appear. Has he done a runner before his crimes can be revealed? Or are there further twists still to come as the full scale of Curtis’s deceptions start to become clear? Either way, it looks like Emma is heading for heartbreak.

Abi’s not in the mood for Christmas

When Abi and Kevin (Michael Le Vell) get back from their honeymoon, Abi is not best pleased to find that Kelly is now living at number 7 and working at the barber’s. How can she enjoy Christmas with a daily reminder of Seb’s death right under her nose?

Meanwhile, Kevin makes a shock discovery when Tyrone hands him a bundle of Seb’s things that Emma found in the flat. As Kevin reads a letter that he finds among the stuff, his jaw drops. He discovers that even from beyond the grave, Seb might have provided a way to give Abi the best Christmas present ever.

When Abi finds Kelly has left flowers in Seb’s memorial garden she’s fuming, and despite Kevin trying to reason with her she sets about a campaign to get rid of Kelly for good.

As Abi makes Kelly’s life in the Street more and more difficult, she stops her from going to work at the barbers. When Maria (Samia Longchambon) asks Kelly why she failed to turn up, Kelly doesn’t want to tell her the real reason, and says she couldn’t be bothered.

Maria sacks her, and it’s the start of a downward spiral for Kelly. Craig (Colson Smith) urges her to get help, but Kelly feels like she has nowhere to turn.

Tyrone wants to win Fiz back

Tyrone is overjoyed when he gets to spend Christmas with Fiz and the girls – and if it means having to put up with Phill (Jamie Kenna), that’s the price he’ll pay.

But in a mad moment of seasonal joy, a tipsy Tyrone decides to give Fiz a cheeky kiss. Will he get the response he’s hoping for?

Tyrone is confident that it’s only a matter of time before Phill gets bored of playing happy families, and when that happens Fiz will come back to him, where she belongs. But he’s floored by what happens next. Phill announces that it’s time the girls started calling him their stepdad – and that he’s thinking of house-hunting. Has Tyrone underestimated Phill’s commitment to Fiz, Hope and Ruby? And is Phill really going to move them away from Coronation Street?

Nina struggles to cope with the anxiety and PTSD she’s been suffering from since Seb died, and she’s terrified that something bad could happen at any moment to someone she loves – particularly Asha (Tanisha Gorey).

Carla (Alison King) notices that Nina is having a difficult time, and arranges for a special Christmas present for her. It’s exactly what Nina needs and she’s overjoyed.

Meanwhile Asha does her bit to help Nina by suggesting they sync their phones so Nina will always know where she is.

And Nina surprises Asha by giving her a very personal Christmas gift.

The Platts and Barlows spend Christmas together. What could go wrong?

Sarah (Tina O’Brien) has a plan to bring both sides of her family together for a big, happy Christmas Day together.

It goes as smoothly as you would expect, with Audrey opening the wine for breakfast, Carla and Peter (Chris Gascoyne) doing a runner and David (Jack P Shepherd) in a foul mood. It all leaves Sarah in despair – but at least she has Adam (Sam Robertson). He suggests they book a posh hotel for New Year, just the two of them, and Sarah’s delighted. But maybe Adam should have thought more carefully about his choice of hotel?

David and Max (Paddy Bever) meet with the Deputy Head who says they’ll make a decision about Max’s future at the school by the end of the day. Daisy (Charlotte Jordan) urges Daniel (Rob Mallard) to use his influence to help Max – but is there anything he can do?

Not knowing about Daniel’s intervention, Max plays a trick on him by tampering with his laptop ahead of the carol concert. When Daisy tells him about Daniel’s kindness, can he rescue the situation in time?

Love for Lydia or heartbreak for Daisy?

Ken (William Roache) urges Daniel to tell Daisy how he feels, but she turns him down when he invites her for a drink. But has she made a mistake?

When Daniel and Adam join Sarah and Lydia (Rebecca Ryan) for a drink, Daniel and Lydia soon bond over a shared love of books. Meanwhile, Daisy has set off to find Daniel to tell him she’s changed her mind and she really likes him. Will she be too late?

Eileen gets a very strange present

George (Tony Maudsley) gives Eileen (Sue Cleaver) a very special Christmas present. It was all Gail (Helen Worth)’s idea, which perhaps explains it. But why is Eileen not thrilled? And will George get a second chance to impress her?

Love for Leo and Jenny?

Leo invites Jenny (Sally Ann Matthews) out for a drink, but is hurt when she refuses to commit, thinking he’s too young for her.

And when he tells her all about his New Year plans, Jenny’s more worried about the age gap than ever. Will she be spending New Year alone?