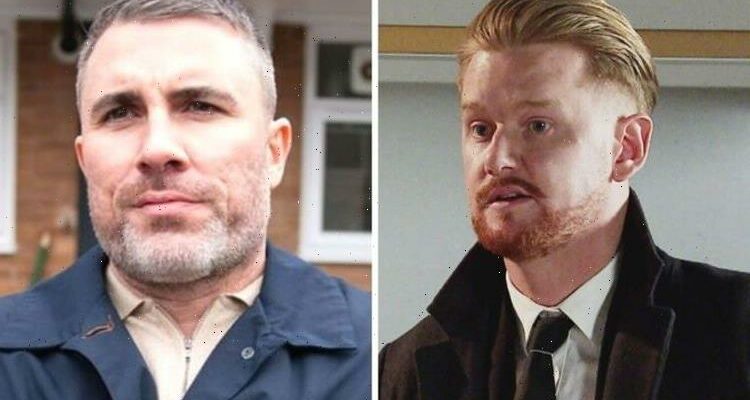 Coronation Street villain Gary Windass (played by Mikey North) killed Rick Neelan (Greg Wood) back in 2019 after being lured to the forest by the loan shark. Despite Gary lashing out in self-defence, he ended up covering up the crime and has kept it a secret ever since. However, in recent scenes, Gary was left in turmoil when Rick’s body was discovered by police. However, despite Laura Neelan (Kel Allen) taking the fall for the villain before she died, police believe that Gary is responsible for Rick’s death.

In scenes that aired last week, viewers were left in tears following the death of Laura.

Poor Kelly Neelan (Millie Gibson) sobbed at her mother’s bedside as she got to the hospital too late.

However, during Friday night’s hour-long episode, Gary ended up getting into a fight with a man who turned up at Rick’s funeral.

As they gathered at Rick’s graveside, a man approached them and spat on Rick’s coffin.

He told Kelly that he hoped loan shark Rick would rot in hell.

Gary snapped and ended up punching the man, but little did they know a photographer captured the entire moment.

“You alright?” Maria asked Gary. “You look like you’re expecting someone.”

“Yeah, I am just worried some of his cronies might turn up,” Gary replied.

However, a mystery man gatecrashed the funeral and shouted: “I always said I’d spit on your grave Ricky boy.”

Gary proceeded to push the man as he shouted: “Get out!”

“I hope your dad rots in hell, love,” the man continued before Gary punched him in the face.

As Gary dragged the man out of the church, he fumed: “Rick’s still got people doing his dirty work then even after he’s dead?”

“If I ever see your face again even you won’t recognise it after, do you hear me?” Gary threatened.

He later said to Maria: “Sorry, I thought he was going to say something.”

In scenes set to air next week, Maria is left horrified when she is shown a photo in the Gazette of the fight at Rick’s funeral.

The duo tell Gary about their findings, and he explains he will hand over the cash to Rick’s daughter Kelly.

As Kelly prepares for her mum’s funeral, Gary and Maria dread the day ahead.

However, when they return home, Gary offers to bank the £17,000 for her, but Kelly gets cagey and insists she will do it herself.

However, did the mystery man from the funeral witness the exchange of money, and more importantly, does he know about Gary’s dark secret?

Gary is clearly on edge since the money was discovered, as they could be more clues at Rick’s house that leads to him being exposed for murder.

The villain has killed before, and it might not be long before he strikes again.

Will Gary end up killing the man from the funeral to stop his secret from coming out?

Coronation Street returns on Monday at 8pm on ITV.