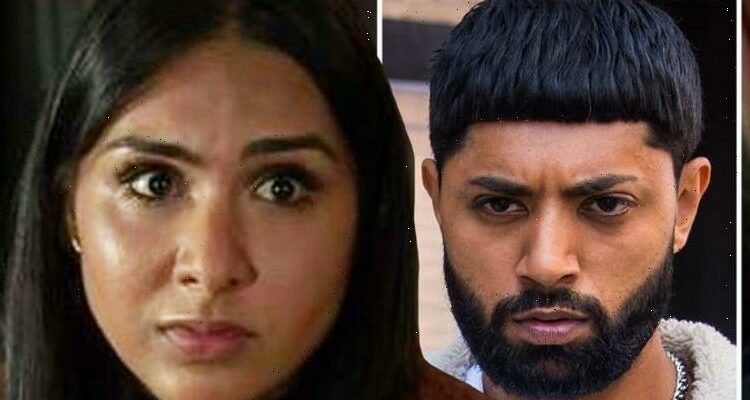 Coronation Street: Zeedan breaks up with Rana in 2016

Zeedan (played by Qasim Akhtar) was delighted to see Marrium (Kiran Landa) when she arrived in Weatherfield just before Christmas on Coronation Street. The newcomer was introduced in the wake of her father Hashim Elamin’s (Vincent Ebrahim) death as she wanted to make peace with her estranged husband, knowing the gangster had put him through quite the ordeal. However, as it seems she might be sticking around on the ITV soap, there could be an ulterior motive as to why she is staying but will she discover who really left her father to die?

The drama begins next week on the weeknight serial drama as Marrium offers to help her estranged husband redecorate Speed Daal after the fire which broke out before Christmas left it burnt to the ground.

Having not spent a lot of time with his wife over the past few months, Zeedan is pleased she wants to help him with the project.

Unfortunately, his sister Alya Nazir (Sair Khan) doesn’t feel the same way as she is hiding a deadly secret from her sister-in-law.

Just before Christmas, she and her brother let Hashim die when the villain suffered a heart attack in their front room.

Instead of calling an ambulance, they let him suffer and it was only because Ryan Connor (Ryan Prescott) walked in they decided to call the authorities.

It was ruled as an unfortunate accident but the police were sceptical of the Nazir family’s version of events as they thought something else could have happened.

Therefore, the authorities might have recruited Marrium to work undercover and get closer to her estranged husband to try and get the truth out of him.

This would explain why next week’s episodes will see the newcomer decide she might want to move up to Manchester from London.

Zeedan assures his unnerved sister Marrium will be out of their hair very soon but in later scenes, they confess their love for one another.

In Victoria Gardens, the husband and wife admit they miss each other and share a kiss, cementing their feelings.

Feeling the spark of their marriage back, Zeedan tells his wife they should give it another go as there is still something between them.

Marrium agrees they should give their marriage another chance and suggests she moves to the cobbles so they can spend more time together.

Of course, this is not what Alya would have wanted and she will be shocked to discover Hashim’s daughter is sticking around.

The young businesswoman will know it will only be a matter of time before the circumstances of the villain’s death are exposed.

This would leave her and her brother in a predicament as they could face police charges for letting Hashim die rather than help save him.

Working as an undercover police officer, Marrium might have thought Zeedan would be the one she would be able to crack.

However, unable to harbour her guilt any longer, it could be Alya who blurts out the truth to her sister-in-law about her father.

The newcomer would be pleased to have got justice for the villain and she would finally be able to reveal her undercover antics to her husband.

She could admit she has fallen out of love with Zeedan and did so many months ago but she needed to keep him on her side to get to the truth.

Will she make her exit from the cobbles as her mission is completed or will she stick around to see her husband get sent to prison?

The actor who plays Zeedan, Qasim, has spoken about his character’s wife turning up on the cobbles and what this could mean coming forward.

Qasim said: “It is interesting to meet her as he made some terrible mistakes in the marriage and cheated on her but it quickly becomes evident that he still loves her so we will see a different side to Zeedan.

“He was so hurt in his first marriage and for some reason, he then did the same thing to his second wife as Rana [Habeeb] did to him.

“So it is great to meet [Marrium] and learn more about that dynamic.

“I am intrigued to see where the story is going to go, lots more twists and turns along the way,” the soap star explained.

Taking to Twitter, viewers of the show have been sharing their thoughts on who Marrium really is and what she could do.

Andy wrote on the social media platform: “How on Earth would Zeedan cheat on Marrium? She’s super-fit #Corrie #CoronationStreet.”

Justin had a more deadly theory in mind as he posted: “Oh my God! Marrium is going to kill Zeedan #Corrie.”

Mike shared: “I don’t trust Zeedan’s wife. I think she knows exactly what happened at Speed Daal and she’s in on it #corrie.”

Coronation Street airs Mondays, Wednesdays and Fridays at 7:30pm and 8:30pm on ITV.