The 28-year-old had nothing but good things to say about her fellow judges when she was quizzed about what it's been like to work with them during a recent interview.

She confessed to The Daily Star Sunday Magazine that she was a huge fan of Matthew Morrison, 40, in hit US TV show Glee, and used to watch all the pop video's from Cheryl's former band, Girls Aloud.

Oti said: "I'm a normal girl with a normal upbringing, and I'd sit in my bedroom in South Africa studying with Glee on, and Cheryl or Alesha Dixon's video would come up.

"Then suddenly I'm working with them and it is surreal. I'd think, "I'm lying on a couch having a conversation with Matthew Morrison, this cannot be normal."

Although, despite being a big fan of Cheryl's it seems that she wasn't sure what she would be like, but was pleasantly surprised that she has found her to be "really funny and warm" while working with her on the BBC One dance show. 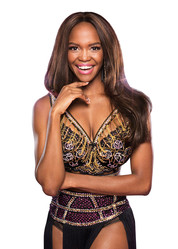 She added: "It was nice to see she's just a normal human being, I liked that."

Last month Oti shut down rumours that their was a feud going on between her and the Geordie judge, after the Sun revealed that the show had planned to sideline the 35-year-old pop star in favour of her.

She admitted during an appearance on Lorraine: "When we met I was a little bit nervous because I don't know her she doesn't know me.

"All I said was, 'If I respect her she'll probably respect me.' From the first sentence, we jelled like bluetooth, even last night, we were texting till midnight.

"So it's really nice, we're bonding."

The Greatest Dancer final airs next Saturday on BBC One.