HBO’s new miniseries, Chernobyl tells the true story of an explosion at the Chernobyl nuclear power plant in 1986. The disaster led to at least 31 deaths and the situation involved a lot of corruption to cover things up.

Some of the characters in the series are based on real people. Actors Jared Harris, Stellan Skarsgard, and more were at the Tribeca Film Festival on April 26, 2019. This is what they had to say about playing the real people behind the historical event.

Valery Legasov is a real person

The Mad Men actor is playing Valery Legasov. He was the real Soviet Union nuclear physicist who was in charge of investigating the disaster. He discovered what went wrong and the corruption around the matter.

Afterward he was also in charge of leading the report on what happened. He was met with a lot of push back and many tried to silence him.

Two years after the disaster he died from suicide on April 27, 1988. He reportedly left behind audio tapes revealing new facts about the disaster like problems with the reactors’ design. After his death, the design of similar reactors was changed. 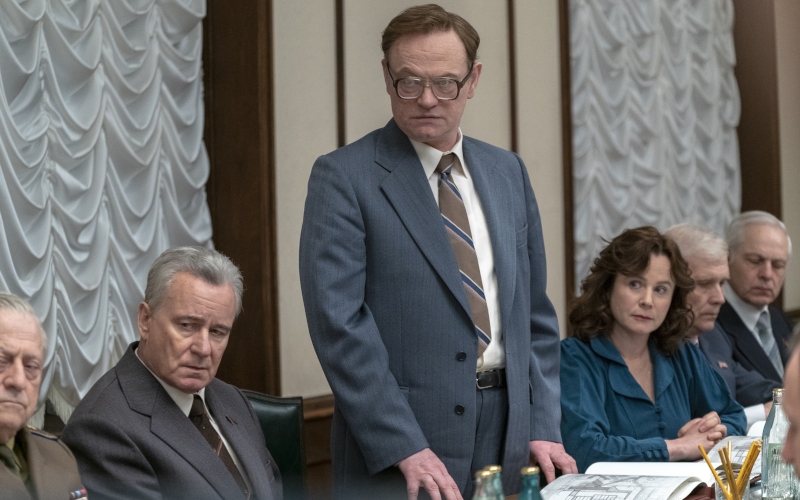 The show opens with Legasov recording himself talking about what happened at Chernobyl on audio tapes before his death. But did the actor listen to any of them to prepare for the scene?

Harris revealed to The Cheat Sheet that he didn’t listen to any audio tapes to prepare for the role for a reason. “There weren’t audio tapes,” he said. “He left behind journals. But that’s not as cinematic as audio tapes.”

He continued, “They’re very hard to get a hold of. In fact, there’s not a lot of him left in the historical record because they basically wrote him out of the story. They erased him from history. That’s what they were trying to do as a threat.” The actor said this was “to stop him from trying to get the story out.”

Harris isn’t the only actor playing a real person in the miniseries. However, another main character had a very different approach to the disaster.

There were many people who were in denial of what was happening at Chernobyl. Stellan Skarsgard plays Boris Shcherbina, who was the Deputy Prime Minister in the Soviet Union who got Legasov to investigate the disaster.

Shcherbina at first wants to downplay the situation then changes. Skarsgard talked about what it was like playing that journey.

“It’s an interesting arc to play,” the actor told The Cheat Sheet. “And it is in real life most people don’t change their minds about anything, unfortunately. But he did and that’s an important part of the story.”

Viewers will have to watch the show to see how the story unfolds.Chernobyl airs Monday nights at 9 p.m. on HBO.

Read more: ‘Chernobyl’: When Does HBO’s Miniseries About the Nuclear Disaster Premiere?