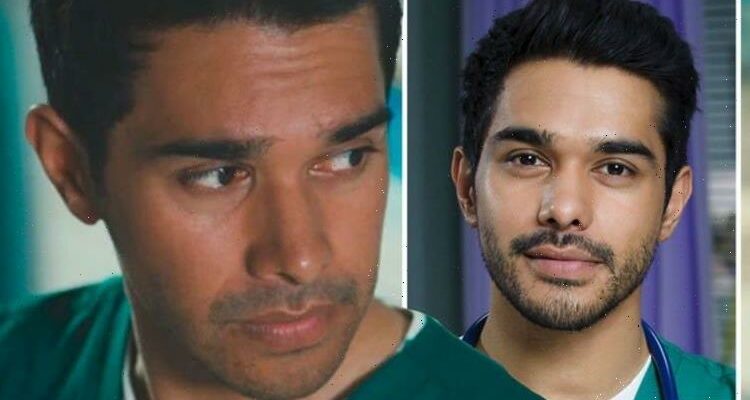 Rash (played by Neet Mohan) has exited the world of Casualty before, having left to go travelling with his partner, Gemma Dean (Rebecca Ryan) on the television show. However, it was only a few months before he was back at the Holby City hospital following the death of his mother and instead of going back out on his travels, he decided to stay and worked on the front line during the coronavirus pandemic. The character hasn’t had a big storyline for a while but BBC bosses have put him front and centre of an action-packed plot and in Saturday night’s episode, he could end up dead.

The drama begins as the sister of his late friend Sam, Hafsa (Zainab Hasan), knocks at his door having been reunited a couple of weeks ago after not seeing each other for years.

In a previous episode, she explained to her brother’s friend she was a youth worker helping young people get off the streets and find good homes.

There was a glimpse of her character which wasn’t very nice but in Saturday’s episode, it becomes clear what she’s been hiding.

She will ask the A & E doctor to take care of a child called Rayan who is troubled and needs a place to stay whilst she works to find him a good home.

Unable to turn Sam’s sister down, Rash agrees and he is soon bonding with the youngster and their mutual passion for games.

When Rash starts his shift, however, Rayan goes off to meet Hafsa and it is revealed she is part of a dangerous gang.

As the pair get to speaking, someone runs up to Rayan and stabs him in the back and it is up to Sam’s sister to get him back to Rash’s place.

The doctor immediately informs his friend’s sister they need to take the injured party to the Emergency Department to be cared for.

Once he gets the youngster into A & E, Rash makes up a story he found the Rayan in the street with knife wound injuries.

It’s not long before the beloved character realties Hafsa knows more than she is letting on and is part of a terrifying gang.

Rash’s in so deep

Believing there is still some good inside Hafsa, Rash agrees to help her with whatever she needs but he may come to regret his decision.

When the doctor leaves her, the gang member pulls out her phone from her pocket and informs an unknown character they have a doctor on their side.

Knowing Rash will do anything she wants, Hafsa believes she has forged the perfect plan to make the beloved character her puppet.

Unfortunately, this could be the beginning of the end for Rash as he is dragged into an incredibly murky world he cannot get out of.

With the odds against him and his position in the hospital compromised, he could try his best to leave but end up making a big mistake.

Suffering the same fate as Rayan, the doctor could be attacked by the gang members and left for dead as he faces their wrath.

As help doesn’t reach him in enough time, the beloved character could sadly pass away, with his colleagues finding him when it’s too late.

This would bring an end to his four-year stint on the show in the most heartbreaking of circumstances and his loss would be felt by all those he worked with.

The actor who plays Rash, Neet, has spoken out about his character’s latest storylines and the horrors to come for him.

He said: “His work life is very busy but personally, he is lonely. We meet him at a time where that loneliness is met with this old person from his past, who tells him about this friend Rash had.

“His life has gone in a very different direction in comparison to where some of his friends’ lives have gone.

“The isolation he’s in plays into the upcoming episodes, he’s getting further involved in these people where actually, the trust with his colleagues, Rash could’ve found an opportunity to speak out and work around things, but he doesn’t and finds himself in a lonely situation.

“Soon, he’ll find he’s in so deep he has to play along to it. Even though he’s done what he’s done out of good and sincere attention, the implication of what he’s done, he hasn’t thought through,” he told Metro.co.uk.

Unfortunately, there will be a turn in the storyline and Neet has promised his character will never be the same again.

Is this because he faces his demise?

Casualty airs tonight at 9:30pm on BBC One.