In 2007, the “Transformers” cinematic universe was launched by Michael Bay, and while the first film of the franchise made a whole lot of money, it was a surprise how bad it was. After all, if there’s one thing America’s greatest auteur of explosions should have been good at doing, it was directing a movie where giant robots fight each other. Instead, the action sequences of that film were pretty much incomprehensible nonsense, and the following “Transformers” films have only ever gotten more convoluted.

Thus, it is nice to report that in the new spin-off/prequel film “Bumblebee,” there are many scenes where giant robots fight each other, and in those scenes, you can actually see what’s happening. The Autobots and Decepticons toss each other around with slick judo-like moves and blast each other with abandon, and the cinematography and editing hold still long enough to let you enjoy each moment.

“Bumblebee” begins with a legitimately thrilling battle on Cybertron — the first of many scenes which prove that director Travis Knight knows how to direct a coherent action sequence, and also includes a ton of eye candy for long-time fans of the franchise. The Autobots find themselves on the losing side and strategically retreat, and thus our new best friend Bumblebee finds himself on 1987 Earth alone, unable to speak, and memory-less.

Enter Charlie (Hailee Steinfeld), a music fan and auto repair enthusiast who is just about to turn 18, misses her dead dad dearly, and wants a car. Thanks to her local junk shop, she manages just that, but ends up with a surprise: that crappy-looking VW Bug is an alien robot!

What “Bumblebee” does best is remember that this is a franchise for the young, and embrace that fact without any shame while also still delivering on the action. There’s no self-importance, no grafting of ultra-patriotism and too-dense mythology onto what should be a simple narrative. If you come to “Bumblebee” hoping for a heartwarming love story about a girl and an alien robot who can disguise himself as a VW Bug… well, that’s exactly what you’ll get.

Steven Spielberg has been a producer on the “Transformer” movies from the beginning, but “Bumblebee” is the first film which actually proves it, because many of the film’s most enjoyable sequences come from Charlie and Bumblebee developing their relationship, her hiding his presence from the outside world while he ends up helping her open up to the world.

It’s tough to define the bond between Charlie and Bumblebee, the latter of whom is technically a sentient individual who can kick serious ass (in the film’s prologue, he’s voiced by Dylan O’Brien). But they almost have a master/pet relationship, with Bumblebee acting more like an oversized misbehaving puppy — multiple sequences of “Bumblebee” lean into the comedic value of a non-speaking big fella causing destruction.

This is confused at times by moments when Bumblebee leans into a best friend role, despite his inability to speak; at times there’s a King Kong dynamic in play, especially when the government (personified by John Cena as a military officer whose initial introduction to the world of Transformers left him scarred) tries to take him down. “Bumblebee” never really settles on what it wants the relationship to be — though the fact that there is a relationship at all, one that is the focus of the film, makes it easy to connect emotionally with the action. To care about what happens to a girl and her giant robot should always be the goal, and here Knight and writer Christina Hodson more than achieve it.

While “Bumblebee” excels at finding the human element in a conflict about giant robots, its greatest flaw is its pacing, with some sagging in the middle largely tied to Charlie’s emotional journey, with a few beats played out for far too long. The film’s Chekhov’s gun is her past life as a championship high diver, and the way it’s looped into the narrative gets delivered with a hammer-over-the-head level of pain.

That said, Steinfeld sparkles; the 21-year-old pop star and “True Grit” actress is both an empathic force as well as a damn action hero — she’s Fay Wray with agency, working alongside Bumblebee to save the day in her punk rock t-shirts and ripped jeans.

As for the supporting cast, Pamela Adlon doesn’t deviate too much from the role she plays on FX’s “Better Things,” but given that Sam Fox is one of television’s most delightfully sardonic and witty mothers, that’s very much to the film’s benefit. Plus, it is no longer shocking to report that Cena is a solid comedic actor, but while the film doesn’t lean into his talents beyond his initial introduction, he does his best to get a laugh out of nearly every line he says as the government agent trying to hunt down Bumblebee, and more often than not succeeds. 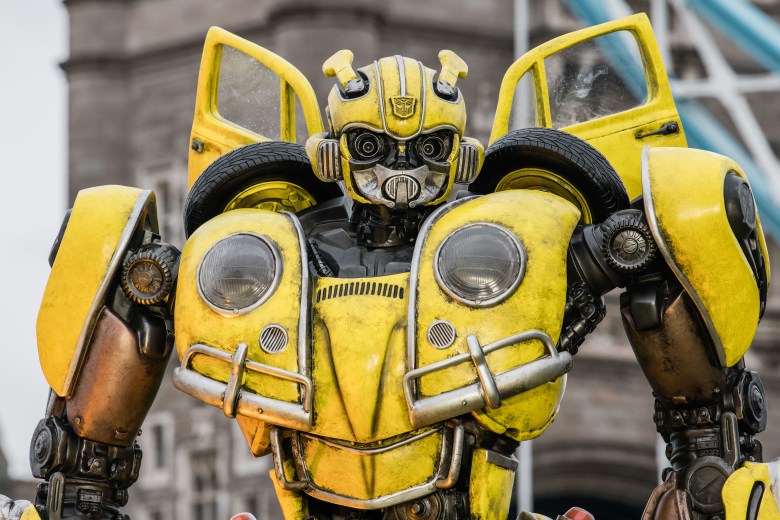 The voice cast includes Peter Cullen once again reprising his iconic work as Optimus Prime, as well as Angela Bassett and Justin Theroux as the two Decepticons who come to Earth to hunt down Bumblebee. Bassett, in particular, seems to be having the time of her life in the role of villain, manipulating the humans to do her bidding with an ease that makes sense, because it’s Angela Bassett, after all.

Bumblebee, as expected, draws a lot of focus here, and you have to give points to the character design for a face that improves upon past live-action iterations for one of cinema’s most emotional and expressive robot faces. Charlie almost immediately forms a connection with the wordless Autobot, but it’s easy to understand why, especially in their initial introduction, as he cowers with terror, like a lost dog who just wants to hear a comforting word.

The film’s setting in 1987 proves not at all restrictive when it comes to the music Bumblebee uses to communicate — in fact, it adds a timeless quality, as the songs picked lack any sort of gimmick factor (with perhaps the exception of a Rick Astley gag, but hey, Rickrolling has lasted this many years so far, and also, “Never Gonna Give You Up” is actually kind of a banger). There’s a joyful use of Steve Winwood’s “Higher Love” that notes consideration, as well as an ongoing debate about whether or not the Smiths are good. And “The Breakfast Club” proves its pop culture immortality with yet another invocation — “Bumblebee” only ever uses less than a minute of the film, but it does so repeatedly and as the punctuation of key moments.

The period setting is important in terms of maintaining the continuity of the “Transformers” universe, but it does also mean a reminder of this: if you were a young woman growing up in this era, you had nothing resembling the kind of female heroes we now see regularly today in genre films. In the ’80s, only guys were starship captains and ladies never got to use lightsabers. Fans of the classic “Transformers” will be thrilled by many of the touches here. But there is also now an entire generation of kids who are going to get to watch a girl drive, with a smile on her face.