Two new episodes of Brooklyn Nine-Nine aired on NBC on Aug. 19. In the second episode of the night, “Balancing,” Jake Peralta (Andy Samberg) and Amy Santiago (Melissa Fumero) find themselves torn between their jobs and parenting their son, Mac. 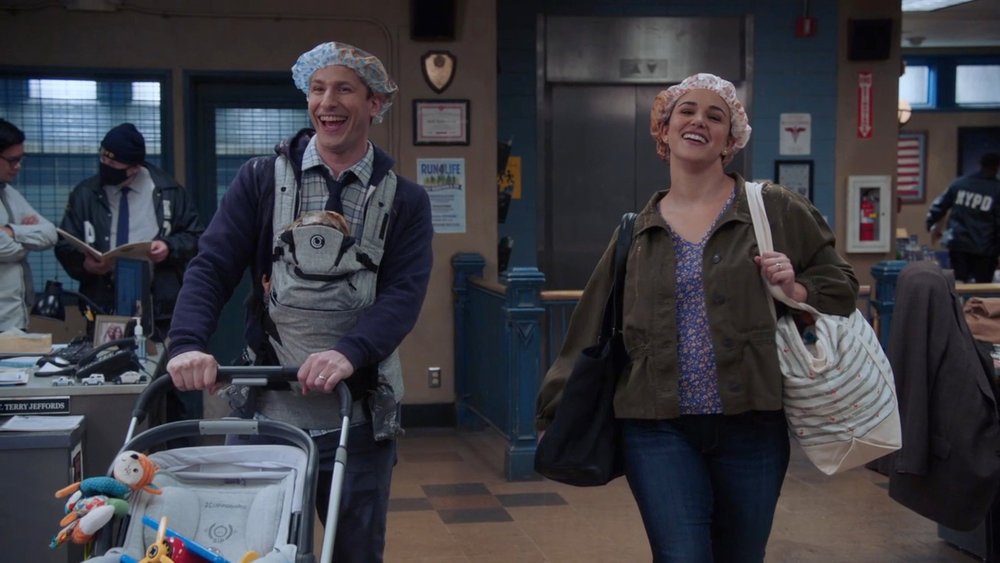 In the Brooklyn Nine-Nine episode’s cold open, Jake becomes convinced that Johnny Franzia, a serial killer, has resurfaced. Franzia has been referenced multiple times throughout the series, and Jake is determined to catch him once and for all.

To Jake’s dismay, Captain Raymond Holt (Andre Braugher) takes Jake off the case because Jake and Amy previously requested to have their hours reduced so they can focus on parenting. Amy and Jake insist they can handle their jobs, so Holt puts Jake back on the Franzia case.

Meanwhile, Holt begins crashing at Rosa’s (Stephanie Beatriz) apartment as he is still separated from his husband, Kevin (Marc Evan Jackson). Holt admits that couples counseling has not helped, and as he begins to complain about Kevin, Rosa realizes Holt may in fact be a loud roommate.

Jake and Amy struggle with balancing their jobs and parenting

At first, Jake and Amy excel at their balancing act. Jake finds proof that Franzia has returned, while Amy prepares a proposal for using fewer uniformed officers on the street. Their plans are derailed when Mac’s daycare closes due to a lice outbreak.

Amy and Jake realize they have lice as well, and Jake remembers an old home remedy that kills lice involves keeping maple syrup in one’s hair for days. They arrive at work with Mac in tow while wearing shower caps to keep the maple syrup in place. Because Jake and Amy have to split parenting duties, Charles has to do most of the work on the Franzia case.

At Rosa’s, Holt drives Rosa crazy with how much he talks about Kevin. She suggests they get drunk to see if that helps Holt forget the pain he is in. It works temporarily until Holt realizes he emailed an NSFW photo to Kevin. Rosa comes up with the idea to delete the email from Kevin’s computer before he sees it.

Jake and Amy both make sacrifices in ‘Brooklyn Nine-Nine’

While Holt successfully deletes the email from Kevin’s laptop, Kevin catches Rosa and Holt in the house. The two come up with a lie as to why they were there, disappointing Kevin. Rosa points out that Kevin seemed to want to spend time with Holt, so Holt texts Kevin.

Jake and Charles have a breakthrough in the Franzia case, but Amy cannot watch Mac. Jake decides to let Charles handle the case so Amy can give her presentation. Charles solves the case, and while Jake is disappointed he missed it, he is able to watch Mac pull himself up for the first time.

Amy returns home and reveals the presentation was a success, but she admits she hates she missed spending time with Mac. Jake and Amy realize being working parents will be more challenging than they anticipated.