Daniel Stiepleman was sitting at his Uncle Martin’s funeral in 2010, when he heard a eulogy that sparked a screenplay. The story had to do with a case that his uncle, a tax lawyer, tried with his wife, who happened to be Ruth Bader Ginsburg.

It was the only case the couple worked together, and it encapsulated, Stiepleman thought, so much about the era and their marriage: the discrimination that women faced; the path his aunt blazed, as she won cases to counter that discrimination even before she became a Supreme Court justice; and the unusually equal partnership she had with Martin Ginsburg, in the courtroom and at home.

In 2011, Stiepleman, a fledgling screenwriter, called his aunt — who was not yet the pop culture phenom known as Notorious RBG — to pitch her on doing a movie about her life. “I said, I have this idea, I would love your permission and I would really love your help,” he recalled. “And there was this pause and she said, ‘Well, if that’s how you think you’d like to spend your time.’”

In the seven years between that call and the new film, “On the Basis of Sex,” the production became another point of connection for the extended Ginsburg clan. Even for a biopic, this one is unusually family-oriented: It traces Justice Ginsburg’s extraordinary relationships as much as her unparalleled career.

She opened her files in the Library of Congress to her nephew, who found inspiration in the snarky comments she made in the margins of briefs. She reviewed several drafts of the script, as did her daughter, Jane C. Ginsburg, whose childhood and teenage years are depicted onscreen. Jane’s son, Paul Spera, an actor, has a small part. And Stiepleman, whose mother, Claire, and Martin Ginsburg were siblings, is also an executive producer, “which basically means I’m the Ruth-whisperer,” he said.

Their closeness, which blossomed during filmmaking, was imperative. “There wasn’t going to be a movie, at least not by him, if my mother wasn’t comfortable with it,” Jane Ginsburg said.

Having so many family members participate, and the approval of the justice herself — she even makes a cameo — gave the movie an air of indispensable authenticity, said Mimi Leder, the director. Ginsburg reviewed the script as if it were a contract. “Like any good lawyer, she doesn’t leave any detail untrammeled,” said Felicity Jones, who plays her.

The objections started with the very first line, which described young Ruth wearing heels to her orientation at Harvard Law School; she wore flats, she explained to her nephew, because she walked to campus. He persuaded her to let the fancier footwear stay — just about the only argument he won.

Beyond giving Jones’s casting her blessing, it was also “very important to her who played Marty,” Leder said.

He was tall, fair-haired in his youth with a chiseled jawline, a charismatic storyteller who never missed a punch line. Armie Hammer fit the bill. When the stars went to Justice Ginsburg’s chambers to meet her, “she couldn’t take her eyes off Armie,” Jones said.

To get her portrayal right, Jones, the British actress and star of “Rogue One: A Star Wars Story,” studied audiotapes from Ginsburg’s early lawsuits, divining that her Brooklyn accent became more pronounced as she grew more impassioned. They spent time together at the justice’s home, where, Jones said, “she very proudly showed me her incredibly tidy desk,” which is near her bed. (She still keeps a night owl’s working hours, with phone meetings about the script starting at 11 p.m., after she’d finished her typically long day at court.)

Being in her orbit emboldened Jones. “Every time I sort of feel overwhelmed by something, I constantly come back to her,” she said. “I think, how would she have dealt with this situation and navigated it? After playing Ruth, I realized how important it is to have a voice in the world and to express that. If she wasn’t scared to do it, I shouldn’t be.” 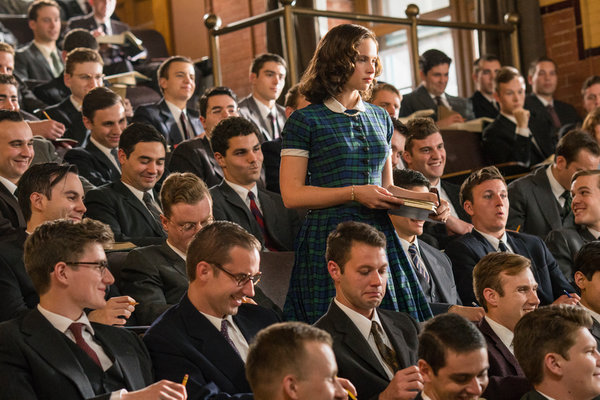 The film is an origin story, revealing how a young mother went from one of the few women in her class at Harvard to an architect of the laws that overturned gender discrimination (no more bias “on the basis of sex”). The 1970s case that the Ginsburgs fought together, Moritz v. Commissioner of Internal Revenue — which Martin brought to his wife, then a law professor — was the first time she delivered oral arguments in court. In a real-life twist that was, Stiepleman said, “a gift from the screenplay gods,” the opposing counsel was overseen by the couple’s former Harvard Law dean, who had been less than kind to his female students, asking them what qualified them to take the place of men.

Of course, the story was also Hollywoodized. That pivotal moment when Ruth freezes in court and cedes the floor to her husband? “There’s not a shred of truth to that,” her daughter said, a point the justice has also made. “I didn’t stumble,” she said in a recent Q. and A. after a screening in Manhattan, where the audience included Gloria Steinem and Hillary Clinton.

The mid-December event was held before Ginsburg had surgery to remove cancerous nodules from her lungs. But her health was still a fresh concern, since she broke three ribs last month. In a conversation with the NPR correspondent Nina Totenberg, she assured the crowd she was feeling “better each week” and was back to her regular, strenuous workouts with her trainer. “Even planks,” she said.

If she didn’t seek out the biopic, she seemed to appreciate it. “The film is part fact, part imaginative,” she said that night. “But what’s wonderful about it is that the imaginative parts fit in with the story so well.” (In lieu of interviews, Ginsburg participated in several Q. and A.s.)

Some of the legal groundwork may be familiar, thanks to the wildly popular documentary “RBG,” released in May. (Among her many firsts, Ginsburg is the only sitting Supreme Court justice to be the subject of two films in the same year.) But the revelation of the feature is in its focus on her home life: her terrible cooking, devoted mothering and spats with the teenage Jane, as well as the way in which Martin Ginsburg stepped up as parent and household co-leader.

Stiepleman viewed his uncle as an exemplary husband and father, a role model, and hoped to convey that onscreen. “It was that dynamic of two people my age, trying to figure out how to live at home what they’re also fighting for in court, which is true equality,” he said.

“This movie is as much about their love story as about how change happens,” Leder said.

For the Ginsburg family, seeing their life recreated onscreen, detailed down to the jewelry Ruth Bader Ginsburg wore when she argued before the Supreme Court, was surreal, “a step out of reality,” Jane Ginsburg said.

The movie presents the teenage Jane as brash and opinionated (a characterization also based in part on Jane’s daughter, Clara Spera, Stiepleman said). And though in real life, the young Jane was politically and socially engaged, with a consciousness-raising group and an internship at Ms. magazine, she does not believe she led her mother into a more forcefully feminist outlook, as the film suggests. “I think my mother had a much greater tolerance for poetic license than I did,” she said.

The future justice was a stickler when her daughter was growing up, though. A skilled editor, “she made me rewrite every English paper multiple times,” Jane Ginsburg recalled. “That kind of paid off the other way round, when she would give me the drafts of her briefs, and I got to read them and make editing suggestions.” A Harvard Law graduate, Jane Ginsburg is now a professor of literary and artistic property law at Columbia University. (Her brother, James, runs a classical music label in Chicago. Clara Spera, another Harvard Law alumna, is a federal law clerk in New York.)

To anyone who was around the Ginsburgs, their unusual parity was obvious. But to financiers and development executives, the character of Martin Ginsburg as a supportive husband was far-fetched. Backers offered to fund the film if he was rewritten as angrier, or less understanding; maybe he should threaten to divorce his wife, if she didn’t drop the case.

“It came up a lot,” Stiepleman said. “I remember at some point saying in a meeting, There’s a 5,000-year history of narrative, of men coming home from battle, and their wives patch them up and boost their egos and send them back out to fight again. You write one supportive husband, and everyone’s like, such a creature could never exist!”

For Hammer, the chance to play second fiddle was rare, and welcome. “I’m sure that women feel like they’ve been stuck in these supportive roles for a long time, but for me, to get to play something like this was amazing, because it’s fair,” he said. “And I think that there is a lot to be gained from seeing that a man can be an even better and stronger man, while still being an incredibly supportive husband and a buttress for his wife. It didn’t make him any less of a man. If anything, it made him more.”

Representing that dynamic may be one reason Justice Ginsburg gave the film her greenlight. “My mother strongly believes there won’t be true equality until men take full participation in child care and other household tasks,” her daughter said. The justice’s chambers are decorated with photos of her son-in-law gazing at his infant son, and now her grandson gazing at her great-granddaughter.

She also wanted the practice of law to be depicted accurately. It was a reverence Stiepleman couldn’t miss: for Hanukkah, “every year from the ages of 5 to 12, she gave me a copy of the U.S. Constitution,” he said. (As a child he was mystified by the gift; as a teenager, inspired. Only as an adult did he realize the likely truth: “I was like, oh, of course, she has a discount at the Supreme Court gift shop. And she’s reeeally busy.”)

Her other big note, he said, was that she didn’t want moviegoers to think that she alone shattered legal barriers, “as if it had never occurred to anyone else that women should be considered equal.”

“She said, ‘I built my career on the shoulders of women who came before me, like Dorothy Kenyon, like Pauli Murray, and people should know that,’” Stiepleman added. He wrote Kenyon, the pioneering feminist social activist and lawyer, into the script.

The original story ended differently, but (spoiler alert) Leder wanted to close on an image of the real Justice Ginsburg. Her cameo was set for the last day of filming; the justice picked her own costume, a sapphire-blue coat and dress, which she kept afterward. Starting on the steps of the Supreme Court, they did two takes, and then, Leder recalled, she asked the justice if she could do another. The reply, in a stern voice: “Just one more.”

The moment, as an 85-year-old woman ascends into her future, brings audiences to tears.

Justice Ginsburg was not immune. At a friends-and-family showing, she and Claire Stiepleman, her sister-in-law, held hands from the moment their Marty appeared onscreen, her nephew said.

“I always thought she was just doing me a favor,” letting me tell her story, he added. “But then right after she saw the movie, she gave me a hug and she said, ‘Thank you.’ And it never occurred to me, until that moment, that it was something we had done for each other.”