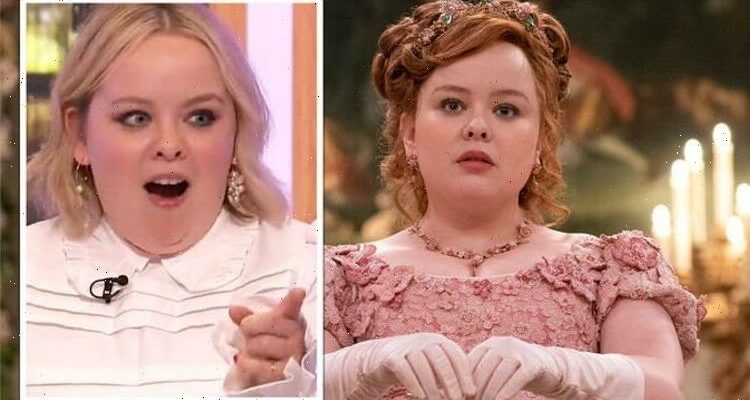 Nicola Coughlan told her friends she was Lady Whistledown

The Irish actress, who portrays Penelope Featherington in Bridgerton, was invited onto Tuesday’s instalment of The One Show to discuss the highly-anticipated second season of the period drama returning to Netflix. Fans will recall Penelope was revealed as Lady Whistledown at the end of the first season, however, Nicola has admitted she “ruined” the ending for her loved ones.

Bridgerton became a worldwide phenomenon when it landed on Netflix in 2020.

A total of 82 million households watched the first series in the space of a month.

Fans have been eagerly awaiting the release of season two which is set to drop on the screening giant on March 25.

Nicola joined The One Show hosts Lauren Laverne and Jermaine Jenas on Tuesday evening to reflect on the first series and drop hints about the second.

Lauren began by telling Nicola Bridgerton “has got it all” before discussing her character Penelope’s huge reveal at the end of the first series.

“So your character was unmasked at the end of the last series as the mysterious Lady Whistedown,” Lauren said.

“It must have been hard to keep it a secret.”

Nicola smile at the hosts and quipped: “Well the good thing is that I didn’t.

“I just told all my friends and family and they were all fuming with me and they said it really ruined the ending.

“But I mean if you are sharing a role with Julie Andrews that’s quite hard to keep that, but I have been much better this series and not telling them stuff.

Excited by the new season and what is to come, Jermaine added: “Well, we all know who you are, Lady Whistledown.

“But is anybody else, I know that your friend Eloise [Bridgerton] (Claudia Jessie) was getting really close to finding out it was you?”

Hinting at her character’s downfall, Nicola teased: “It gets quite hairy for her this time around, and you sort of see behind the curtain and see how she is getting away with it.

“She has this sort of alter ego, shall we say that she used to get away with things, so it was so fun, and I always say that it is like her drag queen persona.

“Lady Whistledown, she gets to pretend to be someone else, so yeah, it was so much fun.”

Lady Whistledown is the pseudonym of Penelope, who is best friends with Eloise Bridgerton and enjoys stirring up drama.

In the first series, her gossip column was the constant talk of Bridgerton’s high society in Regency Era London.

How will she feel if she discovers her dear friend Penelope is the gossip columnist in season two?

Bridgerton’s first season is available to stream on Netflix, with season two available to watch from March 25.