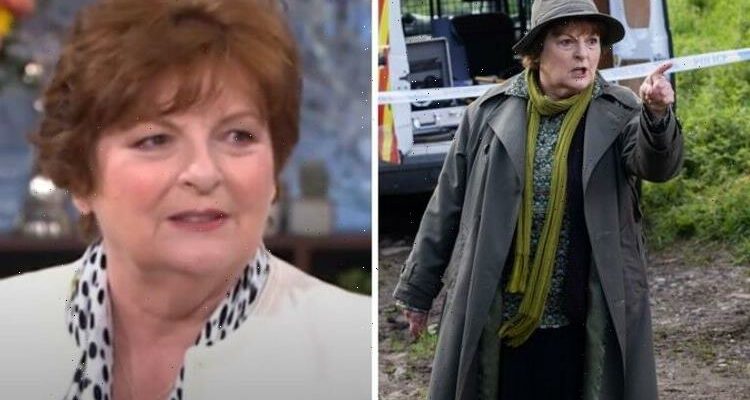 Brenda Blethyn says her shoes help her get into character

Brenda Blethyn has played DCI Vera Stanhope since the ITV series began in 2011, and she has become a hit with fans ever since. Joe Ashworth (played by David Leon) was DCI Stanhope’s original sidekick before he was replaced by Aiden Healy (Kenny Doughty) in 2014. Brenda’s character is famous for wearing her signature green hat and coat, but according to Brenda, it is the shoes that help her to get into character.

During a recent appearance on This Morning, Brenda appeared alongside her Kate and Koji co-star Okorie Chukwu where they discussed the latest series with Phillip Schofield and Holly Willoughby.

While they chatted about what filming for series two has been like, the actress also gave ITV viewers an update on the latest series of Vera.

The 76-year-old confirmed filming for series 12 had already begun.

However, she admitted she was unsure when the final episodes of series 11 would air.

“We’ve got two more episodes of the current series of Vera,” Holly began as she held up a DVD of the show.

“We’ve got episodes one, two, three and four,” the host continued as Brenda replied: “Yes, they are out now.

“There will be another one with five and six at some point.”

“Are you still loving it?” Phillip asked as the actress replied: “Yeah, yeah, it is great.”

She added: “I love the North East and the people are just fabulous up there and the crew are very loyal and the cast are all the same.”

“Do you put the hat and the mack on and think, ‘There she is’?” Phillip asked.

“Boots,” Brenda replied as a shocked Holly asked: “Is it?”

The actress replied: “Everything I do, it starts with the shoes.”

Phillip proceeded to ask what her character Kate wears in ITV series Kate and Koji.

“It’s boots,” Brenda added. “[For] the practicality, they are little bootlets actually but they’re flat, she’s on her feet all day long.”

Series 11 of Vera was put on hold due to the coronavirus pandemic, meaning TV bosses had to spread out when the episodes would be broadcast.

Four instalments of series 11 have already been shown, but fans are eagerly waiting to watch the final two episodes.

Because of social distancing, cast members had to form bubbles between them so they could film closely together.

Brenda formed a bubble with Kenny, while Ibinabo Jack, who plays Jac Williams, and Riley Jones, who plays Mark Edwards, formed another bubble.

In a recent interview, the Mark Edwards star admitted they had to use camera trickery to get around filming the group scenes.

This Morning airs weekdays at 10am on ITV and Vera is expected to air later this year.