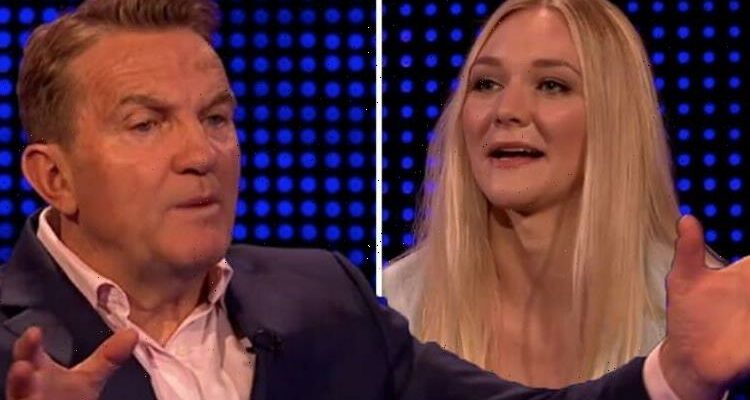 The Chase: Bradley says he was ‘terrified’ at cashbuilder

Sally was the third player to take on Chaser Paul Sinha on Friday after answering a series of general knowledge questions asked by Bradley Walsh. However, the contestant’s performance in her cash builder round left The Chase presenter “petrified” after getting off to a shaky start.

Dan kicked off proceedings but failed to beat the Chaser and progress to the final.

Greg was the first contestant to add some money into the jackpot prize fund after securing the £6,000 he had earned.

Sally was eager to get started but her cash builder round gave cause for concern.

Introducing herself, Sally surprised Bradley by revealing her job as a violinist.

Read more: The Chase’s Darragh Ennis hits out after mistake ‘Not that way!’

“I play the electric violin at parties and events,” she clarified. “I’ve been playing since I was three and I’ve been professional for nine years.”

Sally admitted she wanted to put any potential winnings towards building a recording studio or attending Eurovision.

During her cash builder round, Sally answered four questions in a row incorrectly.

Out of those four questions, the contestant passed on three of them making for a worrying start.

However, after answering one question correctly, Sally got into the swing of things.

For the next six questions, Sally passed just one and answered the other five correctly.

After her cash builder round, Bradley commented: “Okay Sally I’ve got to tell you this.”

“I was petrified at the start,” he said and Sally agreed: “Me too.”

“I was petrified that you were really going to spiral into oblivion,” Bradley quipped.

Sally remarked: “I clawed it back,” and the host noted: “You really did, terrific performance.”

The Chaser added: “Sally that was a disastrous start and it turned out very respectable.”

Sally’s teammate Lisa encouraged the contestant to stick with the money she’d earned while commenting on her cash builder performance.

She said: “Sally that was a rocky start but you got there in the end though!”

The contestant went on to secure her place in the final but Lisa wasn’t as lucky.

Greg and Sally worked well together in the final but were ultimately beaten by Paul.

The Chase airs on ITV on weekdays at 5pm.