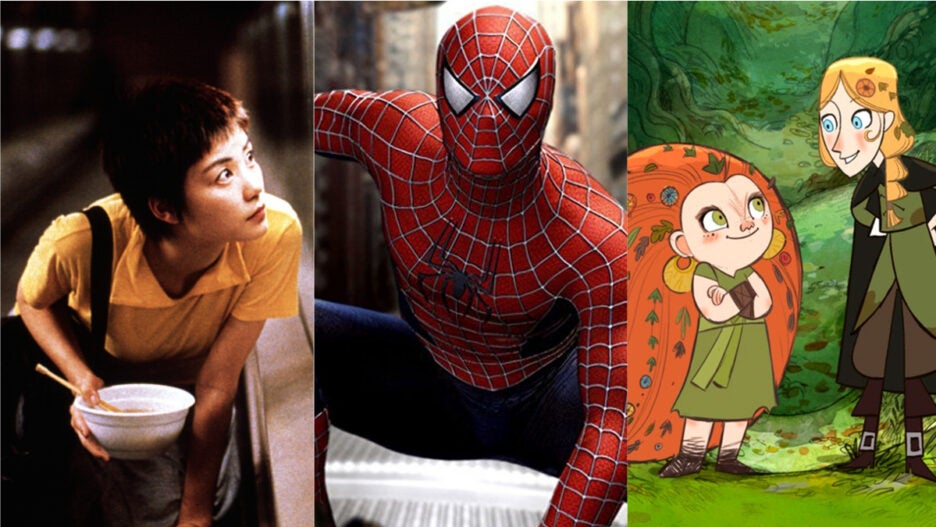 The extended holiday break makes for the perfect time to sit back and binge.

And thankfully there are a ton of really great box sets, both for television shows and movies, that have been released this past year. These box sets will take you to far away worlds, allowing you to mingle with some of your favorite characters, and, thanks to the abundance of special features, see how they were put together. If you have a film fanatic or a TV junkie in your life, these would make for the perfect holiday gift.

Cartoon Saloon, a small outfit out of Dublin, has quietly produced some of the best animated features anywhere. And this new box set combines three of the very best films the studio has to offer – the so-called Irish Folktale Trilogy (or “Celtic Trilogy”), consisting of 2009’s “The Secret of Kells,” 2014’s “Song of the Sea” and last year’s go-for-broke masterpiece “Wolfwalkers” (which premiered on Apple TV+, making this its physical media debut). All three films were nominated for the Best Animated Feature Oscar, and all three are overstuffed with a charm and distinctive art style all their own. Speaking of overstuffed, this new box set comes with a 40-page book featuring essays and concept art, a folded mini-poster, interviews and early animatic versions of each movie featuring audio commentary. (Shout included this version of the Laika movies in a recent release, and it really is incredible to watch the movies in such early form.) This is a box set worth treasuring.

If there’s a “Lord of the Rings” fan in your life, the newly released Middle-Earth box set is a swell gift. This includes all three “Lord of the Rings” and all three “The Hobbit” movies on 4K, Blu-ray and Digital, including the theatrical and extended versions of each film, all packaged in a gorgeous wrapping.

However there is one big caveat here – for whatever reason, this box set does not include any of the extra bonus features that made the DVD versions of these films (particularly the Extended Editions) collector’s items, namely the Appendices. So this 31-disc collection is more for the fan who wants the updated versions of these films (i.e. 4K) and either doesn’t care about the in-depth bonus features, or already has the DVDs.

Earlier this year, Zack Snyder’s version of the maligned 2017 superhero team-up movie “Justice League” was finally released on HBO Max. A singular, nearly visionary, 4-hour epic, it is now out on 4K Blu-ray, which is by far the most impressive way to watch the film. (Not included: the black-and-white “justice is grey” edition you can also stream on HBO Max.) Snyder’s magnum opus is bundled here with his earlier DC forays – 2013’s Superman retelling “Man of Steel” and 2016’s muddier “Batman v. Superman: Dawn of Justice” (thankfully the more ambitious, more tonally consistent 182-minute long, R-rated version of “Batman v. Superman” is included here). If you are a fan of Snyder’s distinct vision of god-like heroes and oversized visuals, then this is the box set for you.

In this thoroughly deluxe box set (released by Criterion this spring), you get seven Wong Kar Wai films – 1988’s “As Tears Go By,” 1990’s “Days of Being Wild,” 1994’s breakthrough “Chungking Express,” 1995’s “Fallen Angels,” 1997’s “Happy Together,” 2000’s “In the Mood for Love” and 2004’s “2046.” (My kingdom for the international cut of “The Grandmaster,” although undoubtedly the Weinstein Company of it all has screwed things up irrevocably.) While the set has sustained a bit of controversy, thanks to WKW fiddling with some of the sound/picture specifics, they’re his movies to fiddle with, and this lush, features-laden set is perfect for fans of the filmmaker or those looking to be exposed to some of the most vibrant movies of a generation.

Hideaki Anno’s anime masterpiece, which is every bit as much about awkwardly growing up as it is about giant robots battling bizarre alien creatures called “Angels,” is finally on home video in the West in a fairly complete-ish version. The Shout! Factory collection contains all 26 episodes of the original series, along with the “Death (True)²” and “The End of Evangelion” movies (there were subsequent movies but the lore surrounding them is too much to currently unpack). Somewhat controversially, the original dubs and subtitle translations were only available on more expensive (and now sold out) box sets, with the current edition only having the newly formulated subtitles and dub tracks from the recent Netflix release. Also, this set is without the version of “Fly Me to the Moon” that played over the closing credits, presumably due to rights/licensing issues. Still, we should feel lucky to finally have a set as extensive (and as beautiful-looking) as this one in the West.

With “Spider-Man: No Way Home,” the latest of the MCU-connected Spider-Man films, opening this Christmas, it might be time to look back at the original Sam Raimi trilogy. (Not that any actors from that franchise will appear in the new film. No, not that at all.) When Raimi’s first “Spider-Man” hit theaters in 2002, it was unlike anything people had seen before, combining the aw-shucks earnestness of Richard Donner’s “Superman” with cutting edge technology and Raimi’s skewered point of view. The sequel went even further and has been called the greatest superhero movie ever made, while the third film is an interesting oddity and at the very least has more offbeat character than most mainstream superhero fare.

This new Blu-ray box set (if you want to hold out, the 4K Blu-ray set comes out early next year) has multiple versions of the second movie, with all three boasting plentiful special features. This box set will send you back into the classic, streamlined Spider-Verse, one that is still hard to beat. THWIP!

“Future Boy Conan,” released here for the first time in the West, is remarkable for a number of reasons. For one, it was the directorial debut of Hayao Miyazaki, a man who would forever change the shape of modern animation (Isao Takahata, a co-founder of Studio Ghibli and a stunning filmmaker in his own right, also worked on the series). The story, about a boy who grows up on an island following a cataclysmic war (using magnets, of all things), is also hugely inspiring. Watching the 26 episodes, you can clearly draw parallels between it and this summer’s Pixar classic “Luca” (director Enrico Casarosa cited it as an influence), along with everything from Disney’s “The Little Mermaid” (which borrowed its shark sequence from “Future Boy Conan”) to “The Last Jedi” (Luke’s bunker looks awfully similar). A visual feast presented beautifully thanks to a new 4k restoration, plus English subtitles and a dub, and a new 16-page booklet featuring production artwork.

For the classic film fan in your life, the second volume of the Columbia classics Collection is an excellent find. This limited edition collection includes “Anatomy of a Murder,” “Oliver!,” “Taxi Driver,” “Stripes,” “Sense and Sensibility” and “The Social Network” all on 4K Blu-ray, Blu-ray and Digital HD.