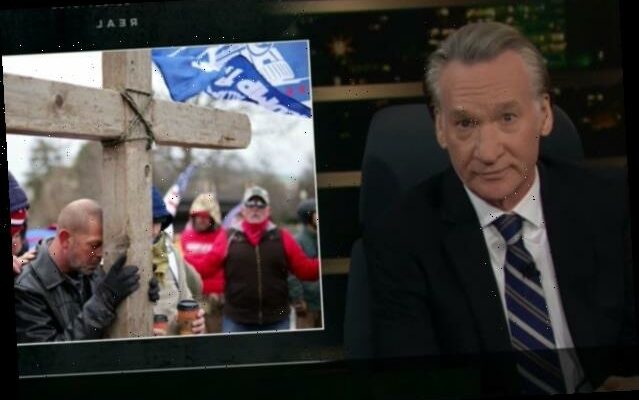 QAnon and fundamentalist Christians “go together like macaroni and cheese,” Maher says on “Real Time”

Bill Maher dove headfirst into ripping Trump supporters who are evangelical Christians on the latest episode of HBO’s “Real Time.”

During his weekly “New Rules” segment, Maher eviscerated Christians and the Book of Revelations, which he argued was  just as insane as the conspiracy theories spread by QAnon. Maher also said Trump-supporting conservatives who are still convinced the 2020 election was rigged in favor of President Biden are part of a “mass delusion.”

“There’s a lot of talk now… about how Republicans should tell their base who still believe the election was rigged that they need to grow up and move on and stop asking the rest of us to respect their mass delusion,” Maher said Friday. “Of course it is a mass delusion. But the inconvenient truth here is that if you accord religious faith the kind of exalted respect we do here in America, you’ve already lost the argument that mass delusion is bad.”

Maher argued that it shouldn’t be surprising, then, that most of the senators who objected to certifying the electoral college votes for Biden were also fundamentalist Christians. And many of Trump’s supporters, the host contended, follow the former president with a god-like reverence that is often very tied up in their religious beliefs.

“When you are a QAnon fanatic, you’re also a fundamentalist Christian. They just go together like macaroni and cheese or chardonnay and Valium,” Maher said.

During his monologue, Maher pointed out the irony that the separation of church and state, which the United States was supposedly founded upon, has eroded. He also noted that the Jan. 6 attack on the U.S. Capitol incited by Trump was full of religious imagery, including signs that read, “Jesus is my god and Trump is my president” and “Trump/Jesus 2020.”

“That insurrection looked like a revival meeting,” Maher quipped.

“It’s fun to laugh at QAnon with the baby-eating lizard people and the pedophile pizza parlors, but have you ever read the Book of Revelations? That’s the Bible, that’s your holy book, Christians, and they’ve got… stuff you only see after the guy in the park sells you bad mushrooms,” he joked.

The host then turned to railing against evangelical Christian lawmakers like Ted Cruz and Paul Gosar, who tried to overturn election results by baselessly claiming the 2020 election was “stolen” from Trump. Cruz and Gosar were among a group of senators who objected to certifying electoral college results in Arizona, along with Senators Josh Hawley, Cindy Hyde-Smith, John Kennedy, Roger Marshall and Tommy Tuberville.

Maher pointed out that each of those senators also identified and campaigned as fundamentalist Christians — in particular Alabama Sen. Tuberville, who even filmed a campaign ad equating Trump to Jesus. Maher cut to that ad and played a clip where Tuberville says Trump “was sent to us because God knew we were in trouble.”

A longtime outspoken critic of nearly all religions, Maher has referred to himself as agnostic in the past and has said that he thinks all religions are “stupid” and dangerous.

“Magical religious thinking is a virus and QAnon is just its current mutation. That’s why megachurches play QAnon videos,” he said on Friday. “We need to stop pretending there’s no way we’ll ever understand why the Trump mob believes in him. It’s because they’re religious… They’ve already made space in their heads for sh– that doesn’t make sense.”

Watch the entire clip of Maher’s “New Rules” segment above.