Tyra Banks’ recent comments about the popular Bravo housewives is not sitting too well with one OG.

It seems Real Housewives of New York alum Bethenny Frankel has caught wind of the supermodel’s negative remarks about the show.

And she has issued a snarky response on social media.

Tyra, who is the new host of Dancing with the Stars, doesn’t want any of the Bravo reality stars to participate on the popular dancing show.

At least, that’s what an insider is alleging.

Apparently, the supermodel thinks that these OG housewives are no longer relevant, and won’t bring any ratings to the show.

Well as you know, Frankel is not one to hold her tongue and she has a response for Banks.

Bethenny has a message for Tyra Banks

The B Strong founder took to Twitter yesterday after news broke about Tyra Banks– and her stance on not wanting to cast anyone from the housewives franchise.

The former RHONY OG made it clear that she did not appreciate being roped in the mix.

“Good to know @tyrabanks has clumped me in her no more housewives mandate,” says Bethenny, while tagging the DWTS host.

In the post, she also expressed that she knows the casting director for Dancing with the Stars and says, “I’m also no longer a housewife but nobody is bigger than the game Tyra.” 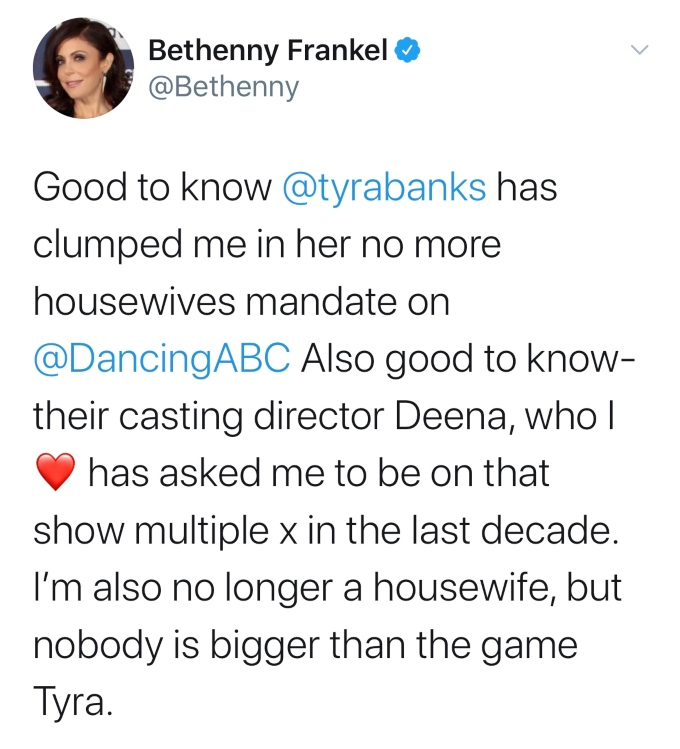 What did Tyra Banks say?

So what exactly did the 46-year-old say that has the Skinny Girl CEO up in arms?

Well, it all started when a source revealed some interesting news to OK Magazine, saying that the former America’s Next Top Model judge is not a fan of the housewives franchise.

And, that she has banned the Bravolebrities from appearing on the ABC dancing show.

“Tyra is the new boss and made it clear that she didn’t want any more Housewives in her ballroom. She thinks the show needs to aim higher and only book the ladies after everyone else has passed,” shares the insider.

However, the source alleges, “The real reason she doesn’t want them on her show is that Bethenny Frankel, NeNe Leakes and Teresa Giudice do not make headlines anymore.”

“Tyra wants reality stars like Carole Baskin from Tiger King — not a decade-old franchise that no one talks about anymore. If Tyra thought for one minute that the Housewives would get her show ratings, she would welcome them to the dance floor in a second.”

Now that Bethenny has clapped back at Tyra Banks, do you think Nene Leakes and Teresa Giudice will have a word for the DWTS host as well?

Dancing with the Stars airs Mondays at 8/7c on ABC.