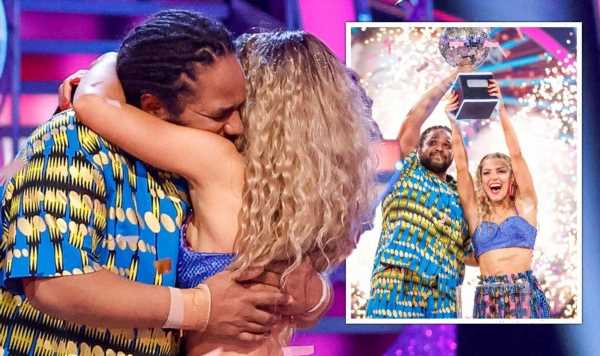 The BBC has been dealt a huge blow as the final episode of Strictly Come Dancing 2022 was watched by a peak audience of 9.6million people. This is almost two million less than the year before when Rose Ayling-Ellis lifted the Glitterball Trophy with Giovanni Pernice.

Along with Fleur East, Helen Skelton and Molly Rainford, the Countryfile cameraman did everything he could to win the public’s votes.

He was announced as the latest Strictly champion and broke down in tears as he lifted the coveted Glitterball Trophy.

But despite the win for Hamza, the BBC lost out as their ratings for the dance competition plummeted.

It’s been reported the overnight ratings were the lowest they have been for the final for years.

It’s not the first time Strictly has taken a hit in the ratings.

For the series launch in September, only 5.4 million viewers tuned in with a peak audience of 5.6 million.

This was down considerably on 2021, which saw a peak audience of 7.3million tune in.

Hamza said of his win: “I am absolutely over the moon, I can’t believe it.

“I didn’t believe I would make it past week one, let alone make it to the final and lift that Glitterball.

“This wouldn’t have been possible without Jowita, she have been my absolute rock through this entire experience and I wouldn’t have wanted this journey with anyone else, and for that I will be eternally grateful.

“I can’t put into words what this means to us and I’m so thankful for everyone who has voted, it’s made the long hours of training and hard work worthwhile.

“Everyone deserved to win tonight, the performances were outstanding, and it was such a brilliant final which topped off the most amazing experience.”

Jowita added: “Thank you so much to everyone who has voted for us.

“ I am so proud of Hamza, the sheer amount of hard work, determination and courage he has shown over the past 13 weeks has been incredible.

“I never thought I would be lifting the Glitterball on my first year as a Strictly Pro!

“We are so grateful for all the support and love we’ve received, it’s been an amazing journey, and I’ve loved every minute of it.”

Hamza is expected to be a big star on the BBC following his win, with rumours he could be offered a six-figure salary.

A source told The Sun: “Helen are Hamza are well thought of at the BBC and the executives are delighted at how the show has boosted their profiles.

“They’ve wanted some sensational stars to emerge in Strictly this year which is a ‘full’ show for the first time since it was scaled back by Covid two years ago.”

They added: “The Beeb are keen to build on that and make sure they stay with the BBC, which is where they’ve both developed their careers so far.”

Strictly Come Dancing: The Final is available to catch up on BBC iPlayer.