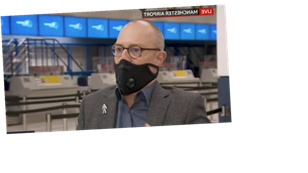 Viewers were left unimpressed by an interviewee on Monday morning’s BBC Breakfast after they failed to wear their mask correctly while being interviewed by Jayne McCubbin at a Manchester airport.

Easter Monday is usually one of the busiest times for UK airports however due to the pandemic Jayne gave viewers and insight into how quiet the airports are.

Jayne interviewed certain passengers who were travelling for work and also for education, but viewers were left rather disturbed when Jayne interviewed travel agent, Phil Nuttal from Blackpool regarding his views on the travel industry.

While the interview proceeded BBC breakfast viewers noticed that Phil, wore his mask incorrectly and it had failed to cover his nose.

Jayne asked Phil about the new travel traffic light system that is being proposed by the government and what travellers should expect going forward.

Travel agent Phil explained: "The most important thing to recognise is you try and package [the holiday] yourself you run the risk.

He explained: "If the traffic light system changes or potentially changes, you might run the risk of losing some of your money”

Though Phil was making sense of the situation. Many viewers couldn’t help notice the evident slip of his mask and how it was not being worn properly.

BBC Breakfast viewers took to Twitter to air their views and concerns.

One viewer wrote: “We’re now a year in and some people have still not worked out how to use their face mask..”

Another said: “I was more interested in whether the travel agent's mask would fall below his nose rather than what he was saying. #BBCBreakfast.”

A third wrote: “Who going to listen to a bloke advocating travel that can't even wear a mask properly? #BBCBreakfast.”

While another penned: “12 months, doesn't know how to wear a mask #BBCBreakfast”.

However some viewers were more sympathetic, one wrote: “@bbcbreakfast #BBCBreakfast people moaning about how he’s wearing his mask … he may have a clip behind his neck. I’ve done that before when my ears hurt. Just saying.”