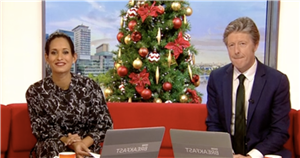 BBC Breakfast presenter Naga Munchetty was fuming during Friday's instalment of the morning programme, as she made a huge Strictly blunder live on-air – leaving her co-stars in hysterics.

Naga was joined by Charlie Stayt on the red sofa, with guest weather presenter Owain Wyn Evans joining in from the studio to present the meteorological report for the day.

But as the show finished up a segment about a same-sex dance studio sparked from the success of John Whaite and Johannes Radebe on Strictly Come Dancing, Naga couldn't quite seem to get her words out.

After the pre-recorded segment, Naga said of Strictly: "That programme has opened up so many possibilities and so many different combinations of dancers, making it so much more accessible.

"Of course, cr-cr-Strictly! Can't get my words out!" she told Charlie.

He told her calmly: "Try it again."

But as Naga began her sentence over again, Charlie interrupted her to say: "We've got plenty of time, just take your time" – time enough, it seemed, for Naga to give him a withering look.

A giggle could be heard in the background as Naga went on: "The Strictly Come Dancing final is this Saturday at 7pm."

And Charlie explained: "If you can hear someone giggling there, it's Owain [Wyn Evans] over there." He went on to warn the weatherman: "You need to make sure you're word perfect, Owain, in just a moment when we come to you!"

Owain fired back: "Has that ever happened?"

Deciding to reassure Owain, Naga jumped in: "It happens to us all! I'm going to save you with a gorgeous image, save your words!"

A glorious sunset image then appeared on the screen to precede the weather forecast, as Owain said: "Oh, look! Stunning."

Naga said: "We showed the sunrise earlier this morning, and that was beautiful. It had that lovely pink hue on the horizon. And you were explaining about Rayleigh scattering clouds, and then this – the sun coming up now!

"Looks like it's going to be a lovely day in Salford Quays, that high pressure you've been talking about making an impact."

She then took a cheeky swipe at Owain as she said: "See, I listen to you – stumbles and all!"

"I'm going to say 10 out of 10 for listening to the weather forecast," Owain told her.

But Naga wasn't satisfied, as she said: "Do you know what? It's too late, Owain."

Through his giggles, Owain managed to say: "Apologies, apologies!"

BBC Breakfast airs from 6am every day on BBC One.