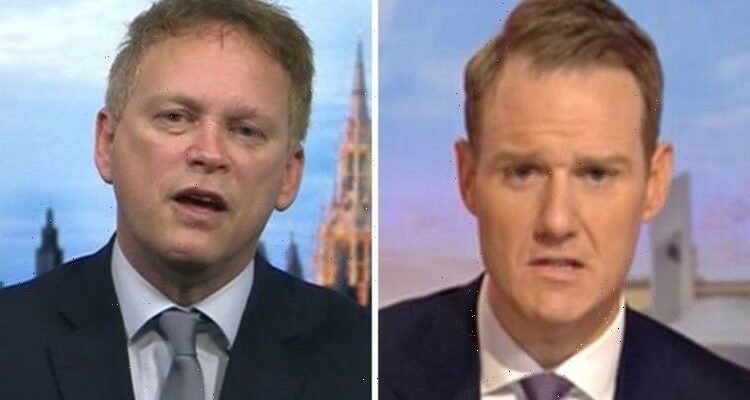 Both BBC Breakfast presenter Dan Walker and MP Grant Shapps were criticised online by BBC viewers over the interview, which saw Shapps asking the journalist to focus on the “good” things achieved by the government rather than question him over the latest Boris Johnson party scandal. Some explained they were forced to “switch off” rather than watch the conversation unfold.

It comes as allegations of yet another government party, this one for prime minister Boris Johnson’s birthday, have come to light.

In the week of Sue Gray’s investigations into previous lockdown breaches by the government, Walker began the interview by asking for Mr Shapps’ take on the last 48 hours.

“Another day and another allegation of a party,” Walker stated.

“Thought I was here to tell your viewers the good news about scrapping all international tests, but happy to take any other questions,” Shapps replied with a chuckle.

“We will come to, as you say, that good news in a moment,” Walker responded.

“But I just think it’s important to deal with some of the issues and some of the frustrations I think many of our viewers will feel this morning.

“As the piece there was talking about, it’s been an interesting 48 hours – the inquiry into Nusrat Ghani allegations and Lord Agnew.

“And, another day, another allegation of a party, this time for the prime minister and his birthday.

“Can you tell us what do you know about that event, were you there and what is your response to it this morning?”

“No, I wasn’t there,” Shapps stated. “I know that this is a group of people who worked together all day long, will have had meetings many times together as necessitated by the pandemic.

“A response and on the prime minister’s birthday, as had happened earlier in the day when he’d been given a cake – he was given a cake.”

Shapps criticised the BBC’s coverage of the latest claims, insisting: “But I think what was interesting about your report was that it didn’t sort of highlight the other things that have been going on.

“The fact that we have been able to release people from working from home, from the international travel restrictions – the 37 million people who’ve had boosters, the fact we have the fastest-growing economy and the many other good things that have happened.”

Laughing again, he added: “I don’t want to accuse that of being a rather one-sided report but there have been rather a lot of better things happening which have been the result of making very good decisions, particularly on the handling of Omicron that this country is coming out of fastest and first.

“I think a more balanced view would be, ‘yes it’s difficult in government but there have been many things which we are getting right under difficult circumstances’.”

“But I just don’t think ‘it’s difficult in government’ will wash with many people watching,” Walker argued.

But the tone of the interview and style of questioning left many reaching for the remote control.

Twitter user Sara K wrote: “That time of day when I temporarily turnover while @BBCBreakfast has a Tory on defending yet more sleaze! #BBCBreakfast #HasHeGoneYet.”

Warren penned: “How can anything that @grantshapps says be considered truthful and credible? A liar telling lies to cover for a liar. #BBCBreakfast.”

Asphalt_World argued: “No one is perfect, says Grant Shapps. That’s OK then. In other words, yet more proof that the Torys believe they can do anything and brush it off. #BBCBreakfast #gmb.” (sic)

“It’s like distraction bingo. All the classics coming out in defence of the indefensible: ‘got Brexit done’, ‘fastest-growing economy in the G7’, ‘vaccines’, ‘Sue Gray’. #BBCBreakfast #ToryLiars #JohnsonOut.”

Timothy Boon slammed Walker’s interview, writing: “Like watching a game of top trumps and Dan you’re not up to it #BBCBreakfast.”

Some, however, thought the presenter did a good job, with Neil Whelan commenting: “Fair play to Dan Walker for shutting down Grant Schapps’ easily disprovable claims about the ‘government’s covid ‘successes’, using his own example against him and dragging him back to the ‘prime minister’s lies and corruption. #BBCBreakfast.”

BBC Breakfast airs daily at 6am on BBC One.